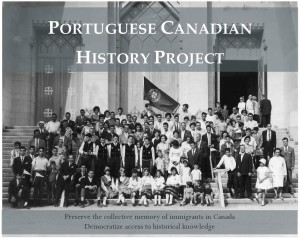 Like many initiatives, the Portuguese Canadian History Project (PCHP) started with a conversation over coffee. Brews in hand, historians of the Portuguese-Canadian experience, Susana Miranda and Gilberto Fernandes, hashed out the basis of the PCHP. It was 2008, with Susana knee-deep in her research on Portuguese-Canadian workers in the cleaning industry and Gilberto continuing his work on the Portuguese Diaspora, both agreed that the history of the Portuguese-Canadian experience, so inadequately represented in public archives, was in danger of being lost. The answer? Find, assess, and not only ensure that documents, ranging from private photographs to newspapers to the papers of community organizations, found their way to an archive where future generations could explore their past, but also that the history contained in community documents would end up back in the public realm.

By the time I had joined the PCHP in 2009, Gilberto and Susana had been entrusted with a number of collections. Organizations like the Portuguese Democratic Association (an anti-fascist organization with links to an international network of exiled Portuguese in opposition to Salazar’s regime) and the Portuguese Interagency Network (a Toronto based agency established to help Portuguese-Canadians gain access to Canadian social services), and individuals including community activists like Domingos Marques and Ilda Januário, saw the importance in what the PCHP was doing, and so, donated their files to be archived. With Gilberto and Susana holding these, and other, collections in their apartments and parents’ houses, we set out to find a home for the community’s documents. Our priorities were to find an archive that would allow public access to the documents and also provide a forum for the PCHP to share the history found in the community’s collections. After a few dead-ends, we were directed to the Clara Thomas and Special Collections at York University. Clara Thomas – housed in Scott Library – fit the bill! They were happy to archive the community’s documents and, with their experience in digital initiatives, to provide the PCHP with the infrastructure and support to create the exhibits we wanted to offer back to the community.

The PCHP’s first step in developing a public history programme was to create a virtual museum that would offer exhibits presenting aspects of the Portuguese-Canadian experience. The official launch of our first two exhibits is set for October 12, 2011 (see the attached poster and all are welcome!). The first exhibit looks at Comunidade, a newspaper developed and published by Portuguese-Canadian activists between 1975 and 1979. Started by members of the Movimento Comunitário Português, a group that worked out of Toronto’s West End YMCA, Comunidade was a unique Portuguese-Canadian newspaper in its left-leaning politics and in its focus on events in Toronto, as opposed to in Portugal. By using photographs and documents donated by Domingos Marques – a former editor-in-chief of Comunidade – to the PCHP and Clara Thomas, and video interviews we conducted with Sr. Marques, our exhibit discusses the contributions that Comunidade made to both the Canadian and Portuguese-Canadian experience while placing it in its unique historical context. 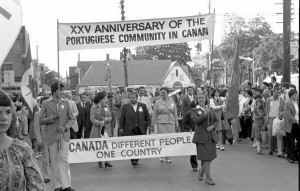 The late 1970s – with the revolution still fresh in Portugal, the Cold War about to enter another phase of heightened tension, and the social, cultural, and political emergence of a group of new and 2nd generation Portuguese-Canadians – were also the backdrop to our second exhibit: an exposition of Gilberto Prioste’s photographs. A Portuguese-Canadian photographer, Prioste took these pictures as an adolescent who, as he explains in the videos that accompany the exhibit, was trying to explore what the Portuguese-Canadian community was, and how he fit into it.

The coordinators of the PCHP – Dr. Susana Miranda, Gilberto Fernandes, and Raphael Costa – can be reached at prtcan.history@gmail.com. Or, follow our blog at http://archives.library.yorku.ca/pchp/.

One thought on “A Past for the Future: the Portuguese Canadian History Project’s Virtual Exhibits Exploring the Portuguese-Canadian Experience”