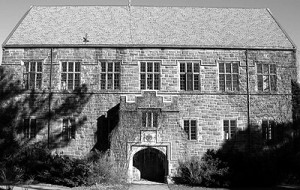 The failed campaign to “Save the Memorial Library” (STML) at Mount Allison University is a fascinating study of the importance – or, lack thereof – of history in contemporary Canadian culture. For the better part of the past nine months, a small but determined group worked to stave off the demolition of Mount A’s largely unused Memorial Library building. The Library was built in the 1920s to commemorate World War I dead but has not been used as a Library for at least a generation. The campaign organized an on-line petition, wrote a never-ending stream of letters to the editor, and even urged students to make a human chain around the building to protect it. My aim is not to wade post hoc into the merits of this campaign. Instead, my goal is to look at the STML controversy from perspective of “active history”: what does this debate over the Library tell us about history and historical culture in Canada today? What can those of us interested in “active history” — the dynamics of history in contemporary life — learn from this contentious issue? Clearly, I can’t address this entire issue in one short blog, but I will suggest that there are several matters to which we should pay attention.

First, those interested in active history might note that history has been both omni-present and strangely absent in this controversy. The STML campaigners argued that Library was a “cenotaph” (a war memorial), that it was architecturally important, that old buildings should be preserved because they are particularly attractive, that it was a site of memory, that it is an ethical trust to preserve memorials, and that those favouring destruction are not connected to local history or culture. To sustain their case, the STML campaign referred not simply to memory but to local pride and ethics: the living had a moral responsibility to remember the dead. This point was reinforced with reference to archival sources that supposedly provided irrefutable proof of their case. In short, STML was about history and how history should be honoured and respected. The level of emotion it engendered demonstrates how intense debates about history can become.

Yet, history was also completely absent. I am not faulting anyone, but making an observation. To the best of my knowledge, not a single professional historian was interviewed for a Memorial Library news story. The STML campaign did not ask a single professional historian to assess their case (or, help them make it); no trained architectural historians were asked about the value of the building; nor was any historian asked about the use of archival evidence. In short, the STML campaign did not feel that they needed historians to make an argument about history, conduct historical research, weigh archival evidence, or assess the historical value of architecture.

Nor was the STML campaign alone in ignoring professional historians. It seems that the wider community didn’t feel the need for historians, or even (at times) for history. The STML campaign is the work of a relatively small group of intensely committed people. The degree to which the university community engaged this issue is a matter of debate. One example: the student body (despite urging from activists) ignored the issue. In a recent issue of The Argosy, a student leader noted that not a single student had asked the student council to take a stand, one way or another. A court case seeking an injunction did not involve any historians as witnesses; nor, from what I understand, did the provincial minister who denied an application that would have converted the Memorial Library to a heritage site.

This might not lead to particularly positive conclusions about the relevance of professional historians, but it is also true that few historians seemed particularly interested in wading into this controversy. Mea culpa. Historians were neglected but they also opted out. Am I odd in thinking that people who have devoted their professional lives to the study of the past and its meanings had nothing to offer? The STML controversy demonstrated an interesting characteristic of contemporary historical culture: it does not seem to need or want contributions from historians while historians don’t seem particularly interested in engaging at least some historical issues.

For me, the role of historians is not to arbitrate historical significance, but I do think that an opportunity to engage the meaning of the past has been missed. Engaging this issue carries a risk because historians needed to confront the different sides with tough questions about the complexity of the past, the character of war and its effects on Canadian society, and how and why people die and kill in the name of the greater good. For example, the STML campaign mobilized a war narrative that was shockingly simplistic and, according to the best scholarship we have on WW I, inaccurate. The STML narrative never moved beyond a “Coach’s Corner” Cherryesque discourse. All dead “paid the ultimate sacrifice” and “gave their lives for us.” The politics and ideology of World War I and its effects on Canada were never discussed.

Effectively engaging this issue required making people uncomfortable by disrupting cherished storylines (whether about sacrifice or archival evidence). It seems to me that the historians (again, mea culpa) who could have engaged this issue shied away for precisely this reason. Perhaps that is the most important lesson to learn: an active history will not necessarily earn historians any brownie points. Active history requires courage because it may make historians unpopular. If we want to contribute a new relevance for history, however, this may be a price we need to pay.

Andrew Nurse lives in Sackville NB and teaches Canadian Studies at Mount Allison University. His current research focuses on the history of participatory democracy and the history of arts activism in Canada. He can be reached at anurse [at] mta.ca.

9 thoughts on “The Memorial Library: History without Historians”