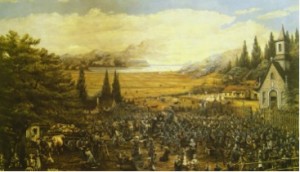 According to a poll conducted for the Toronto Sun, over eighty per cent of Canadians support the decision of Jason Kenney, Minister of Citizenship, Immigration and Multiculturalism, requiring face veils to be removed during the swearing of the oath of citizenship.  These results were consistent across all age-groups, regions and political affiliations.  I had the same initial reaction to what seemed a reasonable decision.

But I started thinking about another oath of allegiance controversy.  After France ceded Acadie to Great Britain in 1713, the inhabitants were given the choice of leaving the colony or staying and becoming British subjects.  Since most Acadians elected to remain, officials required them to take an oath of allegiance to their new monarch.  The colonists equivocated, requesting guarantees that their property rights and religion would be respected and that they would not be conscripted.  The governor eventually agreed to these conditions and the Acadians duly swore.  During the 1740s, however, when war resumed between France and Great Britain, the Acadians were once again pressured to take an unconditional oath of allegiance.  They refused, believing that such an oath was intended to commit them to taking up arms against the French.  Lieutenant-Governor Charles Lawrence cited this as proof that they were secretly enemies and gave the order to deport them.  Several thousand men, women and children were imprisoned, loaded on boats and shipped to Britain’s other American colonies.  About one-third of these unfortunates died from disease, accident or starvation and the remainder suffered impoverishment, isolation and discrimination as dangerous traitors.  A few thousand other colonists escaped the ships and fled to the woods, suffering their own hardships, illnesses and deaths as refugees.  Some were eventually captured and deported anyway, while others made it to Québec, just in time for that city, too, to fall to the British.

Why all of this over an oath?  The truth is that the oath was a symbol for a larger problem: prejudice, anger and fear.  A century of often brutal war had characterized British-French relations in North America.  French and Aboriginal raids on British settlements were well-remembered.  The British officials never trusted the Acadians – French Catholics presumed to remain loyal to France and close to the Mi’kmaq.  A few of their priests were notorious in fomenting rebellion.  They spoke, worshipped, dressed and behaved differently from other British subjects.  It did not matter that only a handful of the over ten thousand Acadians ever actively supported the French cause.  What the British saw was thousands of potential enemies and rabid clerics trying to stir them up.  Significantly, the decision to deport came shortly after news that General Braddock’s army had been soundly defeated in the North American interior by the French and their Aboriginal allies.

Does any of this sound familiar?  There is a lot of anger and fear about Muslim fundamentalism in North America today.   We remember 2001.  We think about the loss of our soldiers in Afghanistan, the rhetoric of radical imams calling for the destruction of western society, the threat of Iran to global peace and the violent repression in countries like Syria.  High profile murder trials like that of the Shafias and ever-increasing security measures at airports, border crossings and public buildings constantly remind us of the danger here in Canada.

I realized that it was my unthinking connection of face veils to fundamentalism that fuelled my gut reaction to Kenney’s decision.  The oath controversy was a proxy for my anxiety and fear.  These women look different, behave differently and share the same religion with a small group of radicals inciting violence and hatred in the world.  That does not mean that all Muslims wearing face veils are potential enemies, faking the oath in order to implant themselves in our society.  Nor does it mean that their fathers and husbands are a fifth column of terrorists waiting for the right moment to strike.  I associate veils with the oppression of women, but maybe this is not always a fair assessment.  After all, our hyper-sexualized standards for female dress can be demeaning and objectifying too.  I challenge you to find an appropriate bathing suit for a ten year old girl.  A newcomer to Canada might be more comfortable covering themselves and their children.  At the same time, choosing to immigrate to Canada is likely to reflect openness to change and a desire for peace.

It is easy to chest thump about loyalty to the nation.  Yet native born Canadians never have to swear an oath.  What does the oath of allegiance mean, especially one to a faraway figurehead monarch?  What are our duties as Canadian citizens?  The government helpfully provides a list.  We must obey the law and serve on juries.  We should vote.  Further, “getting a job, taking care of one’s family and working hard in keeping with one’s abilities are important Canadian values.”  Newcomers are encouraged to volunteer in their community and play their role in preserving Canada’s environment and heritage.  Needless to say, by these standards, a large proportion of both native-born and immigrant Canadians should have their citizenship revoked.

Does singling out women wearing face veils as potential traitors really protect Canadian society?  What potential repercussions could result from playing on public anxieties about Muslim fundamentalism?  This may be a popular decision, but, is it the right  one?  We can learn from our past.  The deportation of the Acadians, the creation of reserves and residential schools, the internment of Canadians of Japanese and other “enemy” ethnicities during the world wars; these were all popular decisions motivated by anger, fear and prejudice directed towards people who were different, but who were not really a threat.  We can do better.

Gregory Kennedy completed a PhD at York University in 2008 and is currently an Assistant Professor at the Université de Moncton.  A specialist of pre-Confederation Canada and Acadie, his research interests include social, demographic and economic history, particularly using comparative and quantitative approaches.

5 thoughts on “Learning from History: What is Popular is not Always Right”