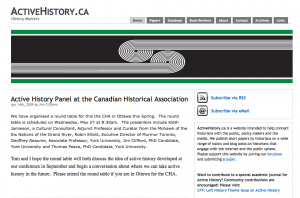 Three  years ago, in the lead up to the Canadian Historical Association meeting, Christine McLaughlin, Ian Milligan, Thomas Peace, Jay Young and I founded ActiveHistory.ca.  At the time we were all graduate students in the history department at York University. The website emerged out of the Active History symposium held in September 2008. Having budgeted to disseminate the conference proceedings, we considered publishing an academic book or a special issue of a journal. But these options, we thought, seemed counter to the public outreach goals of the symposium. Instead we decided to launch a website that embodied the Active History mission, instead of simply publishing some of the essays presented at the workshop (though, Ian Milligan also worked with Left History to publish a special issue).

We launched a website with a certain amount of trepidation, as the conference attendees did not show much enthusiasm for submitting blog posts either before or after the workshop and there were not too many examples in Canada of successful history websites (Christopher Moore and Andrew Smith being the major exceptions to that rule). While cleaning up some papers one day I stumbled on a flyer for a British website called HistoryandPolicy.org. I thought I had found a model for a successful academic website.

The early months in the ActiveHistory.ca archive reflect our orientation towards Papers similar to those published by History & Policy. We issued a call for papers and published three submissions through to the end of 2009. This approach attracted some web traffic, but as Chrisopher Moore quipped in September 2009, ActiveHistory.ca needed to be a little more active. In November the Canadian Government published a new Citizens Guide and spurred Thomas Peace to write a short reaction piece. During the days that followed we watched our visitor stats jump significantly and realized people were linking back to our website. This quickly ended our reluctance to embrace the “blog” format and in the months that followed we started posting weekly Monday contributions from the editorial collective. During this same time period we started to embrace social media and started Facebook and Twitter accounts for the website. These two steps contributed to the significant growth of the website in the months that followed.

In the two and a half years since the blog started in earnest the visitor stats have grown from a few hundred visits a month, to a couple of thousand and now more than ten thousand during our best months. Our authors include a large number of regular contributors, dozens of one-off authors and six members of the editorial collective. One of our ongoing challenges has been to spread beyond our base at York University in Toronto. While none of the founding editors are originally from Toronto,  it is the city where most of us still live and this leads to a lot of focus on Southern Ontario. Thankfully we continue to add contributors from across Canada and even a few posts from people living further afield. Moreover, the editorial collective now includes three historians at universities outside of Toronto, with Krista McCracken at Algoma University, Ian Milligan at Western University, and Thomas Peace at Dartmouth College. The paper section continues to fluctuate in terms of submissions, but some of the essays, including Gérard-François Dumont’s The Berlin Wall: Life, Death and the Spatial Heritage of Berlin, remain some of our most visited webpages.

In addition to the blog and papers section we have also developed a number of additional features on our site. There is a book review section managed with the help of David Weber and George Buri.  We have cultivated a series of partnerships with the Canadian Historical Association, the Mississauga Library System, The History and Education Network, and various departments of the City of Toronto. In the fall, we look forward to an expanded Podcast section and directing more attention to the papers section of the site.

After three years it came time to renew our hosting service and we are very grateful that the history department at York University and the Avie Bennett Historica-Dominion Institute Chair in Canadian History, also at York University, both made sustaining contributions.