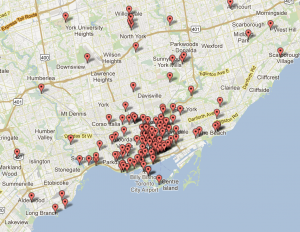 Luckily, they’re all digitized online. From these text files, we can learn a few things: where they’re located (and make an interactive map!), what they’re about (through topics), and what time periods they cover. From this, a few conclusions can come: that yes, there’s some truth to the fact that they do deal with topics of political, economic, and well, elite importance. They do skew towards the 19th century, although a surprising number of plaques discuss the late 20th century. Why? Read on!

How can we learn about them?

Toronto’s historical plaques have been photographed, transcribed and geo-referenced online at torontoplaques.com. Each plaque has its own website, with one or several high-quality photographs, the transcript of the text, and a static (non-interactive) google map telling you where it is. These are each interesting on their own merits, but what if we then pull our gaze back and start thinking about taking the collection of almost 600 plaques as a whole. Luckily, we can spider these files (use a computer to download them en masse, without having to do it all individually) and start interacting with the text.

A Map for Each Plaque is Nice – what about them all?

Each individual page has the geo-location of where the plaque is, such as 43.675740 -79.371586 (where the plaque for “Edward S. Rogers, Jr., inventor of the “Batteryless Radio” sits). You’ll notice if you Google that location, you’ll actually see the position of it in Google Maps (as well as the answer to the subtraction question, if you were so inclined). If we take all those coordinates, we can plot them all on a map. If you feed the lines into batchgeo.com, you can get the following:

Here we see some broad strokes: the earliest part of the city, now the eastern part of downtown (centred around King East). Clusters at universities. Parks seem to hold many. Most are located near arteries, although you could find a few tucked away that might be a good little adventure. While there are some on their own, they do seem to travel in pairs. Some neat heritage trips might come out of such a map. It reinforces and complements some of Tom Peace’s earlier discussions about the geographic, thematic, and temporal clustering of Toronto’s heritage.

Ok – so we know where they are. What are they about?

Luckily, historians now have a few tools up their sleeves when it comes to these. We could read each plaque individually, or we could try to employ some distant reading techniques. The most basic of these is a word cloud. Using a program like wordle.net, freely available online, basically what we’re doing is counting words: the more often it appears, the bigger we see it on the screen. Word clouds have been heavily critiqued lately: they don’t provide any context, they can be misleading, and they can sometimes dazzle rather than elucidate. All true. But they’re also accessible, fun to play with, and are the “gateway drug” into digitally exploring the past. So what if we throw the full text of every plaque into a word cloud?

A wordle.net visualization of plaques. Again, not the be all and end all, but that doesn’t mean you can’t learn _something_ from it.

Again, this isn’t going to tell you everything you want to learn. But we can at a glance see that we’re talking about Toronto plaques (duh!). But plaques are concerned with “firsts” – the first building, the first person to invent something, the first bank, the first church, the first – etc. Buildings are common, churches, colleges, schools, civic institutions that are celebrated. We can even see some common names: James, William, John. No women (although ‘women’ appears as a very small word).

We can then pull out all of the years, see how often they appear (I’m doing this in a proprietary program, I’m afraid, but you could pick out such info using some basic programming techniques [like in the Programming Historian 2!]):

How often do the years between 1600 and 2000 appear in this collection?

What we have here is actually two different phenomena. Firstly, we can see that Toronto was settled by Europeans in earnest in the late 18th century, that we have spikes throughout the 19th century that outdo any subsequent years. Confederation is not a big deal in Toronto plaques, but the 1830s and 1840s unsurprisingly are. The inclusion of later years actually reflects additions made to plaques, i.e. “the building was repurposed as a bank in 1999” or “renovated in 1986”, part of an effort to keep these plaques reflective of the actual site.

Finally, we can use one last trick, which is topic modelling. Topic modelling has some complicated underlying mathematical formulas, but basically it takes a document (in this case all the plaques), finds important topics or categories, and then finds that these topics/categories actually contain some words more often than other topics. It then picks these words out as representative of the topics. The results are cool. For example, let’s pull out ten topics:

Some of these topics are self-explanatory, others require deeper investigation. Luckily, we can find the archetypical plaques that match up with these topics if there are any ambiguities. From some spelunking, we can learn the following topics exist. The first is generally referring to architectural styles of national significance, within an international context (i.e. places like the TD Centre, etc.). There is a category of early communities within Toronto, mentioning churches, mills, settlements at york mills, churches, etc. Others deal with natural areas (parks, rivers, creeks). Others include topics on wars, social life, architecture (a lot of architecture!), the arts, educational uses, and civic institutions.

You can learn a lot if you stroll around a neighbourhood, taking in each plaque. But if you pull back, way back, you can learn a lot from a distant reading of historical plaques. And hopefully have some fun doing it!

Hope you all had a fantastic summer!

Ian Milligan is an Assistant Professor of History at the University of Waterloo.

8 thoughts on “What Counts as History in Toronto? Digitally Exploring Toronto’s Heritage Plaques”