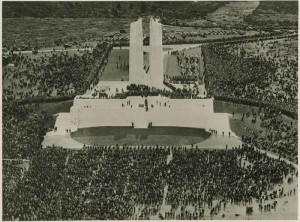 It is very strange to celebrate the start of a war. Nonetheless, this is exactly what we have done here in Canada over the past year. The War of 1812 spanned from June of 1812 through to February of 1815, but this did not stop our government from starting their celebrations of the “Fight for Canada” during the 200th anniversary of the first months of the war. Perhaps they felt the need to keep the schedule open to celebrate the start of another war in 2014.

Canadians commemorate the end of the First World War yearly on Remembrance Day (November 11th), and with memorials, from Vimy Ridge to village cenotaphs. These monuments and sites of remembrance generally bring a somber tone, focus on the sacrifices of war and provide limited space to celebrate the glories of victory.

I hope that any additional events and publicity will bring the same tone, but considering the fanfare for the War of 1812 and the historically dubious claims that we stood side by side and “won the fight for Canada,” I worry that we’ll face an even bigger celebration of Canada’s role in World War One. The United Kingdom government recently announced plans to spend £50,000,000 to commemorate the war starting in 1914 and the Australian government has budgeted $83,500,000. Assuming the Canadian government will spend a similar sum of money, the question remains: Which First World War will we commemorate?

Was it a wasteful and fruitless effort that left millions dead and resolved little? Or was it “a forgotten victory” and a necessary effort to halt German aggression? Did anyone win the war or were there simply different degrees of losers? Was all the death necessary or did the aristocratic generals carelessly throw away hundreds of thousands of lives in their battles of attrition? Was the victory at Vimy Ridge really the ultimate birth of our nation (nudging out 1812 and 1867)?

In Britain, negative view of war, presented by poets like Wilfred Owen and Siegfried Sassoon during and after the war and by numerous historians throughout much of the twentieth century, has come under attack by a group of British revisionists historians. General Haig has new defenders and these historians argue the British, and their allies, were justified in standing up to German aggression to protect liberty and democracy (see Sheffield and Todman).

Unlike Britain’s poetic and historical traditions of denouncing the senseless slaughter, Canada’s war myth is significantly more positive. We focus on Vimy Ridge, the victories of the final one hundred days of the war and the superior quality of our general. Some recent scholarship has argued for a reexamination of these positive interpretations of the war (see Hayes and Sharpe). Other historians refute this revisionist trend and continue to defend the uniquely Canadian competence during the war (see Cook).

Dealt with in all their complexity, these are important historical debates and when I teach the history of Britain and the First World War to university students, I present both sides of the debate. I am worried, however, about one sided and simplistic perspectives being presented in a 30 second fake movie trailer.

We have reached a point in history where there are no veterans of the First World War still living and the numbers from the Second World War are declining. This creates a new distance between the conflicts and young Canadians. Many will worry that it increases our chances of forgetting the sacrifices of those who fought and I’m sure we’ll hear “lest we forget” repeated endlessly. This transition also increases the chances that the tone of remembrance might shift from somber reflection to celebrating victories. Veterans, with complex, ambivalent and sometime negative memories of the events, were a powerful restraint on myth-making and on the political misuse of the war.

From a very personal perspective, I feel a lot more invested in resisting the misappropriation of our commemoration of the First World War to bolster a warrior nation narrative. Claiming that the War of 1812 was a “Fight for Canada” is silly and not particularly effective, as so few Canadians are at all engaged with this distant conflict. The First World War, on the other hand, was very important in the development of many Canadian’s historical consciousness. From elementary school Remembrance Day assemblies, to family stories of lost uncles and shell shocked great grandfathers, and high school or undergraduate history courses, all help Canadians formulated their understanding of twentieth century history. Hopefully this means much of the public will already have some opinions on the war and this will limit the effectiveness of propaganda efforts to recast this complicated history as a moment of nationalistic triumph.

[I would like to thank Brian MacDowall for helping understand the current state of the Canadian historical literature, which I in turn have overly simplified. This would be a great topic for an ActiveHistory.ca paper.]