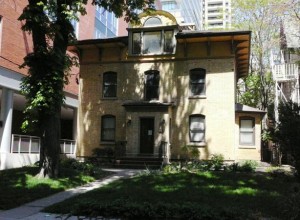 Next year will be the fortieth anniversary of the Canadian Lesbian and Gay Archives (CLGA), which began as a single filing cabinet in the Toronto office of the newsmagazine Body Politic, and has grown into a dynamic organization. We presently have a volunteer board of nine members, a paid general manager, seventy volunteers (forty of whom are very active), and an annual budget of about $170,000.

Since 2009 we have been located in a heritage house at 34 Isabella Street, in the heart of downtown Toronto and the gay village. Unfortunately, the house on Isabella isn’t nearly large enough to house all of our collections, so we also rent a 2,000-square-foot storage space in a modern office building at 65 Wellesley Street, about four blocks away.

When it began, the CLGA was a “total archive,” collecting all manner of items that might be of potential interest to LGBT research. Our focus was on Canada, but we also collected internationally. We have archival accessions of the papers of individuals and organizations, a library, vertical files for ready reference, photographs, artwork, posters, moving images and audio collections, and artifacts such as banners, matchbooks, and buttons. We are particularly strong for the era of gay liberation, which in Canada dates from 1964 to the 1990s. 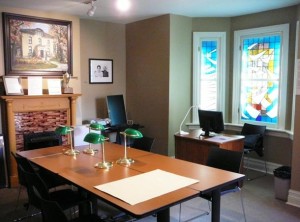 One of our treasures, of international interest, is the collection of LGBT serials: over 8,800 titles dating from the 1930s, from more than fifty countries. It is perhaps the largest collection of its kind in the world, and it takes up more than 215 linear metres at 65 Wellesley Street (the picture below shows about half of the collection). 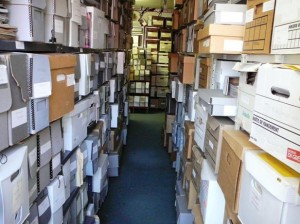 So How Does the CLGA Interact With the Public?

Without public interaction, the CLGA would not exist. First, we are completely independent and community-based. We have no core funding, and must rely on public support (and occasional small grants) to stay open. This involves donations of money, but also donations-in-kind. We have no budget to purchase items for the collections; we depend entirely on donations from individuals and organizations. We are a non-profit charity and can issue tax credits for all donations.

And, of course, we exist not only to collect and preserve materials, but to make them available for research: to independent researchers, students, and professors. We offer set hours for research: Tuesdays, Wednesdays, and Thursdays, 7:30-10 pm, and Fridays, 11-2 pm. All research must be done on the premises; we do not lend items. The CLGA has all the standard archival services such as internal databases for searching materials, photocopying, scanning, photography, and Wi-Fi. Plus, we offer personalized reference service. Public service volunteers are very knowledgeable about the collections, and can also offer research guidance and contacts or introductions to experts in the community or academe.

We get about five to ten researchers per week. Most of these people are undergraduates, graduate students, or academics, but we also have regular visits from journalists and filmmakers. We have always been happy to help students do research. Some of these students from past years are now professors of history or sociology themselves – for example, Elise Chenier, David Churchill, Gary Kinsman, and Becki Ross all used the collections when they were students – and continue to do so for some of their projects.

Advances in computer technology have allowed archives in general to better promote themselves. We have a full slate of tools that help to promote the CLGA’s collections and activities: a dynamic website with some databases of our holdings, a blog, an on-line newsletter, a calendar of events, Facebook, and Twitter.

So What’s New at the Archives?

One of the more exciting developments at the CLGA is the establishment of a regular exhibition schedule in our second-floor gallery at 34 Isabella.

Beginning in 2012 the CLGA’s Exhibition Committee has maintained a steady schedule of displays, readings, and opening parties in the gallery; the gallery space is in fact booked through 2014. Many of the exhibitions have been coordinated or curated by Professor Karen Stanworth of York University. 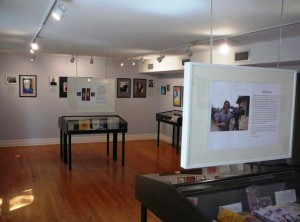 Exhibition highlights throughout 2012 included “Looking Forward/Looking Back: 25 Lives Fourteen Years Later,” a retrospective of the first twenty-five people inducted into the CLGA’s National Portrait Collection in 1998, which was held in May-June.

In June through August we hosted the exhibition “Public Desires/Private Sins: Tracing Lesbian Lives in the Archives, 1950-1980.” The opening party on June 22 marked the twentieth anniversary of Lynne Fernie and Aerlyn Weissman’s film Forbidden Love: Unashamed Stories of Lesbian Lives (1992); Lynne had used the archives when she was doing research for the movie.

Finally, in September-October 2012, we hosted our most popular exhibition to date, “Pushing Buttons,” curated by Wil Craddock. The exhibition featured an overview of historical pin buttons from the CLGA’s collection, displayed in shadow frames and as blown-up photographs. It also included an interactive online exhibition and oral history project, in which members of the public were encouraged to discuss what particular buttons meant to them. 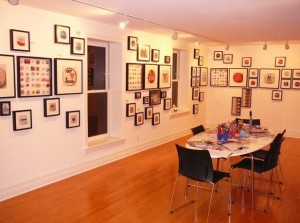 People who attended the exhibition were also encouraged to make their own buttons from materials provided on-site.

We were fortunate to get funding for this project from the Community One Foundation, the Michael Lynch History Grant (through the Mark S. Bonham Centre for Sexual Diversity Studies, University of Toronto), and Xtra!

If you are at all interested in the Archives, please visit our website, contact us (queries@clga.ca or 416-777-2755) to come in for a tour, and perhaps also do some research.

Donald W. McLeod works as a librarian at the Robarts Library, University of Toronto, and is a long-time volunteer at the Canadian Lesbian and Gay Archives.  This text is a modified version of a talk he gave on November 1, 2012, at “Public History and the University: A Workshop” held at York University. The workshop was sponsored by The Public History Project of the Department of History at York University and The Avie Bennett Historica-Dominion Institute Chair in History.

One thought on “The Canadian Lesbian and Gay Archives, Research, and the Public”