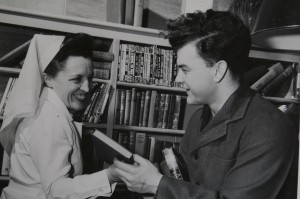 By Khayla Buhler and Phil Gold

Next year we begin to commemorate the 100th anniversary of the beginning of World War I.  At the same time we can also celebrate the centennial anniversary of services provided by the Toronto Public Library to Canada’s military veterans.  In 1914, the Toronto Public Library’s (TPL) Board of Trustees established a system of services provided by staff from the High Park Branch to support the needs of military personnel at the Canadian National Exhibition training camp.   With the end of World War One, TPL extended services from the CNE to the Toronto Military Orthopaedic Hospital, affectionately called The Christie Street Hospital.

During the early 1940s, the Department of Veterans Affairs began to realize the inadequacy of the Christie Street hospital, as it was unable to serve the needs of both the aging veterans of the First World War and those who were now returning from the battlefields of the Second World War.  Alice Kilgour had donated the Sunnybrook Estate to the City of Toronto in 1928 for use as a public park in memory of her husband Major Joseph Kilgour.   With the consent of the Kilgour family, in 1943 the City of Toronto transferred Sunnybrook Park to the Government of Canada for the purpose of building a hospital dedicated to the care of Canadian veterans.

On November 11, 1943 sod was turned and construction of Sunnybrook Hospital was completed in stages by the architectural firm of Allward and Gouinlock.  The pedigrees of Hugh Allward and George H. Gouinlock closely connect them to the City of Toronto and to Canada’s military.  Hugh Allward was the son of the great Canadian sculptor Walter Allward, who had built the Vimy Ridge Monument and many of the cenotaphs in Ontario.  George H. Gouinlock was the son of George W. Gouinlock, the architect of the Canadian National Exhibition and Toronto’s first skyscraper, the Temple Building.

Patients and staff began to transfer to Canada’s largest military hospital, Sunnybrook, from the Christie Street Hospital in 1946.  This transfer of veterans between hospitals included the establishment of a limited form of library service offered once a week and provided by librarians from the Mount Pleasant Branch.

Sunnybrook Hospital symbolizes the sacrifices made by those members of the armed forces whom this hospital aims to serve and seeks to honour … My earnest hope is that it may equally express our resolve to share in the building of a better world in which the need for veterans’ hospitals will no longer arise.

By September 1948, the TPL established a permanent library branch at Sunnybrook with a contract lasting 25 years. As promised, the Sunnybrook branch was staffed by librarians who provided patients and staff alike with access to the resources of an extensive library system.  As is still the case today, any circulating item found in the TPL catalogue can be requested and delivered to the Sunnybrook branch. 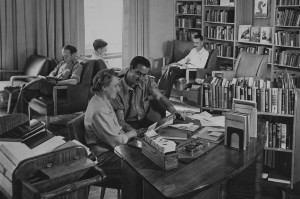 Unique among public libraries, the Sunnybrook branch received its funding from the Gyro Club of Toronto. The Gyros donated a $500 yearly book allowance to the Sunnybrook branch of the TPL for 20 years and funds for the salaries of the Head Librarian Lillias Alexander and Wesla Christopherson, the Associate Librarian.

The Sunnybrook branch quickly became an integral part of the hospital. Sunnybrook News, a monthly patient-driven magazine published by the hospital, sought book reviews written by hospital patients and published lists of new books in the magazine’s Library News section. The book wagon travelling library service transferred to Sunnybrook with the patients who came from Christie Street. It carried the most popular books, now provided by the library and circulated daily, reaching each bedridden patient once a week.

The Sunnybrook branch has become an essential non-medical service of the hospital. The celebration of the branch’s first birthday in 1949 solidified its prominence.  During the next 18 years the library grew and changed in response to the hospital’s own growth and change.

Since the branch was located at the border between the City of Toronto and North York, an opportunity developed for the North York Public Library to assume the administrative and staffing responsibilities at Sunnybrook.  This relationship was formalized on June 12, 1967 and continued until municipal amalgamation in 1998, when administration of the branch returned to the TPL.

After more than six decades of service to members of the greatest generation of Canadians, the Sunnybrook Branch continues to enjoy its status as the smallest branch in the Toronto Public Library system.  And it continues to support the Sunnybrook community of hospital patients, veterans and staff.  To those who are served by the branch, it a well-hidden gem.

Libraries in the post war period:  being the Report of the Chief Librarian to the Toronto Public Library Board, January 1944.  Charles R. Sanderson.  Toronto, 1944.