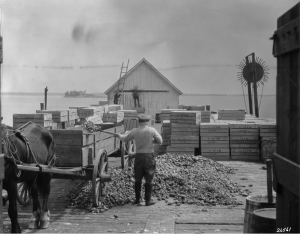 “Cape Breton Lobster Fishers on Strike” ran the headline.  On 8 May the lobster fishermen of Gabarus, Cape Breton struck demanding a price of  $3.25 per hundred lobsters instead of the $2.35 offered by the buyers.  The processors said there were too many lobsters being caught and they were losing money. The Gabarus men were joined by other fishermen at Main-à-Dieu and boats from a number of communities in Antigonish County and the Gulf Shore of Cape Breton.[1]   How similar was this story from 1909 to May 2013, and how little has change over the last hundred years.

Although this spring’s action didn’t spread to two of the richest districts in Southwest Nova Scotia, it was the most widespread “tie up” in the history of the lobster fishery.  It involved some vessels in New Brunswick, over 1,000 boats from the Eastern Shore, around Cape Breton and along the Northumberland Strait in Nova Scotia, and a majority of boats in Prince Edward Island.

The legal lobster season in Atlantic Canada is very short in most districts and lobster is a commodity that does not keep easily.  As a luxury good, markets are vulnerable to general economic conditions and currency exchanges. Environmental degradation has also led to an explosion of lobster landings: as water temperatures change, its oceanic predators disappear, leaving the human ones to harvest the enlarged population.  In 1999, 44,470 tonnes were landed, in 2011, 66,500 tonnes, a 33 percent increase in just over a decade.  Catches in Maine have also exploded. Bad weather means that fishing is not possible every day, but when the season is open, fishermen normally go out as much as possible for exhausting and sometimes dangerous long days, catching as many lobsters they can. Time is short to recover the considerable outlays made in advance for gear, fuel, and bait and to earn enough for the year and prepare for the next.

The way the industry is structured now is the same as it was in 1909: it is divided between market, or live, lobsters (bring a higher price) and canners, or smaller lobsters that depend on processing. To a large extent this division between market and canners is geographic with Prince Edward Island and the Gulf of St Lawrence supplying smaller lobsters and the large live lobster trade associated with the Atlantic coast.  Large modern corporations such as Clearwater now have a hand in both the market and processing trade and are able to divert weak market lobsters that might not survive transportation and avoid the loses that a buyer only selling live lobsters might have to suffer.

There are also historical continuities in complaints about the ways in which prices are set.  In 1909 lobster fishermen spoke of industry “combinations” while in 2013 they used the word “collusion.”  Certainly in 1909 the large canning companies worked together to set the price they would offer fishermen.  Sometimes smaller companies broke and offered higher prices but they soon faced retribution from the larger companies who often sold necessary canning supplies.

The challenges to doing something about the structure of the industry have also remained the same over the century. While processors organized, it was often much more difficult to organize fishermen.  At the turn of the century, lobster fishermen formed the Fishermen’s Union of Nova Scotia. After establishing locals in Maine, the American Federation of Labor attempted organizing in the Maritimes. Stable organizations would have to wait until the P.E.I. Fishermen’s Association in the 1950s and the Maritime Fisherman’s Union in the 1970s.

And finally the results of the 1909 and 2013 tie-ups seem to be the same, at least for Prince Edward Island fishermen.  They gave up valuable days on the water for no price increase and the promise of a government inquiry.  In 1909 communities that did not cave quickly experienced brutal results.  The American canning company Burnham & Morrill mothballed its factory for the 1909 season leaving no one to buy Gabarus lobsters. The fishermen in Gabarus responded by establishing a cooperative cannery. In 2013, Cape Breton fishermen stayed off the water for the first week of their season and negotiated a higher guaranteed price of $4.25 a pound.  They had been hoping for $5.00.

Some things have changed in the last hundred years.  Maritime lobster now participates in a global market and since the late 1970s the Canadian state has pursued a policy of “fleet separation” whereby all inshore fishing licenses on the Atlantic coast have been restricted to owner-operated vessels.  This means that corporations do not fish (except by under-the-table arrangements); they buy, process, transport and market.  This status quo has been declared to be “inefficient” by the current federal government and there is a move to permit corporations to hold inshore licenses.  Lobster fishermen, squeezed by low prices and the possibility that processors will not purchase their entire catch, will be tempted to sell out.  The dramatic events of 2013 foreshadow rough water to come.

Suzanne Morton teaches history at McGill and is currently working on a history of lobster regulation in the Maritimes between 1873 and 1970.