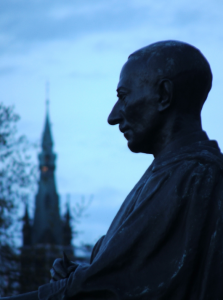 Arthur Doughty, the first Dominion Archivist of Canada, believed that ‘of all national assets archives are the most precious; they are the gift of one generation to another and the extent of our care of them marks the extent of our civilization’

I had the good fortune to facilitate a lively discussion on the role of public historians in the history wars at a ‘dine around’ session during the recent annual conference of the National Council on Public History, held in Ottawa from April 17-20. We had representatives from both Canada and the United States of various ages and experiences across the range of the public history community: students, consultants, archivists, parks interpreters, educators, museum professionals, bureaucrats, and heritage professionals, with some attendees wearing more than one of these “hats.”

“ There’s always politics in history.”: The Predicament of the Public Historian

All history professions, and especially public historians, are deeply entangled with the politics of selection. The archivist disposes, the museum professional curates, the parks worker interprets. The fact that we actively select one document, artefact, or narrative over another lies at the heart of our profession so much so that I’d argue that self-awareness regarding the act of selection is one of the key public history threshold concepts.

Historians are storytellers, weaving together the competing narratives of the past in the form of books, articles and lectures. Public historians are limited in scope by the mandate of their institution and, at times, their administrators and funding sources. Indeed, one participant reminded us of the “golden rule,” that is, money can exert influence over interpretation by funding certain projects or by denying funding for future projects if certain narrative expectations are not met.

The recent emphasis on the War of 1812 and the coming changes at the Canadian Museum of Civilization present two Canadian examples of how funding and mandate affect the ways stories are told. Public historians working within institutions may have to align their work to government or private priorities to secure their often meagre budgets. Presenting critical histories and preserving records from all sections of society are important, but public historians also require funding to keep the doors open.

The challenge facing public historians is to tell stories that are relevant to our times and that resonate with our audiences. We need to draw audiences in and engage them in rich conversations about the past. If funding bodies are focusing on the War of 1812 and, soon, the First World War, can we use these priorities to tell stories that capture the public’s imagination and also critically engage with the dominant narrative? How can we use external priorities to educate our audiences about the subjective nature of the past and direct them to resources that will let them explore it on their own terms and in their own time?

“How much BS can you handle?”: Professional ethics and the obligations of employment

Working in an institution carries numerous expectations that may be antithetical to our ideas of professional ethics and responsibility. This point bluntly made by the conflict of interest section of the new Code of Conduct at Library and Archives Canada. While the Canadians were well aware of this document (and referred positively to Jian Gomeshi’s intervention), the Americans reacted strongly when we described the designation of activities such as of volunteering, teaching and attending conferences as “high risk”. Their reactions included the relevant and unanswered question of “high risk to whom?”

Public historians are above all passionate about their work and often volunteer at local institutions, mentor colleagues, and train the next generation in their free time. Unfortunately, many institutions know this and there seems to be a “race to the bottom” when it comes to wages and benefits. Employers know that public historians love the work they do and there is a steady stream of new graduates looking for jobs. As a result, as one participant put it, “salaries are terrible in this profession.”

When faced with increasingly stringent obligations of employment that limit the kind of passionate professionalism public historians often bring to their jobs, limited by budgets and restrictive mandates, and low pay and increased competition for scarce jobs, an important question we have to ask ourselves is, to put it in the words of another participant: “How much BS can you handle?”

Answering this question requires a balancing of factors. For example, even though funding priorities and mandates are often set at a level above that of the public historian, governments and boards don’t last forever. Further, these are not the same as floor plans, interpretative text, and acquisition and disposition policies. It may be worth sticking it out in a poisoned workplace to lay the groundwork for better days or to try to influence the received narrative from the inside while relying on professional organizations and colleagues to champion your cause from the outside.

“There has to be people who question things.”:  The need for champions

A beloved institution is harder to meddle with than one that is barely on public’s radar. Compare public perceptions of the Library of Congress and National Archives in the United States with LAC in Canada. LAC simply doesn’t have the same outreach program to the general public that the LoC and NA do and even LAC’s outreach to other archival institutions has been severely curtailed.

What is to be done, then? How we can, as public history professionals, academics, and others interested in history advocate on behalf of these important causes in a way that is at once effective and non-partisan? For one, we will have to engage the public in a meaningful way. This might be a job especially well suited for public historians. We are storytellers at heart, and we have a multiplicity of skills and experiences to rely upon. The question, then, is how do we tell our own story to the Canadian public in a way that both is relevant to them and resonates with them?

Note: All quotations came from participants at the dine around session.

Pete Anderson holds an M.A. in Public History from Carleton University. He is currently working as a public historian in Ottawa, ON.