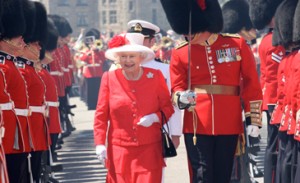 The Queen inspects the Guard of Honour mounted by the Ceremonial Guard on Parliament Hill, July 1, 2010. ***

The Canadian government announced this past week that Canadian forces members will no longer wear the Maple Leaf as a symbol of rank.  The Maple Leaf is to be replaced on the shoulder boards and collar tabs of Canadian soldiers’ uniforms with the crown or pip that had been used to indicate rank in the Canadian Forces before unification in 1968.  Further, the most junior Canadian enlisted personnel will be referred to by new rank designations.  These new rank designations, and the re-introduced pip and crown, mirror rank and rank indicators that are used in the British armed services, and represent a return, in the words of former Defence Minister Peter McKay, “to the insignia that was so much a part of what the Canadian Army accomplished in Canada’s name.”

This new policy comes two years after the three component arms of the Canadian Forces were renamed.  Rather than being Land Command, Maritime Command and Air Command, their names since unification, they became the Canadian Army, the Royal Canadian Navy and the Royal Canadian Air Force, again mirroring the Canadian Forces’ British counterparts.  This change was, in the words of Peter McKay, about fixing a “mistake,” suggesting that somehow a move away from British symbols and names was taking the Canadian Forces away from their true identity.  These changes met with widespread criticism and were characterized by military historian Jack Granatstein as “abject colonialism.”

These are the latest in a series of initiatives within the Canadian Forces, and the Canadian government more broadly, that have sought to align Canada with and remind Canadians of our ties to the United Kingdom and the Monarchy.  These initiatives have included hanging pictures of the Queen in all Canadian embassies and offices overseas, an increase in royal visits, and, just last year, a proposal to share consular resources with the United Kingdom.  They have also been reflected in the themes and narratives used in the commemoration of the Bicentennial of the War of 1812, and will likely be apparent in the upcoming anniversary celebrations of the outbreak of the First World War in 2014 and of Confederation in 2017.

In an article published in the Globe and Mail on Canada Day, Université Laval historian Jocelyn Létourneau suggested that this emphasis on royal symbolism and on promoting Canada’s ties to the Commonwealth and, historically, to the British Empire, has been part of a concerted campaign by the Conservative government to find a replacement for multiculturalism.

In this article, published under the title “Multiculturalism Died, and Harper replaced it with ‘Royalization’”, Létourneau suggests that multiculturalism has been largely unsuccessful in accomplishing one of its primary goals; undermining the power of Québecois nationalism and replacing it with a shared Canadian identity.  As such, Létourneau argues that the current government has seen the writing on the wall and has sought to bolster four distinct Canadian identities that together make up an idea of Canada.  This strategy has involved recognition of Québec’s distinctness, progress in transforming the relationship between First Nations and the federal government, the continuing need to maintain Canadian sovereignty and independence in the face of American hegemony, and, in the case of English Canada, the renewed emphasis on traditional markers of an English Canadian identity.  Létourneau concludes that this is all centred on a shared sense of Canada as an immigrant nation with common values.

Létourneau generally avoids judging the value of this new exercise, simply suggesting that this is the direction in which the current government is moving as it seeks to transform ideas of Canadian identity.  And he seems to be right, though he describes this new direction more eloquently and more explicitly than anyone in government has.

On a very basic level, what do these changes mean for the Canadian military?  Though it is true that Canadian soldiers fought in the First and Second World Wars in close cooperation with, and often under the command of, the British military, the post-war period was characterized by a process in which the Canadian Forces became more closely aligned with the United States’ military, and in which Canadian defence and foreign policy were freed from Imperial and then Commonwealth considerations.  While we may be returning to imagery that means something to an older generation of veterans of the Second World War, what do these colonial symbols mean for generations who have fought and kept the peace under the auspices of NATO and the UN in Afghanistan, in Korea or in the Sinai Peninsula?

This symbolic return also plays into ideas of the First and Second World Wars as nationalist stepping stones that reflect a shared and uncontroversial progression to the Canada we know today.  They ignore all of the conflicts and difficulties that have actually accompanied Canada’s history of war.  This new English Canadian identity seeks to ignore the conflict in Québec over conscription and the internment of Ukrainian-Canadians during the First World, as well as the internment of Japanese Canadians during the Second World War.

What are new Canadians supposed to make of this new emphasis, especially those who have made Canada their home in the decades since the Canadian government started emphasizing our shared multicultural future?  How are generations of Canadians who have embraced an increasingly multicultural and republican idea of Canadian identity supposed to react when the government presents us with an identity that values the colonial trappings many have worked so hard to shed?  Why do we focus on only one aspect of our heritage when Canada has always been the destination for immigrants from many different, non-Commonwealth, countries.  Finally, how do we react to these new changes as historians, and what is our responsibility in the face of this new/old idea of who we are?

Jon Weier is a PhD Candidate in the History Department at Western University.  His thesis is a transnational history of the First World War work of the YMCA.  He regularly posts on twitter as @jonweier.

8 thoughts on “Canada and the New Colonialism”