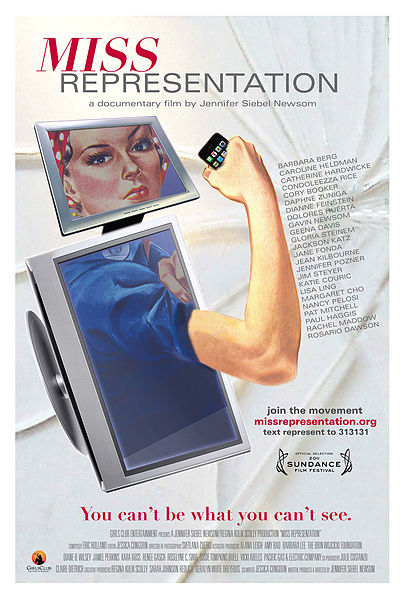 Miss Representation (2011) is a documentary film that challenges the limiting representations of women in American media, exploring how these impact girls’ and women’s sense of self-worth and emotional health, while contributing to the overall devaluation of women in contemporary culture. Building from the premise that the medium is the message, the film is a call for media makers to be more socially responsible by employing positive female role models.

Written, directed and produced by Jennifer Siebel Newsom, the film begins on a very personal level, tracing her childhood through to the birth of her daughter. In asking what kind of future her daughter can look forward to, the film quickly shifts onto highly political terrain. An analysis of portrayals of women in the media, which are all too often belittling, demonizing and objectifying, reinforces the argument that “you can’t be what you can’t see.”

An early scene provides a poignant example of the pervasiveness of a patriarchal, male-dominated culture when high-school student Ariella reflects on the value placed on women’s appearance and body over and above their intelligence. In short: it isn’t what a woman has to say but rather how she looks saying it that matters most in our culture. How this impacts resources devoted to appearance or education is a subject explored more fully.

The film features many accomplished, intelligent and powerful women and allies, from academics to politicians to writers, journalists and television personalities. The point bears emphasis given reviews by some commentators featured on the popular site Rotten Tomatoes – “childish,” “cheapest,” “manipulative” and “ignorant” are among the more negative adjectives used, while one commentator goes so far as to complain the interviews were conducted with people with “no real qualifications.” Apparently for some, the most important “credential” is a penis. This aptly highlights a critical point of the film: masculinity has come to be defined as better than, smarter than, stronger than – this is masculine privilege. Speaking truth to power inevitably leads to a backlash from those who enjoy that power and privilege.

Politics are a major theme of the film, albeit in a non-partisan manner. Condoleezza Rice and Nancy Pelosi reflect on some common barriers they face as women in politics. Hilary Rodham Clinton and Sarah Palin provide for an interesting analysis of how the media treats women politicians who adopt masculine or feminine techniques. Clearly women remain grossly underrepresented at all levels of government. While electing women is no guarantee that they’ll become champions of women’s issues, as some of these women have amply illustrated, having government that actually reflects the people it is supposed to represent remains a worthwhile goal. Women and gender in journalism, television and film also receive extensive attention.

Unfortunately, the film is largely silent on racialization, with the exception of some commentary from racialized interviewees. The fact that the “perfect image” of a woman in American mainstream media is often also white could have received more attention and critical analysis.

There is rarely enough historical context for the historian, and Miss Representation is no exception. A brief clip offers an intriguing view into women in film from the 1920s to the 1940s, hinting at a greater space for complex female roles at this time. The period from the 1950s to the 1980s receives more substantive treatment; snapshots bring viewers from postwar containment through to the women’s liberation movement. The 1980s are positioned as a major breaking point in this upwards trajectory, leading to a regressive period of decline in women’s status and rights that continues today.

I was personally uneasy with the very frequent use of the word “girl” in the film. How many times has a young student referred to himself as a man and me as a girl in the same sentence? But in a society that devalues – and as the film illustrates, even vaporizes – older women, becoming a man can be a much more vaunted pursuit. In a culture where women are valued for their youth and beauty, aging is a pathway to even further societal marginalization. The “girl” label can very much discursively trap women in a perpetual state of childhood.

Some may be uncomfortable with the so-called censorship of featuring more positive women role models in the media. However, in an industry that is overwhelmingly dominated by men, particularly at the writing and directing level, women’s voices are perpetually filtered by men in our mainstream media. It is far past time, as Miss Representation aptly highlights, for women to have equal space to tell their own stories.

Miss Representation is more than a critical analysis of the status of women in American media. It is also a call to action. In this sense, the film and its website are an ongoing project, offering tangible strategies that everyone can use to build a more equitable society. Seeing the film is a great first step in this worthy project.

Christine McLaughlin is a Course Instructor at Trent University in Oshawa and Co-Editor of ActiveHistory.ca.