As the cold weather sets in southern Ontario, I’m reminded of the fun activities I enjoyed during warmer days of months past. This year I had the opportunity to design and lead a handful of historical walking tours of downtown Toronto.

These tours were based on particular themes within or approaches to the city’s history, and they catered to either very specific or quite diverse audiences. One tour examined the environmental history of downtown Toronto for a small group of visiting academics attending the 2013 Annual Meeting of the American Society for Environmental History (I designed the tour in tandem with a chapter of a similar topic that I published in Urban Explorations: Environmental Histories of the Toronto Region (2013), an edited collection created for the conference). Another walk, co-designed by Heritage Toronto’s Gary Miedema and Ryerson University’s Ross Fair, surveyed the general history of the city in ten stops. The tour served as a sort of “Greatest Hits” of Toronto’s history for the immensely popular Doors Open Toronto weekend held every May. The history of different modes of transportation during Toronto’s automobile age formed the theme of another walk, which I led as one of Heritage Toronto’s historical walking tours.

Although I’m a relative newcomer to historical tours, I’ve come to realize that this form of “making history” is quite a valuable way to present key questions and issues of the past to diverse groups of people. What follows are my thoughts on ways to create a successful tour. I hope it is useful for anyone who might consider designing or leading their own walking tour. Please feel free to contribute your own ideas in the comments section!

A theme and a place
Is there a particular historical theme or a unique place that interests you? The list of themes that can be explored in a historical walking tour is endless: architecture and infrastructure, the natural environment, political conflict, gender, sexuality, technology, arts and culture, and many more.

What part of the past are you trying to communicate? For example, are you trying to uncover a part of the past that most people are unfamiliar with? If you are designing a tour for an organization, the theme might already be selected for you. For example, the theme of Doors Open Toronto this past year was “creators, makers, and innovators,” and so we designed our tour with this in mind.

It’s a good idea to select a geographical area that you are familiar with. Not only will you have a basis of knowledge about the area’s past to work with, you’ll also be aware of its physical environment: its sidewalks, buildings, natural amenities, and other features. The logistics of an area also play a strong influence on whether a walking tour is successful. Consider its accessibility: is it hard to get to? Is there washroom access along the route? How long should the tour be? Is it marked by difficult terrain that might dissuade participants (or encourage resilient travellers)?

Do your research
Like any form of “making history,” it is essential to do your research. Secondary sources (reputable books, articles, and other publications) on the area or theme you are exploring is probably the best place to start, since you can draw on the research that has already been done by others. You might also wish to consult primary sources: things like newspapers, correspondences, photographs, and other preserved remnants of the past. Historic maps – especially survey maps and fire insurance maps – are another excellent primary source for walking tours, since they suggest how the physical landscape has changed over time. For example, you’ll learn the approximate year that a popular building was erected or an important street laid.

Exploring the area yourself is a key part of the research process. Keep your eyes open! As you think about your tour, you should ask yourself questions rooted in historical thinking: what elements of the landscape has changed? What has stayed the same? And what explains both continuity and change?  Bring a pen and paper with you, so you can record your thoughts. Further research should hopefully answer these questions.

A moving narrative
Most methods of “making history” – a book, a film, a lecture – often allow its creator a fair amount of freedom in terms of how they choose to structure the narrative. The general story might be arranged chronologically, thematically, or some other fashion.

A walking tour different. Its narrative is tied to the route. This is often where the fun and creativity comes in. Sure, logistics play a large part in route design: where to begin, the paths to take, the duration of the tour, and where to end, etc. But I’ve found the challenge of linking the narratives of walking tours with their routes to be one of the most enjoyable parts of the whole process of designing a tour.

The first stop is a suitable time to provide an overview of the tour’s themes and its main arguments (as well as introducing yourself and other practical matters), while the final stop can be used to summarize the tour. And all the stops in between help illustrate and push forward the themes and arguments. In this sense, the structure is somewhat similar to a typical historical essay: introduction, body, conclusion. Yet the order that examples are presented is inevitably constricted to the geographic reality of the walking tour’s area. This isn’t a detriment, it’s an opportunity.

Not all historical tours need be based on walking. This year, Heritage Toronto began offering bus tours and even a cycling tour! 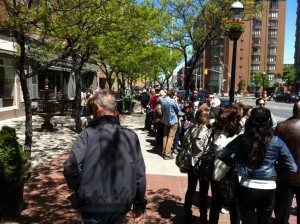 Hundreds of people lined up to participate in “Creating Toronto: The Story of the City in Ten Stops,” a Doors Open walking tour that took place six times over two days.

Knowledge dissemination, audiences, and the role of stories
Historical tours are a great way to disseminate historical knowledge to a diverse array of audiences. They create interest and excitement by moving from stop to stop through a physical area, uncovering the fascinating pasts of a place that a participant might have lived in their whole life, might have never have seen, or anything in between. Since information is communicated orally and visually, historical tours can interest people who typically don’t engage with historical knowledge via the written form. When designing the content of your, keep the audience in mind. Is the tour intended for experts? The general public? Families with small children?

No matter the audience, interesting stories – whether examples of the dramatic or the everyday – play a key role in historical tours. Stories help pique the interest of participants and often makes the past seem more relatable.

Community engagement
I’ve found that historical tours are a two-way street. They have allowed me an opportunity to present my historical knowledge in a unique form. Yet I’ve also learnt much from participants on my tours. During my transportation history walk, I enjoyed a chat with both a retired professional engineer who came at the topic from a different disciplinary perspective as well as a resident whose late spouse had been involved in highway planning in Ontario during the 1960s and 1970s. I hope they learnt as much from me as I did from them! So leave time for questions and stories from participants – you might learn something to add to your tour the next time you lead it.

The role of technology
Social media and mobile technology can play a useful part in historical tours. In particular, participants (either before or after the tour, or during the tour if they have mobile devices) might be directed to a simple website related to the tour, where they can compare historical images with the current landscape at specific stops. For the ASEH tour I used this technique via a WordPress website, which participants found useful to compare the past with the present.

A final thought: the history of historical tours?
Historians have done excellent work over the past few decades on the contested roots of monuments, historical reenactments and festivals, as well as other forms of public memory. These activities are part of what historian Alan Gordon terms “public pasts.” But it strikes me that little is known of the history of historical walking tours as a form of creating and presenting public memory. Especially since the popularity of these tours shows no sign of waning, a study of the origins and evolution of organized historical walking tours is waiting for its historian!

3 thoughts on “Stepping into the Past with Historical Walking Tours”