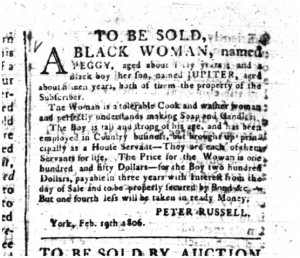 African slavery existed in the colonies of New France and British North America for over 200 years, yet there remains a profound silence in classrooms and teaching resources about Canada’s involvement in the African slave trade. According to available historical documents, least 4,000 Africans were held in bondage for two centuries in the early colonial settlements of New France (Quebec), New Brunswick, Prince Edward Island, Nova Scotia, and Upper Canada (Ontario). Who were these men, women, and children who were deemed property? What were their personal experiences? Why was slavery legally and socially sanctioned for over 200 years?

Black slaves were used as a source of free labour to meet the demand of developing a new colony. They worked in towns and cities not only as domestic servants, but also as fur traders, miners, fishermen, wharf workers, and sailors. African slaves also worked in skilled jobs as blacksmiths, carpenters, wheelwrights, and coopers. They cleared and farmed land, and toiled in hotels, taverns and other businesses. Their coerced labour brought economic benefits to this country and helped to meet the needs of their local communities. Canada is further connected to the Transatlantic Slave Trade through the trading of products like timber and salted cod with slaveholding Caribbean colonies for slave produced goods such as rum, molasses, tobacco, and sugar.

Enslaved Africans were bought and sold through newspapers and at public auctions. Slaves were bequeathed in wills, passed down to family members along with furniture and farm animals. They were held by government officials, clergy, merchants, Natives, and United Empire Loyalists. Like their American counterparts, Canadian slaves faced inhumane treatment and were subject to whippings, jail sentences, and hangings at the gallows. To resist their conditions, many slaves fled to the free territories of the northern US in pursuit of their liberty.

Thirty-three years ago, historian James Walker rightfully pointed out in his A History of Blacks in Canada: a Study Guide for Teachers and Students that “[w]e cannot understand early pioneer history unless we acknowledge that slavery existed”. For the first time, the topic of enslavement has been included in the 2013 revised Ontario Social Studies, History, and Geography curriculum.

As part of a unique workshop series on strategies for teaching Black history in elementary and secondary grades, I will be offering an engaging workshop aimed to help educators incorporate the history of African enslavement in Canada into their history program. Participants will learn how to include the experiences of enslaved African men, women, and children into the curriculum in a meaningful way through the use of primary and secondary sources, as well as narratives. This workshop will also provide strategies for teaching this subject matter effectively and sensitively.

Why Teach about Canadian Slavery?

Incorporating African slavery in Canada provides a more complete historical narrative of the African Canadian pioneer perspective. It also places Africans here as early settlers who worked to build this nation alongside French and English colonists. Teaching and learning about Canadian slavery deflates the “not in our backyard’ myth that persists, the false notion that Canada did not enslave Africans like our American neighbours. It also sheds light on that fact that Canada was the first British colony to implement legislation to move towards abolition in 1793, which had tremendous implications for Black life and settlement during the 19th century. Equally important, the legacy of slavery through the persistence of racism could be identified and examined, with the aim of furthering social justice.

5 thoughts on “Slavery in Canada? I Never Learned That!”