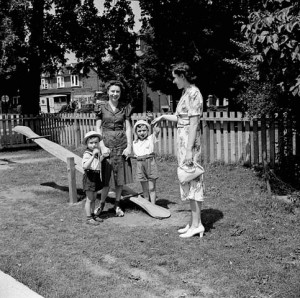 A mother drops off her two children at a day nursery in the 1940s. Library and Archives Canada, MIKAN 3196950.

By Alison Norman and Lisa Pasolli

How much does it cost to raise a child? Should the costs of child care be considered a standard expense for Canadian families? Those questions are on a lot of minds lately, thanks to a storm of controversy around the Fraser Institute’s report The Cost of Raising Children. The report’s author, economics professor Christopher Sarlo, suggests that raising a child costs only $3,000 to $4,500 per year. Parents, policy analysts, and, and labour unions — to name a few — beg to differ. These critics highlight Sarlo’s crucial omission: child care expenses. Sarlo considers this a “discretionary” expense, not one that figures into basic minimums for most families. But families who need child care are hardly an exception; 77% of Canadian mothers with children under 5 are in the labour force. Furthermore, the report obscures the fact that quality, affordable child care spaces are so hard to come by that many parents end up relying on unregulated and sometimes unsafe care.

While it may be tempting to dismiss Sarlo’s calculations and his professed anti-social welfare slant, it’s also worth noting that the report is part of a growing public conversation about child care. British Columbia’s May election highlighted the growing momentum around a $10-a-day plan for universal care, in a province where monthly day care costs can reach $1400. An attention-grabbling New Republic article brought to light “The Hell of American Day Care”, sparking Canadian comparisons. Ontario continues to work out the kinks in its implementation of full-day kindergarten.

This is also a problem that likely strikes close to home for those of us in academia. The lack of day care services was a serious concern at the 2013 Congress in Victoria. Beyond the conference circuit, though, balancing work and family responsibilities is particularly challenging for early career academics. In 2008 Alison Norman conducted a survey of graduate student members of the Canadian Historical Association, and found that the majority of respondents were putting off having children until they finished their degrees — with the expectation that they would find jobs that would provide parental leave benefits and a salary that could cover the costs of child care. The realities of an uncertain and tenuous job market, though, has meant that many academic parents, mothers especially, have scrambled to find enough work to qualify for EI and to be able to afford day care.

Of course, none of this recent attention to child care is new. Calls for reform have been on the national agenda since at least 1970, when the Royal Commission on the Status of Women insisted on the need for a national day care program. Since then, the number of working mothers has risen, and advocates have consistently applied pressure on federal and provincial governments to improve child care, arguing that it is crucial for gender equity, good for children, and key to a healthy economy. (Quebec’s subsidized day care, introduced in 1997, deserves its own blog post, especially given Pauline Marois’s key role in engineering day care policy in the 1990s and her current role in shaping Quebec “values”).

Despite this historical trajectory, we’re still grappling with the question of whether child care is a “special” family expense. Those, like Sarlo, who insist that it is, buy into the deeply-entrenched notion of a “normal” family, one in which the mother stays home to look after her children. On one hand, the acceptance of traditional gender roles has meant the state is reluctant to take responsibility for what it considers a private matter. On the other hand, this has meant that a working mother signalled some kind of “failure” in the family. Child care was offered as a response to a perceived crisis: single motherhood, poverty, or the like. Family rehabilitation was the goal. 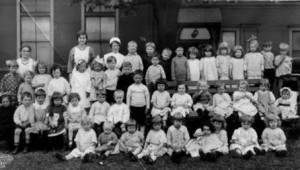 Group portrait of children and supervisors at the Vancouver City Crèche, c. 1917. Photograph by W.J. Moore, courtesy of City of Vancouver Archives, Reference no. Bu P48.

We can see these attitudes embedded in public child care services throughout the 20th century. Take the Vancouver City Crèche, for example, which was absorbed into the municipal relief department in 1912. Public investment in the crèche was justified by its ability to help indigent mothers get back on their feet through employment. Participating in wage work ensured that poor mothers maintained some semblance of independence and work ethic, always the overriding goal of any welfare measure. It helped, too, that the crèche’s employment bureau directed white mothers into low-paid domestic work at a time when Vancouver’s wealthy citizens were gripped with panic about having to hire Chinese men to work in their homes. These patterns were repeated throughout the century, particularly with the introduction of day care subsidies in the 1960s. Public child care support wasn’t something to which all mothers were entitled; rather, subsidies were part of the “war on poverty.” They were targeted to “needy” mothers whose relationship to paid work was subject to regulation.

This history has brought us to a place where child care is still stigmatized as something that only poor families need, or that selfish mothers want. While today working mothers may not be heaped with as much scorn as they were in the 1910s or the 1960s, their access to child care is still shaped by outdated assumptions from those eras. Only time will tell if this recent scrutiny inspires policymakers to take steps towards increasing the quality, accessibility, and affordability of child care. But in the meantime, working mothers, take heart: should you be forced to give up your job because you can’t access or afford day care, you’ll have much more time to spend on knitting, canning, and sewing – those tasks, along with your unpaid caregiving, that Sarlo so helpfully suggests can bring the cost of raising a child down to $3000 per year.