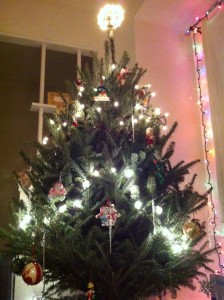 I put up my family’s Christmas tree yesterday. Although some have described me as a bit of a scrooge, the truth is, I really do enjoy many holiday traditions, especially as I get older. And as a historian, I realize that these traditions have a past, both within wider society and within my own life.

Take that very tree that is now festooned with lights, tinsel, and ornaments. The lineage of the Christmas tree dates back to Germany during the fifteenth and sixteenth centuries (with pagan coniferous tree rituals dating back much earlier), before spreading to other areas by the nineteenth century.

Growing up, my family’s tree has long been artificial. Like others, we wanted to avoid the inconvenience of finding a tree outside (and countless pine needles inside).

But this year I decided to purchase a real tree, to celebrate the first holiday season in our new home and with our new child. My parents decided to donate to me this year many of my family’s special ornaments. Delicately examining these heirlooms brought back a flood of special memories. Some ornaments celebrated my own birth and that of my sister, while others commemorated various family milestones. The angel sitting on the tree top (design circa late 1970s) reminded me of my childhood, when I’d wonder what gifts sat at the tree’s base. 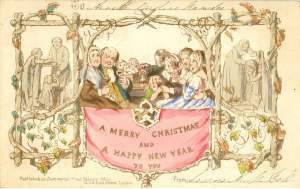 It is no coincidence that the practice of decorating a coniferous tree inside the home spread during the nineteenth century. Like many other holiday traditions that seem to have existed so long as to not have a history, the Christmas tree rose to prominence within the urban British middle class during the Victorian era. The practice spread after Queen Victoria’s German husband, Prince Albert, had erected a Christmas tree for the royal family in the early 1840s. Soon after, the publication of Charles Dickens’ A Christmas Carol (1843) fed off of the growing nostalgic interest in the holiday’s traditions while reinforcing its conception as an event based primarily around family, food, and merriment. This took place within the wider context of a society experiencing rapid change from the twin forces of industrialization and urbanization. That same year, Sir Henry Cole commissioned the first commercial Christmas card, three years after England had established the penny post.

More close to home, historian Steve Penfold has examined the evolution of Eaton’s famous Santa Claus parade in Toronto in an article published in 2011. The parade’s origins date back to 1905 when Santa traveled from Union Station to the Eaton’s store at Queen and Yonge Streets. In subsequent decades, the parade grew in size and sophistication. Since 1982, Toronto has continued to hold a Santa Claus parade, but no longer with an association with Eaton’s.

Penfold sees Eaton’s Santa Claus parade as a “metropolitan spectacle” because it was an intensely local event (originating in Toronto but later held in other locations across Canada) that “not only synthesized international ideas and fit into larger networks of cultural producers, but also had broader reach, projecting power and influence outward from a cultural centre to a vast economic and cultural space.”

Penfold situates the Toronto case within a wider context of big city parades in North America emerging in the early twentieth century, often organized by large, downtown department stores. He also emphasizes how the Eaton’s parade imbued the culture of consumer capitalism through the promotion of mass retail products as well by mirroring the expansion of the department store’s own retail empire across Canada. Penfold is currently completing a book that expands on his research for the article.

I neither grew up in Toronto nor attended any Christmas parades when I was young. And I am not old enough to make any Christmas connection with Eaton’s famous catalogues, which ended circulation in 1976. Similar to its Christmas parades, the Eaton’s catalogue expanded the company’s metropolitan reach from the big city to nearby small towns and rural areas. But I do remember the excitement when the holiday catalogue for Sears, an Eaton’s competitor, arrived at my parents’ doorstep. A sure sign that the Christmas season had begun.

No matter one’s faith or background, the holiday season is a time to look back, not only on the year that has almost past, but also personal traditions and how they are linked to wider histories.

Jay Young is a SSHRC Postdoctoral Fellow in the History Department at McMaster University and an editor at ActiveHistory.ca.

One thought on “Christmas Traditions of Past and Present”