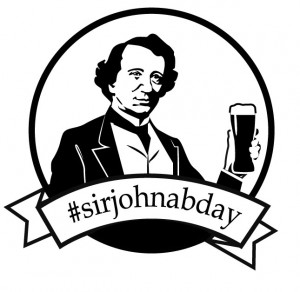 In 2001, the federal government officially declared January 11th to be Sir John A. Macdonald Day, in honour of Canada’s first prime minister and a Father of Confederation. While it’s not an official holiday (shame, we could all use one of those in the cold winter months), it is a “heritage day” along with National Flag of Canada Day (February 15) and the Anniversary of the Statute of Westminster (December 11). Sir John A. Macdonald is seen by many as the man who built this country from east to west, using the railway as the tie that binds. He rightly deserves the attention he has received within the Canadian historical narrative and this will no doubt be paid a mari usque ad mare (from sea to sea) during the bicentennial of his birth in 2015.

Some, myself included, are jumping on the bandwagon a bit early. In Toronto, a period costume event is being held on January 10, and a Canadian history pub trivia night is on at the Duke of York on January 11. I am co-organizing the latter event, and am quite excited to see organizations such as Canada’s History, Historica Canada, and Penguin support the effort to shed some light on our shared and inherited past. Although Sir John A. Macdonald’s birthday has been an official day in Canada for 12 years, there seems to be not much done about it – or, really, any other important days in Canada’s history. The pub trivia night will be a chance to do what Sir John A. loved to do – drink – and to revel in some of the peculiar pieces of Canada’s past.

As a public historian, I have a complicated relationship with commemoration. On the one hand, anniversaries can often distill complex histories into dichotomies and brief moments with little context. On the other hand, if we can’t remember the past on the day in which it happened, when can we?

Moments like Sir John A. Macdonald Day are important to engage in a discussion about what the past looks like today and what Sir John’s legacy is 199 years after his birth – particularly as the modern Canadian national history narrative shifts from one of pluralism and peacekeeping to dichotomies and militarism.

For those who think that Sir John A. Macdonald Day is the commemoration of another dead white man, a historical VIP, I offer you this: The act of commemoration is itself an act of performance, inherently social in itself, and part of remembrance is the external telling and retelling of stories. A hundred years ago, the centenary of Sir John A. Macdonald was likely celebrated with neither a pub trivia night nor the national tour of a musical. Tempora mutantur: Times change, and we change with the times.

One thought on “January 11th is Sir John A. Day”