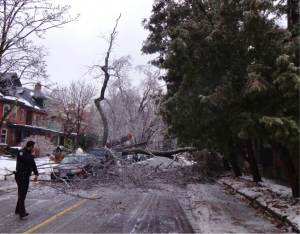 In Toronto, 2013 was a year of storms. The media storm kindled by the mayor’s chicanery was twice interrupted by meteorological storms that threatened lives and property on an unprecedented scale. On July 8th more than 100 mm of rain inundated the city in a matter of hours, triggering flash floods that caused more than $1 billion in property damage. Three days before Christmas, winter storm Gemini unleashed more freezing rain than was ever recorded in Toronto. Some 300,000 customers – representing perhaps one million people – lost power as temperatures plummeted below -10° C. This time the city’s infrastructure succumbed to the force of frozen water, and those desperate for heat too often turned to candles, generators, and other sources of deadly carbon monoxide. I am climate historian living in Toronto. Experiencing these storms helped me better understand how climate change, weather and society influence each other in the past, present, and future.

Climate historians or “historical climatologists” reconstruct past weather and climate using some combination of computer simulations, evidence from the natural world, and documentary sources. The field is interdisciplinary, and many of its scientists stop at these climate reconstructions. However, most of its historians also explore relationships between climate change, weather, and human history. As I have described in previous Active History articles, I am one of those historians. My research explores the social influence of the “Little Ice Age,” a roughly 1° C cooling of global temperatures between the thirteenth and nineteenth centuries. I hope that such research will give us insight into relationships between climate change and society in a warmer future.

Climate historians and climatologists both wrestle with the complexity of linking weather to climate change. Many days of supercomputer calculations are necessary to trace all the distinct environmental connections that link atmospheric trends to atmospheric events. What we know for sure, however, is that some events grow more common in different climates. In the North Sea region, severe gales were more frequent during the coldest phases of the Little Ice Age. Similarly, storms like those that afflicted Toronto last year will become more common as our climate warms in the coming century.

I was foolish enough to walk through the city in the immediate aftermath of both disasters. On July 8th I embarked on an hour-long walk just after writing a dissertation chapter that investigated heavy rainfall in the seventeenth century. It was time to experience what I studied. As I started my expedition the rain had diminished, yet flooding continued unabated. I waded through bubbling brooks that flowed across what had been concrete hours before. Cars sloshed by, rolling forwards just faster than I could walk, as commuters huddled in subway stations and sirens wailed in the distance.

Far more alarming was the morning of December 23rd. Once again I ventured from my apartment in the final hours of a storm, this time to secure food, warmth, and electricity. A final drizzle of freezing rain added to a ubiquitous layer of ice that already seemed at least two centimeters thick. Above me, trees groaned and creaked under the weight, and power line after power line lay draped across the sidewalk. Suddenly, a colossal crash: I turned to see that a huge tree had fallen nearby. A policeman at another collapsed tree rushed to respond, and I awkwardly staggered in pursuit across the ice. When I approached I saw that a van and a jeep had been torn apart. The rest of my walk was much more cautious (see the picture above).

For me, both strolls through my storm-altered urban backyard highlighted the complex psychological effects of severe weather. While walking outside during the ice storm was truly dangerous, neither disaster could, of course, compare to the impact of hurricane Sandy in New York, let alone the devastation of typhoon Hainan in the Philippines. Nevertheless, I could, at least, begin to imagine the shock that must accompany the first glimpse of a familiar landscape violently transformed by weather.

If a flood and an ice storm could render me speechless in twenty-first century Toronto, how did more extreme storms in the distant past affect the psychology of those who perceived in them the anger of a displeased god or malevolent spirit? Certainly despair and fear are clearly reflected in, for example, documents written in the immediate aftermath of North Sea gales during the Little Ice Age. Still, environmental historians of past climates have not yet fully interrogated the psychological impact of severe weather that grew more common in different climatic regimes. In part because it stretches the limits of our sources: largely absent from documents that refer to weather during the Little Ice Age are reflections on lingering feelings of displacement, disillusion and loss, but these emotions surely altered the lives of those who survived contemporary storms.

Climate historians often investigate relationships between past climate change, prevailing weather patterns, and agricultural production. However, the storms of last year also reminded me that networks that support transportation, the distribution of energy, and the flow of information are equally affected by severe weather. The consequences of such infrastructural disruption can be immense. In Toronto, thousands of people were left without power for more than a week, and some were poisoned by carbon monoxide as they struggled to heat their homes. Of course, infrastructural destruction is vastly greater in scale and consequence in the wake of hurricanes and typhoons. In the aftermath of Hainan, for example, the first priority of national and regional governments was to re-establish transportation networks so medicine, food and vital knowledge could be delivered to those in need. 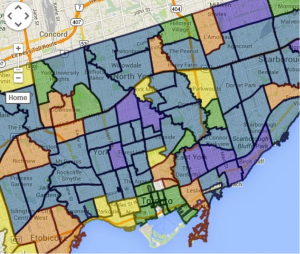 Toronto Hydro map of those without power, December 23rd, 2014. Thousands are powerless in purple and blue districts.

Transportation systems during the Little Ice Age were far less effective than those we have today. For example, the Dutch Republic was renowned for its remarkably efficient and extensive waterborne transportation infrastructure. Still, for a modern traveller barges and boats moved at no more than a snail’s pace through the Republic’s network of canals. Travel on land through the bewildering web of unpaved roads and paths would be even more daunting. Not surprisingly, severe storms or especially cold winters could wreak havoc on mobility through the Dutch Republic.

On the other hand, the Dutch also had a remarkable capacity to adapt. When canals froze, they took to the ice in skates. When storm surges and river flooding inundated fields and towns, they used their boats. When some roads were closed by rain, others often connected the same destinations along slightly different routes. The landscape of the Dutch coastal provinces was largely artificial, reclaimed from the sea by a precarious network of dikes and sluices that required constant maintenance. Hence the Dutch, like most early moderns, were intimately connected to the ways in which they changed, and were changed by, their environments. When their environment provided the unexpected – a severe storm, for example – they were prepared to respond, even if those responses were not always effective.

In the winter of 1619/20, travel by boat was impossible. Instead, the Dutch used skates and horse-drawn or even sail-propelled sleds. Hendrick Avercamp, Winter Scene, 1620.

Perhaps it is unfair to compare the impact of storms in early modern Dutch cities to recent disasters like hurricane Katrina in New Orleans. Certainly the Dutch experienced their share of environmental catastrophe in their seventeenth-century Golden Age. Still, it is worth thinking about climate change in a broad context, with an eye to the past, present and future. Centuries of experience tell us that resilience to weather extremes is a matter of mental and material preparation. Systems must have many levels of redundancy, infrastructure must be flexible, worst-case scenarios must be anticipated before they happen. Whether expressed as exposed power lines or vulnerable levees, aged and precarious infrastructure is a recipe for disaster.

Hopefully 2014 is politically and environmentally tranquil in Toronto. Still, it helps to be prepared. For historians, that means knowing that we can – and should – contribute to conversations about the most important issues of our time.

Dagomar Degroot is a PhD candidate at York University. In 2010 he co-founded the Climate History Network and created HistoricalClimatology.com.

One thought on “Reconstructing the Future: Understanding Toronto’s Wild Weather of 2013”