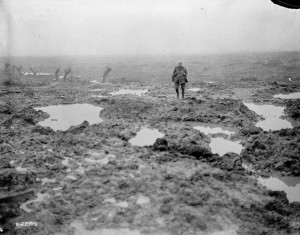 “Mud and barbed wire through which the Canadians advanced during the Battle of Passchendaele,” November 1917. William Rider-Rider / Canada. Dept. of National Defence / Library and Archives Canada / PA-002165

On 20 January 1919 Charles Campbell killed himself. The resident of Brockville, Ontario was the first of many veterans of the First World War to commit suicide that year. Others included Ross Puttilo, Alexander Fowler, William Bailey, and William Dowier. There would be more. Their deaths remind us that recent suicides in the Canadian military are part of a longer historical trajectory of soldier suicide.

With few exceptions, Canadian historians ignore the question of soldier suicide.[1] The military has done a better job of studying the issue and now recognizes that solder suicide is a serious concern. In 2012, the Department of National Defence released Suicide in the Canadian Force, 1995-2012, only the second such report in the military’s history. It found no significant increase in suicide rates between the mid 1990s and the end of Canada’s mission in Afghanistan.  In fact, the report concluded that suicide rates in the military were lower than the civilian population.

This should be no surprise. Recruits, after all, are screened before they join the forces. That there was no statistically significant increase in suicide, despite perceptions to the contrary, is more surprising. This finding is supported by new research on suicide more generally and recent studies have found that old ideas about rising suicide rates, particularly in modern urban environments, are simply not born out by the evidence.

What we lack is a historical picture to put these deaths in context. Not a single study exists on Canadian suicide in the First World War. The same is true of the Second World War, Korea, and our many peacekeeping missions. Veterans of each conflict have been similarly overlooked. Even the statistics we do have are incomplete. Charles Campbell’s death certificate makes no mention of suicide, for instance. The cause of death is listed simply as “gun shot wound.”

Campbell’s case also highlights a major difference between the reporting of soldier suicide today versus the years following the First World War. Of the men and women who have recently taken their lives, the majority were serving members of the military. Campbell, however, killed himself after demobilization. Were he a veteran of Afghanistan, his case would not be recorded. The same is true if he were a reservist.

Despite the difficulties in making sense of the sources, my doctoral research on the impact of the First World War on Canadian men has not been able to escape the question of soldier suicide. Much like today’s media, Canadian veteran suicides were very much in the news in the years after the war. The resulting coverage of these veterans’ deaths provides one window onto the struggles returned men faced after the war.

The conclusions are striking. In 1919, nearly 40% of reported suicides involved veterans. Moreover, if only the suicides of men aged 18-39 (those most likely to serve) are considered, then the percentage of reported veteran suicides doubles to nearly 80%. Clearly the suicides being reported in the press were disproportionately soldier suicides. 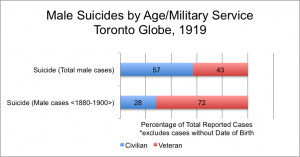 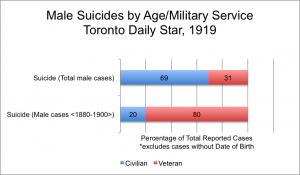 It is important to remember that these are not national statistics and they do not necessarily mean that veterans comprised 80% of all male suicides in Canada. Still, the figures do reflect the experiences of other British Dominions. John Weaver’s research on New Zealand, for example, has shown that the suicide rate for returned men ranged from two to four times as high as civilian men in the same age cohort.[2] Similar rates in Queensland, Australia suggest that the reported cases in Canada are in line with a wider phenomenon that followed 1914-18.

Media reports of why these men turned to suicide can also shed light on how Canadian society responded to the war and its aftermath. Charles Campbell, who was introduced at the outset of this piece, was 23 years old when he ended his life. He returned from overseas in late 1918 and shot himself in January the following year. His leg had been badly shattered by shellfire and, the Globe concluded, he was “evidently morose as the prospect of extended treatment.”[3]

By war’s end some continued to view shell-shocked men as suffering from trauma to the nervous system, but, as the reporting on Private George Smith’s suicide in Winnipeg attests, newspapers also attributed suicide to mental health issues. In Smith’s case, depression caused by shell-shock led to his suicide.[4]

Economic difficulties also caused suicide. William Dowler, formerly a Captain in the Canadian Medical Corps, committed suicide in November 1919 after finding himself in “straitened circumstances.” According to the Star, his pride was such that he had refused monetary assistance.[5]

In the reporting of these deaths, the men in question are often described as “despondent” or having suffered from shell-shock. Their motives differ in each case: some were wounded, others were not; employment prospects were equally varied, as were their records of service. But one thing is clear: their suicides are invariably attributed to the war. Moreover, in the case of the Globe and the Star, the reports show no sign of shock, shame, or surprise at this conclusion. Indeed, in almost every case the war is widely accepted and unchallenged as the cause of their suicide.

Historians argue that the First World War helped normalize disability and mental illness. Men who had given an eye, an arm, or a leg were (ideally) supposed to be recognized as whole, if not physically, then certainly morally. The same was true of psychological health. Though it took time, the stigma of mental health issues began to chip away with recognition that shell shock—to use the period catch-all for war-related mental illness—was real.

Newspapers could have downplayed the war’s role in their deaths. For instance, they could have framed the suicides solely along economic lines. They could even have disparaged the men for committing suicide—but that did not happen. And that is significant. It points to wide social acceptance in Canada that the war had damaged these men. Society accepted their struggles and their suicides were an unfortunate, but unsurprising, example of the war’s impact on Canadian men.

Footnotes
1. One of the only historical examinations of soldier suicide is Yves Tremblay’s overview in the fall 2010 issue of the Bulletin d’histoire politique, “Du suicide, militaire et bibliographique,” pp. 115-127. See too Tremblay’s response to Alison Howell’s November 2011 Literary Review of Canada article “Afghanistan’s Pride” on the contemporary debate about soldier suicide and veterans of Afghanistan, “Back From War: What Do We Know about the Mental Health of Returning Soldiers?,” Literary Review of Canada (Jan-Feb 2012).

Jonathan Scotland is a doctoral candidate at Western University. His dissertation examines the generational impact of the Great War on Canadian men.

5 thoughts on “Soldier Suicide after the Great War: A First Look”