With optimistic thoughts of warm summer days soon approaching, I recently decided to tackle the backyard. We moved into a home in Toronto last year and we had anticipated some outdoor projects ahead.  This included the widening of a backyard walkway and the erection of a few vegetable planter beds there too. Much of the hard work is now complete, and we look forward to spending some time enjoying the fruits of our labour. Looking back, I’ve come to realize that my recent tasks have a direct relationship with the past. 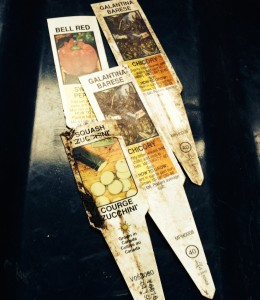 Even before starting my backyard project, I’ve felt the meaning of the past within my home. An hour of research at the City of Toronto Archives revealed that the janitor of the nearby elementary school lived here during the 1930s and 1940s. A bit more time in the archives would probably show more inhabitants and their backgrounds.

For the past few decades, our house had been home to a family who had migrated from Italy in the early 1970s. They left their own touches on the building by constructing the cantina in the basement, incorporating architectural details, and caring for a deep backyard garden.

My wife and I hoped to keep the tradition of the backyard garden alive. Soon after we moved in, neighbours told us that the family’s mother had worked hard to maintain a productive vegetable garden for many decades. One neighbour remembered her coming into the street and announcing the “insalata” she had to share with anyone interested. Another reflected that the garden was her pride and joy, her passion even late in life. I heard of harvests of tomatoes and many varieties of lettuce. When raking the leaves and weeds that had followed last summer’s fallow, I found a handful of garden markers. This confirmed neighbourly observations, but also revealed other crops: red peppers and zucchini.

I began to see my backyard as a kind of archive made of human actions and the environment around me.

With the winter frost melting away, I put on my boots and began to work.

Surprisingly, I found digging a soothing thing. Maybe this is because it seemed like good exercise and so different than my daily routine, which is usually spent typing in front of a computer screen. It helped that I knew the excavation wasn’t something I’d be doing for more than a week or so.

As I continued to dig, I began to see various layers. The strata revealed different moments in time. I can only make an educated guess how the layers got there. First, a level of topsoil, which I assume was deposited by the property’s previous gardener over many years of tending the plot. It’s dark and teeming with life – I’m lucky to start my adventures in gardening with such a great base. Next, a thin yellow layer of what looks like clay. Just a bit deeper revealed a surprise: an assortment of broken bricks and charcoal. My guess? Such detritus served as fill in order to level the backyard’s grade before the street was developed in the 1920s.

When I was a child, I would dig in my parents’ backyard with the hopes of finding buried treasure. Even better if put there by a pirate. Although I found no riches these past few weeks, my greatest moment of excitement came when I saw in the ground a brick with a terra cotta hue. Miraculously, it hadn’t broken like the others.

Again, the past came alive. 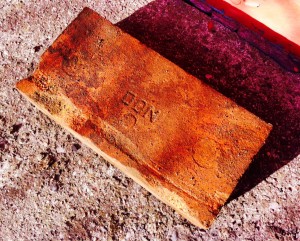 For a century, Toronto was home to the Don Valley Brick Works. The site supplied bricks to the Ontario Legislature, Massey Hall, and other iconic buildings across the city, as well as countless residential structures. Today, Torontonians know it as the Evergreen Brick Works, an environmental and cultural centre that features one of the best farmer’s markets in the city. People love to explore the cavernous pit that provided much of the clay used to make the bricks. In a city built on an ancient lake and buried rivers, digging made me wonder how many thousands, maybe millions of bricks are underground – separated between us only by a layer of soil.

I’m not expecting much of a harvest this year. Between the squirrels and the raccoons, I’ll be happy with a basket of tomatoes and a few meals worth of salad. If I feel any more connections with the larger pasts of my home, then I’ll consider all the hard work well worth it.