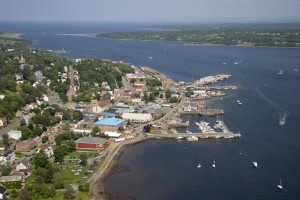 In recent months, concerns surrounding pollution at the Northern Pulp mill in Abercrombie, Nova Scotia have prompted extensive local debate and filled the pages of provincial newspapers with columns and op-ed pieces. Controversy erupted in June, after Northern Pulp announced that the mill was shutting down operations to deal with a wastewater leak. Pictou Landing First Nation chief Andrea Paul and the band council immediately announced a blockade of the site’s access road; for Paul, the effluent leak was only the latest issue in a series of disputes relating to the disposal of waste in the area of Boat Harbour adjacent to First Nations lands. She told a gathering of protesters at the blockade, “In 1991, ’95, ’97 and 2008 we were promised they would clean up Boat Harbour . . . If we back down now, we’ll be in the same situation we were in before.”

Although the blockade ended and the plant was soon reopened after the provincial government agreed to introduce a bill “enacting into law timelines for the cessation of the use of the Boat Harbour Effluent Treatment Facility,” by August another environmental issue had emerged. It was revealed on 1 August that a study completed in October 2013 found that emissions from Northern Pulp “contained nearly twice the particulate matter allowed under provincial regulations.” Within days of the announcement, a protest group comprised of more than 100 people gathered in the nearby town of Pictou to demand a clean up of the mill and outline concerns over public health. Resident Wendy Kearley told a CBC news reporter that she has not been able to leave her home without a respirator in several years. Nova Scotia Minister of Health and Wellness Leo Glavine downplayed the health effects of the particulate matter; “We only have anecdotal information,” he told reporters, “we have nothing really substantial from the scientific community or medical community to indicate that we have a problem that needs to be addressed right at this moment.”

The history of the mill at Abercrombie dates to 1965, when the government of Nova Scotia signed an agreement with Scott Maritimes Pulp Limited to begin production in Pictou County by 1967. During the 1960s, the forestry industry in Nova Scotia was organized around three large firms: Scott Paper in Pictou County (later Northern Pulp), Stora Forest Industries in Cape Breton, and the Bowater Mersey mill in Queen’s County. Concerns over the impact of the forestry industry on the environment in Nova Scotia have been present from the opening of the Scott Paper mill. [1] As early as 1969, community members and residents of the Pictou Landing First Nation had lobbied government for a solution to the Boat Harbour pollution. Despite several promises to the band and other citizens, the provincial government failed to clean up the site through the 1990s and early 2000s.

The issue of pollution at Northern Pulp has exposed an underlying tension between environmental concerns and the economic realities of industrial employment in rural resource communities. The mill directly employs more than 230 workers, with hundreds of other estimated spinoff positions throughout the Atlantic region. Media coverage has framed the story through the lens of “jobs-versus-environment,” wherein environmental concerns are juxtaposed with the importance of maintaining unionized employment and decent wages in Nova Scotia. Such a dichotomy is simplistic; forestry workers have historically been concerned with the state of the environment – as continued employment in that industry relies on some form of environmental conservation. The loss of the mill would be dire for many families within the community, but workers’ reticence to accept the tenets of modern environmentalism has not risen primarily from a jobs-versus-environment dichotomy. Instead, many forestry workers associate environmental activists with other power structures driven by class differentials and geographic disparity. [2]

American pop culture icon and activist Erin Brockovitch got involved with the Northern Pulp issue on 2 September when she commented through social media that “it is virtually impossible to breathe clean air in Pictou,” and that the mill is “destroying the community’s quality of life significantly.” In a stern warning, reminiscent of a 2006 exchange between Paul McCartney and then Newfoundland Premier Danny Williams, Brockovitch noted: “I feel like I’m talking to one of my kids: pick up your mess.” On 27 August, a letter to the editor of the Chronicle Herald newspaper from Jane Sproull Thompson of Trenton called for the provincial government to “wake up and begin planning for something better than dirty, dangerous industrial jobs for (mainly) men with, at best, a high school education.” [3] In a province struggling with economic issues relating to deindustrialization and with a new union contract that outlines major concessions, is it no wonder that Northern Pulp employees express scepticism towards an environmental movement that gives voice to American quasi-celebrities and others who portray industrial workers as childlike, out-dated and uneducated.

In essence, the issues surrounding Northern Pulp and pollution are complex; power has been negotiated through many interested parties since the mill’s opening in the 1960s. The original decision to utilize Boat Harbour as a dumping ground for waste and the broken promises of a clean-up on behalf of the provincial government ignored the agency of the adjacent Pictou Landing First Nation. Workers, too, have fought for a particular strand of environmentalism; as Andrew Hurley argues, the battles for workplace health and safety and sustainable industrial jobs has often prompted workers to push for environmental responsibility up from the factory floor. [4] Middle-class suburban reformers, often concerned with aesthetics, tourism, and property values, use media campaigns, localized protest, and political expression to bring issues of environmental degradation to the fore. In order to negotiate the convergent and competing strands of environmentalism visible in the Northern Pulp pollution debate, we should remember Thomas Dunk’s advice: environmentalists must confront the fact that structural power is also wielded against other marginalized groups, such as industrial workers facing the threat of deindustrialization. In this recognition, we can hope to transcend narrow categories such as worker and environmentalist and achieve a broader-based support for systemic change. [5]

[2] Thomas Dunk, “Talking about the trees: environment and society in forest workers’ culture,” Canadian Review of Sociology/Revue canadienne de sociologie 31, 1 (1994), 14-34. Although the “Clean Pictou Air” activist group has stated that they are not seeking the closure of the mill, the mill has stated that any extended closure resulting from the environmental issue will likely not see the mill re-opened.

[3] The mill’s manager Terri Fraser wrote to the newspaper following the publication of Sproull Thomson’s letter to clarify that 21 per cent of the mill’s employees hold university degrees, 57 per cent are journeymen tradespeople, seven per cent hold a post-secondary diploma, 15 per cent entered the workforce following high school, and none have less than a high school education.

One thought on “The Power-Politics of Pulp and Paper: Health, Environment and Work in Pictou County”