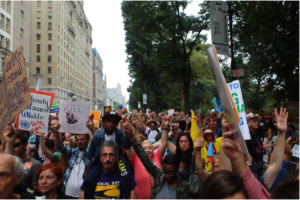 Last month, world leaders met at UN Headquarters in New York City for Climate Summit 2014. As protests raged across the globe, diplomats established the framework for a major climate change agreement next year. The aim will be to limit anthropogenic warming to no more than 2 °C, a threshold established by scientists and policymakers, beyond which climate change is increasingly dangerous and unpredictable.

Just days after the 2014 summit, policy expert David Victor and influential astrophysicist Charles Kennel published an article in Nature that called on governments to “ditch the 2 °C warming goal.” Kennel and Victor argue that the rise in average global temperatures has stalled since 1998, as warming is increasingly absorbed by the world’s oceans. Variations in global temperature therefore do not directly reflect climate change, and governments should adopt other benchmarks for action. Atmospheric concentrations of carbon dioxide, they contend, more accurately reveal the relentless advance of climate change. In any case, limiting the rise in global temperatures to just 2 °C would impose unrealistic costs on national economies.

Not surprisingly, responses to Victor and Kennel have been swift and comprehensive. For example, physicist and oceanographer Stefan Rahmstorf argues that short-term temperature variability does not undermine the case for a 2 °C limit, especially when there is scant evidence for a “pause” in global warming. He explains how scientists and policymakers selected the limit, and cites studies synthesized by the IPCC, which conclude that holding the rise in planetary temperatures to 2 °C would cost no more than 0.06% of the world’s annual GDP. Kevin Anderson, Deputy Director of the Tyndall Centre for Climate Change Research, claims that Victor and Kennel have confused the roles that should be pursued by scientists in international climate change negotiations. Like Rahmstorf, he maintains that the 2 °C limit is neither misplaced nor unachievable. As a climate change advisor to the British government, he explains that, “the UK, almost overnight, conjured up over £350b to bail out the banks and stimulate the economy – but it has earmarked just £3.8b for its Green investment bank!” Physicist Joe Romm argues that a new study, which finds that scientists may have underestimated the extent of global warming, only strengthens the case for a 2 °C limit. To their credit, Victor and Kennel provide a lengthy response in the New York Times to these and other critiques. 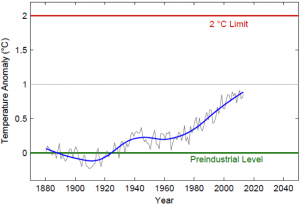 Missing from this debate are perspectives from those who study the past: the ways in which natural climate change has actually influenced human history. This is unfortunate, because historical relationships between climate and society can yield important insights on the usefulness of the 2 °C limit.

Take, for example, the sixteenth and seventeenth centuries, when Europeans entered the Arctic and Subarctic as never before. Journeys of exploration gradually transformed scholarly understandings of the Far North and shaped popular attitudes towards nature and empire. They paved the way for new settlements and laid the groundwork for the exploitation of marine resources that would alter European diets, stimulate the continent’s northern economies, and transform Arctic environments. All this during an early modern “Little Ice Age” that cooled temperatures across the Arctic and Subarctic by at least 0.5 °C, relative to the twentieth-century norm.

This apparent paradox is a focus of my recent research. I have learned that it can be tempting to assume that global cooling or warming will have straightforward impacts at the regional or local level, but such assumptions are often wrong. It often feels as though climate history is the study of bewildering, sometimes infuriating complexity. I frequently find myself using eclectic sources to trace, for example, how changes in solar radiation altered global temperatures, regional cyclonic activity, a series of storms above a town, damage sustained in that town, and how people understood what was going on. This is a part of what makes climate historians so useful to the broader historical discipline: we are always coming up with new ways of understanding how the local reflects the global, of discerning how – and why – things change over time.

Lately, I have used cutting-edge scientific data to reinterpret journals written by Arctic and Subarctic explorers in the sixteenth and seventeenth centuries. I discovered that some expeditions to the Far North benefitted from unusually warm ocean currents and hot summers that actually reflected counter-intuitive links between local environments and the globally cool Little Ice Age.

I have also started to investigate the seventeenth-century rise of the Dutch and English whaling industry around the island of Spitsbergen in the seas north of Norway. It might seem obvious that Arctic whaling expeditions would suffer in colder decades, and indeed the pack ice between Spitsbergen and Greenland would expand as regional temperatures cooled. However, at the same time bowhead whales prized by hunters would congregate near the pack ice, which made them much easier to hunt. The whaling industry therefore enjoyed its best years during the coldest phases of the Little Ice Age.

In other words, my research has revealed that when our focus is strictly on warming or cooling trends, we can lose sight of how climatic shifts actually affect people. 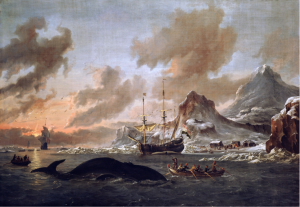 Dutch whalers at Spitsbergen in the seventeenth century. Bowhead whales were actually easier to kill in cold years, when they would congregate near the pack ice. Abraham Storck, “Walvisvangst bij de kust van Spitsbergen,” 1690.

Still, interdisciplinary scholars of past climates trace climate change by reconstructing variations in average temperature. We classify our climatic past according to these swings in average temperature, and how they influenced the advance and retreat of glaciers. Hence our (little) ice ages and warm periods, our minima, maxima, and anomalies. Archeologists, historians, and scientists of many stripes then investigate how humans and animals responded to particularly warm or cold periods. Of course, many continue to dig deeper, considering diverse weather patterns and reaching sometimes-surprising conclusions. Nevertheless, our initial focus on average temperatures usually shapes the kinds of questions we can ask.

Does that mean we miss the mark? Should we stop assuming that climate change and average temperature change are one and the same?

Perhaps not. In reconstructing past climates, scholars of past climates often find that while changes in average temperature do not tell the whole story, they can and should tell us where to start looking. Average temperatures are closely linked to changes in the solar energy earth receives and absorbs, which ultimately drives the environmental changes that reflect climate change. Shifts in regional precipitation, wind dynamics, or ice cover therefore usually respond to shifts in average regional temperature, which are closely correlated to fluctuations in average global temperature.

In that light, the 2 °C limit makes a lot of sense. A focus on average temperature might miss some of the complexity of climate change and its possible ramifications for our future, but changes in temperature are closely linked to the kinds of environmental conditions that Victor and Kennel would rather track separately.

Moreover, nuance is less important in climate change mitigation than it is for climate change adaptation. Greenhouse gas emissions need to decrease because temperatures can only increase so much before they imperil our civilization. The mechanisms and technologies for limiting emissions exist today; now is the time to implement them, rather than adjust our acceptable thresholds.

After all, the human history of past climate change also provides a warning. During the Little Ice Age, a moderate decline in average temperatures profoundly and often disastrously affected societies around the world. What will unprecedented warming do to us?

Dagomar Degroot is a SSHRC postdoctoral fellow at Western University. His research explores flexibility and resilience in the face of climate change across the early modern world. He is the co-founder and co-administrator of the Climate History Network, and the creator of HistoricalClimatology.com.

2 thoughts on “How Should We Measure Climate Change? What the Past Can Tell Us”