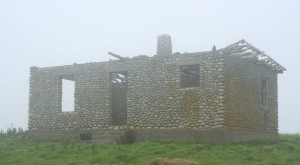 Last year, I was contacted by Phillip Hayward of Southern Cross University to write an article on a “micronation” that had been established on an island off the south shore of Nova Scotia in 1949. Micronations, generally defined as territories declared independent by persons or groups despite the unlikelihood of receiving any official form of recognition, have cropped up around the world since the 1960s. Having been unfamiliar with the concept, I was excited to explore the history of “The Principality of Outer Baldonia.” The process of researching this little-known story of Nova Scotia’s past brought me to southern Nova Scotia to talk about local history, explore the story through material held at two small museums, and learn about the fishing and tourist economy of Wedgeport, Nova Scotia – the closest shore-side community to the now-defunct micronation.

The story of Outer Baldonia begins in the 1930s, when the Acadian fishing community of Wedgeport became home to the then-largest international sports tuna fishing tournament. American businessman and sports writer Michael Lerner organized the first tournament in 1935, after traveling to Nova Scotia to fish tuna and partake in the marketed tourist experience. The tournament grew; American and Canadian elites frequented the area for its reputation for angling. Attendees, in different years, included FDR, Amelia Earhart and Chicago mobster Tony “Big Tuna” Accardo. It was not until the mid-1940s that Russell Arundel, an American businessman and the person responsible for the establishment of Outer Baldonia, arrived in Wedgeport. [1]

In 1948, Arundel purchased “Outer Bald Tusket Island” from local fishermen Élie Cottreau and Ida Doucette for $750. The three-acre island had only been used until that point as the location for a small fishing camp. Arundel’s interest in Outer Bald Tusket Island was the result of its proximity to the tuna fishing shoals; he intended to build a small structure that could be used to escape seasickness or to take a short lunch without traveling back to Wedgeport. In 1953, Arundel related to Esquire Magazine, “Back in Washington, the deed in my pocket and a drink in my hand, the Principality of Outer Baldonia began to take shape.” [2]

Upon returning to Wedgeport the next summer, Arundel hired several local men to build a one-room beachstone structure on the island. This structure was still visible upon my recent visit to the island, although the roof had recently blown off in a storm. With the completion of the structure, Arundel drafted a “Declaration of Independence” for the island and released it to several newspapers. The declaration reads:

Let these facts be submitted to a candid world. That fishermen are a race alone. That fishermen are endowed with the following inalienable rights: The right of freedom from question, nagging, shaving, interruption, women, taxes, politics, was, monologues, cant and inhibitions . . . The right to swear, lie, drink, gamble . . . The right to sleep all day and stay up all night.
. . .
Now, therefore, We bond ourselves in to a new nation, forever independent of all other nations, and do establish on the islands and waters of Outer Bald Island a new government which shall be forever respected and recognized as the Principality of Outer Baldonia

The declaration reveals Arundel’s conception of Outer Baldonia as a nation free of the trappings of everyday life; it was an exclusionary space in which elite notions of masculinity could be performed through interactions with the “unspoilt” environment. In addition to this declaration, Arundel issued more than 20 letters to “acquaintances of calibre” offering the title of “Prince of Outer Baldonia.” He also designed and created a unique currency for the realm, named the “Tunar,” and a coat of arms comprising two tuna fish and the crest of a sheep’s head.

Outer Baldonia first gained international attention in 1950, when the Washington Chesapeake and Potomac Telephone Company listed the Baldonian ‘legation’ number in their phonebook – actually the number of Arundel’s office in the U.S. capital. The Wedgeport Tuna Museum also holds several letters sent to Arundel from private citizens of several countries. These letters primarily seek information on Outer Baldonian passports and citizenship applications. Perhaps the most well-known event in the history of Outer Baldonia occurred in 1952, when a letter to the Literaturnaya Gazeta newspaper in Moscow appeared to take issue with Arundel and the nascent micronation. The author, “L. Chernaya,” criticized Arundel:

Arundel established this ‘dominion’ over the island . . . . [He] has set himself the aim of turning his ‘subjects’ into savages . . . [He] granted his subjects the ‘unrestricted right’ to tell lies, to be rude . . . . In a word, the ‘right’ not to adhere to the ethical and moral laws which have been established by civilized mankind.

Chernaya goes on to argue that the story of Outer Baldonia would be of nearly no consequence if it were not for the fact that Arundel’s actions mirror the imperialist impulse of the American business class and the capitalist mode of production. The hyperbolic language used in Chernaya’s screed against Baldonia could reveal a deeper meaning, perhaps as a satire of traditional Soviet propaganda during the 1950s, but this remains ambiguous.

Following this incident, attention to Outer Baldonia faded in the international press. In 1967, Nancy Coe published a piece in Sports Illustrated magazine describing the “spirit of pure spoof” that the micronation embodied. Although Arundel traveled to the island less often during the late 1950s and early 1960s, Coe was able to interview him for the article. In this interview Arundel describes life on the island and claims that “Vice-President Barkley, under Truman, wanted to be Secretary of the Outer Baldonia Treasury. [Barkley] wanted to handle a treasury with no money, no assets, no debits, just a blank piece of paper and a few speeches” (Coe, 1967: online). While this claim is unverified, it is clear that Arundel continued to add to the legendry surrounding his micronation well into the 1960s.

In the early 1970s, there are no records of Arundel continuing to visit the island. On 28 December 1973, Arundel transferred ownership of Outer Bald Tusket Island to the Nova Scotia Bird Society through the intermediaries of The Nature Conservancy of the United States and The Nature Conservancy of Canada. Although Arundel passed away at the age of 76 in 1978, the story of his micronation continues to illuminate discussion of local history in Wedgeport, Nova Scotia. It also provides an interesting background narrative to the re-emergence of the Wedgeport Tuna Tournament; in 2004, the tournament was revived after a nearly 40-year hiatus.

I would like to thank Lucien Leblanc, operator of the Tusket Island Tours in Wedgeport, for facilitating my travel to Outer Baldonia during the research process. The Yarmouth County Museum and Archives and the Wedgeport Tuna Museum were both excellent resources on local history in Nova Scotia, not only surrounding the story of Outer Baldonia, but of the economic and cultural practices of the region. A fuller exploration of the Nova Scotia micronation can be found in the most recent edition of Shima: The International Journal of Research into Island Cultures.

Lachlan Mackinnon is a PhD Candidate at Concordia University.

[1] Arundel was a well-connected American politico; he worked as a Washington, D.C. lobbyist for Pepsi Co. and owned several Pepsi bottling facilities in Virginia. Rumoured to have connections within the Truman Administration, Arundel was also implicated in a bribery scandal involving a $20,000 cheque to U.S. Senator Joe McCarthy in the 1950s. See “Company Head Denies Loan to McCarthy,” Daytona Morning Journal, 7 May 1953.

[2] Vernon Pizer, “Mirth of a Nation: A three-acre Principality giving the U.S.S.R. the raspberry,” Esquire Magazine (1953).

One thought on “The Principality of Outer Baldonia: A Nova Scotia Micronation”