Ok, first things first: I do not hate John A. Macdonald. At the risk of maddening some colleagues out there, I am wary of trying to contort huge historical events and consequences into how they apply to a single individual’s psychological makeup, political vision or personal ambition. As a self-professed environmental historian, I have even joked with my students that human agency is overrated in history. Still no matter what side of the Macdonald “wedge” you are on, there is no denying his influence. He is, as Richard Gwyn wrote, “The Man Who Made Us.”

Rather than looking at what drove Macdonald’s political ambitions during the Confederation era, I will consider the impact of the decade he spent as both Prime Minister and Superintendent General of Indian affairs from 1878 to 1888. J.R. Miller recently reminded us that he was the longest serving Minister of Indian Affairs in Canadian history, and “For good or ill, Macdonald was an architect of Canadian Indian Policy. The foundation that he and his government laid would last largely unaltered until the middle of the twentieth century.”[1]

Treaties are the legal basis for white settlement in the west. Without the treaties, we could not legally have set up the agrarian society that became “the breadbasket of the world.” In exchange for First Nations people legally opening up the land to our ancestors, the Crown took on legal obligations to recognize their generosity and compensate them for what they had given up. To remind us of this constitutional reciprocal relationship, Briarpatch Magazine recently produced the treaty card for settlers. A good reminder that treaties have meaning for all people living within Canada.

A good example of the treaty-making process comes from the years just before Macdonald returned to power. In 1875, Canadians building a telegraph line without permission to cross Cree territory on the northern plains were asked to stop and leave the region until they got permission to continue their work. First Nations leaders were ambivalent about the arrival of the Canadians and there was a realization that in the long run there was no stopping Canadian incursions. The completion of a treaty seemed the best option.

The following year, the Plains Cree and representatives of the Crown met at Fort Carlton N.W.T. and spent several days negotiating the terms of Treaty 6. At Carlton, one of the Cree negotiators, Chief Beardy, expressed concern about the future of the bison, their staple food and the key to life on the plains. Beardy sought a contingency if the bison disappeared and he stressed the point to Alexander Morris, the Treaty Commissioner and representative of the Crown. After much discussion Morris agreed, using Beardy’s image, “that in a national famine, or general sickness, not what happens in every day life, but if a great blow comes to the Indians, they would not be allowed to die like dogs.”

The commitment was codified in the “Famine and Pestilence” Clause of Treaty Six:

That in the event hereafter of the Indians comprised within this treaty being overtaken by any pestilence, or by a general famine, the Queen, on being satisfied and certified thereof by Her Indian Agent or Agents, will grant to the Indians assistance of such character and to such extent as Her Chief Superintendent of Indian Affairs shall deem necessary and sufficient to relieve the Indians from the calamity that shall have befallen them. (Click here for the full treaty text)

What no one expected was that Canada’s commitment to “relieve the Indians from the calamity” would be required less then two years later.  By the spring of 1878, the year Macdonald returned to power, the bison were gone. The police scrambled to do what they could to meet the humanitarian emergency. 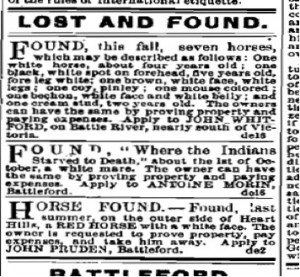 From the Saskatchewan Herald: “Found: ‘Where the Indians Starved to Death’ about the 1st of October, a white mare.”

People were dying. Though for the settler newspaper, the Saskatchewan Herald (right), that wasn’t especially newsworthy.

The humanitarian crisis took on a new character with the re-election of Macdonald on the platform of the National Policy. The promise of a railway to the Pacific was an undertaking that would consume the returning Prime Minister’s administration for the next six years and it would shape Prairie society as we know it. To Macdonald it was truly nation-building: “The Railway, once finished, we become one great united country with a large inter-provincial trade, and a common interest.”[2] In addition to the Herculean task of financing, engineering and actually building the largest mega-project in the country’s history there was another, less tangible, hurdle to overcome. In the words of J.R. Miller, “Without success in dealing with the Indians of the West, settlement could not occur, the railway would not flourish, and the future of a transcontinental Canada would be imperilled.”[3]

Making a long and complicated story very short: in serving as both P.M. and Minister of the Interior, Macdonald personally oversaw the construction of the railway while simultaneously dealing with Canada’s indigenous treaty partners now in such need of help. Within months of his re-election, only the hungry who had signed onto treaty and taken up their appointed reserves were given assistance. A Liberal M.P. called the move “a policy of submission shaped by a policy of starvation.” In the Battleford Agency, Mosquito, Moosomin, Thunderchild, and Little Pine all traded their freedom for food in 1879.

Edgar Dewdney, Macdonald’s right-hand man in the west, saw the famine and wrote, “found about 1,300 Indians … on the verge of starvation” and “strong young men … now so weak that some of them could hardly walk.”[5]

Saskatchewan Herald: “Blackfeet. Over twenty-five had died of actual starvation in the camp at the Blackfoot Crossing.”

In some cases, such as the instance noted in early December 1879 (right) people were literally starving to death.

As Canadian officials took on greater power with so many forced onto reserves, they became even more cruel in the implementation of their treaty commitment. On May 3,1880, Macdonald stated in the House of Commons:

We were obliged to find food for them. In some instances, perhaps, the Indians have been fed when they might not have been in an extreme position of hunger or starvation, and I dare say there have been instances of imposition; but as far as I can learn the officers have exercised due supervision over the food supply. I must say, however, that it was a dangerous thing to commence the system of feeding the Indians. So long as they know they can rely, or believe they can rely, on any source whatever for their food, they make no efforts to support themselves. We have to guard against that, and the only way to guard against it is by being rigid, even stingy, in the distribution of food and require absolute proof of starvation before distributing it. (Debates of the House of Commons, May 3, 1880, p. 1942)

Later, under pressure in the House from the Liberals for spending too much money on relief for Indians, Macdonald replied:

In case of apprehended famine the matter is to be dealt with on the spot; but the whole matter is dealt with by Mr. Dewdney, who has charge of the whole reserves. When the Indians are starving they have been helped, but they have been reduced to one-half and one-quarter rations; but when they fall into a state of destitution we cannot allow them to die for want of food. It is true that Indians so long as they are fed will not work. I have reason to believe that the agents as a whole, and I am sure it is the case with the commissioner, are doing all they can, by refusing food until the Indians are on the verge of starvation to reduce the expense.  (Debates of the House of Commons, April 27, 1882, p.1186)

Chief Big Bear was the last of the holdouts but he too was forced to exchange his freedom for food in December of 1882. The police who had done their best to cope earnestly with the famine, were then asked to dismantle Fort Walsh, the centre of humanitarian aid in the Cypress Hills, and rebuild it at Maple Creek along the line of the CPR.  Thousands of people had food withheld until they left their refuge in the Cypress Hills. 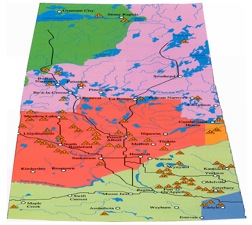 Figure 1 is a map that shows reserves in Saskatchewan. Note there are only two west and south of Regina in the Cypress Hilles; both were only granted reserve status in the 20th century.

Most of those forced to leave the Cypress Hills took up reserves near Battleford, hundreds of kilometres away from the CPR and the land of imminent settlement. Once there, Canadian authorities tolerated no dissent.  On Feb 23,1884, the Herald  reported, “Poundmaker has been a trouble maker ever since his visit to the south last spring and his opposition to the Dept. has been so strong and long-continued that his band has been striken off the ration roll.” A few months later, as  Commissioner Dewdney inspected the area, “a number of Eagle Hills Stonies waiting to see him. They had no business to lay before him but merely “wanted to have a talk.” The “talk” was very short. They were ordered back to their reserve and to have eight days rations stopped for leaving work without the instructor’s permission.”[6]

Within years of negotiating the first seven numbered treaties, First Nations people were suffering from an unprecedented outbreak of tuberculosis, a disease that had been rare before the first treaty was signed in 1871. By 1891, many communities had declined to their demographic nadir. This was only three years after Macdonald relinquished his control over the Department of Indian Affairs. By then, they were confined to their reserves through the notorious “pass system” and a host of other harsh policies, including residential schools, that became institutionalized for decades.

So what does this mean for us, on the eve of “Old Tomorrow”’s bicentennial? Perhaps we should ponder how the prairies were portrayed to the settlers who were enticed to come to the new land: 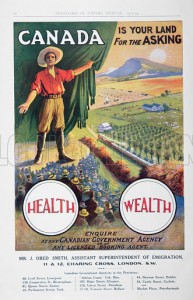 Maybe we were the “Bread Basket of the World.” Just as likely, though, our settler society was founded on a famine – of a complicated making no doubt – managed by Macdonald with his “greater good” in mind.

Though my argument here is somewhat oversimplified and the meaning of the situation was complicated. The famine in western Canada and its aftermath cannot be distilled into a few words, though some have tried:

I don’t see why a German who eats a piece of bread should torment himself with the idea that the soil which produced this bread has been won by the sword. When we eat wheat from Canada, we don’t think about the despoiled Indians. – Adolph Hitler[7]

James Daschuk is an environmental historian and professor in the Faculty of Kinesiology and Health Studies at the University of Regina. His recent book Clearing the Plains: Disease, Politics of Starvation, and the Loss of Aboriginal Life  won the Governor General’s History Award and the Canadian Historical Association’s most important work of non-fiction in 2014. Both awards, ironically, are named after Sir John A. Macdonald.

[2] Macdonald to Sir Stafford Northcote, 1may 1878, quoted in Miller, “Macdonald as Minister of Indian Affairs: The Shaping of Canadian Indian Policy.” 324.

[3] Miller, “Macdonald as Minister of Indian Affairs: The Shaping of Canadian Indian Policy.” 324.