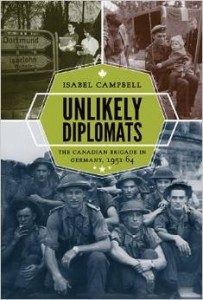 On December 4, 2014, the Canadian War Museum and UBC Press book launch as part of their joint Canadian Military Series. The series features a wide range of military historians and their examinations of this country’s military history. The books launched on this night discussed consumerism on the home front during the Second World War, the evolution of Canada’s Army in the second half of the 20th century, African Canadians serving in the American Civil War, and the Canadian Brigade in Germany.

In the latter, Isabel Campbell examines how the Canadian army and their families served a key diplomatic role while serving in Germany through the 1950s and early 1960s. Living in Ottawa – and being constantly surrounded by diplomats (Hi Norwegian Embassy curling team!) – makes the idea of soldiers and their families as diplomatic tools rather intriguing as it goes against the common conception of diplomats as career civil servants who get dedicated street parking spaces and inexplicable police escorts.

Canada’s German mission is also notable because of its significant domestic legacy. It is not uncommon to meet someone in this country who has spent a portion of their life living in Germany. As a result, the culture and values fostered by the Canadian brigade and their families has been brought back with returning members and has played a role in shaping Canadian life through the second half of the 20th century.

In her book, Campbell explores the brigade in a new and unique way. Capitalizing on newly declassified documents, she examines the diplomatic roles spouses and children played while accompanying soldiers while also re-assessing the notion that Canadian officials were fully united with their NATO allies in Germany.

In this episode of the History Slam, I talk with Isabel Campbell about her book Unlikely Diplomats: The Canadian Brigade in Germany 1951-1964. We chat about the people who were chosen to serve, the strategic benefits of maintaining a presence in Germany, and the day-to-day challenges for the troops. We also discuss the mission in the wider context of the Cold War and the legacy of Canada’s German mission.