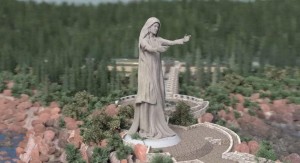 “The bigger-is-better approach to art is best left to Stalinist tyrants, theme-park entrepreneurs and insecure municipalities hoping to waylay bored drive-by tourists…. A brutal megalith doesn’t prompt individual introspection – it mocks it. And by defiling a quiet beauty spot with its grandiose bulk, Mother Canada will only diminish the heritage it claims to honour.”

“It’s great. It’s good. We need it. Maybe we can get the frigging highway fixed.”

In the last few months, the media has been filled with reports and opinions about “Mother Canada,” the twenty-four metre high statue proposed by the Never Forgotten National Memorial Foundation (NFNMF) to commemorate the country’s war dead. Part of the reaction has focused on the site of the statue, at Green Cove, in Cape Breton Highlands National Park, an area whose natural beauty and ecological integrity some feel would be severely compromised by the memorial. To them, Mother Canada is “hubristic, ugly, and just plain wrong.”

Other critics focus on the federal government’s support of this private initiative, seeing it as yet another example of the Harper Conservatives’ re-invention of Canada as a “warrior nation.”

Even the Vimy Foundation, a charitable organization dedicated “to preserve and promote Canada’s First World War legacy” and a group presumably supportive of the whole “warrior nation” thing, is offended. It worries that Canadians will confuse the proposed statue with the “real Mother Canada” at Vimy in France. When he expressed his group’s concerns, Chair Christopher Sweeney learned the NFNMF had trademarked the name for merchandising purposes. “I just find it improper that they would even think of taking it,” he said. “It’s like someone grabbing the title Eiffel Tower, if no one had trademarked it, and building it in Vegas.”

Inevitably, Mother Canada herself has entered the debate, establishing a Twitter account – unverified of course – to further her cause.

Her humorous interventions aside, there are those who are supportive of the NFNMF’s plans, many of them local people like fifty-nine-year-old Glenn Warren, who tends bar at the Legion in Ingonish. “It’s going to bring a lot of people into the area and they’re going to need food, accommodations and gas, and it’s going to be a big boost to the economy around here,” he told reporters. “I think we’d be very foolish to just throw it away.”

Comments like Warren’s are important to the Never Forgotten National Memorial Foundation, establishing the legitimacy of its project by marginalizing critics as privileged outsiders.

But for the barkeep and his neighbours, Mother Canada is just a way to “fix the frigging highway”; it’s about the potential of the memorial to leverage other economic possibilities in the context of limited local options. If businessman Tony Trigiani, the President of the NFNMF, were proposing a monument to pacifists or a fish farm in the park, he likely would have the support of local people who need jobs.

For the rest of us, Mother Canada should be about remembering – not so much how to commemorate the war dead, or what makes a good memorial, or even how history is deployed for particular political purposes. Instead, the debate over the statue in the park gives us a chance to think about region and what our commitment is to it by remembering what it has been.

More than fifty years ago, another Conservative Prime Minister – John Diefenbaker – pledged what at the time were vast sums of public money to his own pet history project, also on Cape Breton; the restoration of Fortress Louisbourg. Dief had already taken an interest in the site when Ivan Rand’s Royal Commission on Coal provided him with the opportunity to frame its restoration as regional development. Concluding that there was little future for the coal industry on the island, Rand argued in 1960 that its economy had to diversify: prosperity would only come by capitalizing on its “natural and historical endowment”; specifically by building a highway and “reconstruct[ing]…the Fortress of Louisbourg.”(1) 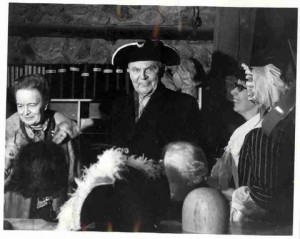 Ten months later, in June 1961, Diefenbaker stood up in the House and committed his government to the restoration as a way of “providing alternative employment for the persons affected by the closing of certain mines in Cape Breton.”(2) The next year, Cabinet agreed to expend $12 million over twelve years to restore the fortress, making it the heritage mega project of its time, the largest initiative undertaken by the National Parks Branch.(3) The partially restored fortress would become the jewel of the National Historic Sites division, what Banff was to the national park system. Like some of the national parks, unemployed men were put to work – albeit voluntarily – at the fortress. In all, some 225 coalminers were retrained as stonemasons, bricklayers, and carpenters. Others worked as labourers on the site. After the restoration was completed, many miners were able to take their new skills to other jobs.(4)

The restoration of Louisbourg was only one example of the many regional development initiatives the federal government undertook in the 1960s and 70s, under the auspices of programs and departments best known to Canadian historians by their acronyms: ARDA (the Agricultural Rehabilitation and Development Act) and FRED (the Fund for Rural Economic Development), to name some of the principal ones.

Developing the tourism potential of many rural and de-industrializing areas was an aspect of many of the projects funded by these programs. As Will Langford argues, with the winding down of coal operations, in 1975 the Cape Breton Development Company (DEVCO), a crown corporation charged with improving employment opportunities on the island, imported sheep – and not just any sheep, but sheep from Scotland. As lamb, they would be marketed to affluent urban foodies; but before they were mobilized as meat, the immigrant animals were meant to serve as visual reminders of the idyllic, rural, and folkloric Nova Scotia, part of the continuing tartanization of the province.(5)

The federal government’s investment in regional development was premised on a recognition of its responsibility to use its redistributive powers to eliminate the sizable pockets of poverty caused by the market. That was the rationale behind establishing equalization payments in 1957, funding rural “rehabilitation,” and creating an entire federal department dedicated regional economic expansion (DREE) just over a decade later. Doing so was borne of a lofty belief, articulated by Pierre Trudeau, that “every Canadian has a right to a good life whatever the province or community he lives in” and of a visceral fear that regional disparities in income were a threat to national unity.

The legacy of ARDA, FRED, and DREE is mixed: they often created largely part-time, service sector jobs to replace full-time work in the resource and manufacturing sectors. But what’s so striking from the perspective of 2015 is how acceptable government intervention to reduce poverty by investing in regional development was. Canadians, it seemed, were committed to a kind of state-sponsored spatial justice.

With the rise of neo-liberalism, that commitment to region and place has shrunk along with the state. In 2012, the Conservative government made deep cuts to Parks Canada, ones that hit the Atlantic region hardest, including the Fortress Louisbourg site and Cape Breton Highlands National Park. Those cuts eliminated important jobs in the broader tourism sector, ones that sustained small communities like Ingonish, where Glenn Warren has always lived.

Given this, we should be outraged about the $100,000 the feds gave to the NFNMF through Parks Canada – not just because it compromised the government consultation process, but because it represents the extent of our retreat from a vision of Canada as a particular kind of political community, a more generous one in which our commitment to social and spatial justice – to meeting the needs of strangers – is achieved through an interventionist state.

As important, entertaining, and fun as the debates over the “giga-kitsch” of “Mommy Canada” are, we can’t let them divert us completely from thinking and talking seriously about our collective commitment to region.

(3) C.J. Taylor, Negotiating the Past: the Making of Canada’s National Historic Sites and Parks (Montreal and Kingston: McGill-Queen’s University Press, 1990), 179.

(5) Will Langford, “Devco, its Transatlantic Sheep, and the Development of Cape Breton.” Paper presented to the Canadian Historical Association Annual Meeting, 3 June 2015.

One thought on “Remembering and Forgetting Canada in Cape Breton”