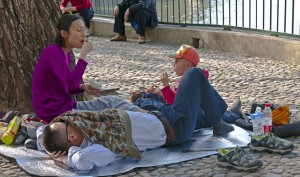 The Chinese government announced on October 29 it is now allowing all married couples the birth of two children effectively ending 35 years of one the most controversial population control policies in the world: the One Child Policy. The demise of this much reviled population policy comes after the 2014 relaxation of the One Child Policy, which allowed two children for parents without siblings, failed to materialize in higher birthrates. This recent announcement, however, does not signal a major advancement for women’s rights in China and there is not indication that the government will end the promotion of eugenics now that parents can choose to have two children.

The latest economic woes, stock market instability, a slower economic growth than in previous years, coupled with long standing concerns about the aging population, the pressure on the social security system and the shrinking labor force has prompted the demise of this policy. Ironically the staggering population growth was seen as a danger to socialism in the early 70s, and later on in the late 70s an impediment to China’s economic growth. Now that the population growth has slowed down, the Chinese government wants to make sure its supply of cheap labor does not dwindle, since its grandiose constructions projects and manufacturing economy rely heavily on the extraction of labor power of undocumented migrant workers.

On a personal level urban couples who might have wanted more than one child now have an opportunity to act on that desire, easing the onus on their existing child to care for the aging parents and grandparents. In a culture where respect for the elders is inculcated as part of traditional Confucian values, the state pensions insufficient to care for the needs of the elders, there was much worry about the burden that would mean for the current generation of children, who have grown spoiled during childhood, earning the nickname of little emperors or dragon children. The only child has generally been the center of attention lavished by both parents and often two sets of grandparents.

These children, however, are also burdened by heavy expectations from their parents and the prospect of supporting two elderly parents in the future. As a result, many of them have developed anti-social tendencies, perhaps exacerbated by growing up without a brother and sister. In many ways, the Chinese socialist emphasis on community has been obliterated by allowing these children to grow up without siblings. Instead children now struggle with being overweight and when they grow up they are driven by capitalistic concerns to succeed in a competitive labor market.

The question now becomes whether the Chinese government will now bring into legality the thousands of undocumented children that are discriminated against and do not have access to the same social benefits such as free public education because their parents were unable to pay the heavy fines often as much as six times the annual income.

Perhaps more jarring is the gender imbalance resulting out of Chinese traditional preference for boys. Faced with the possibility of having only one child many rural couples resorted to infanticide, abandonment of girls especially those with disabilities and sex selective abortion. The Chinese government sees the resulting gender imbalance as a possible source of political instability, as growing numbers of rural men are unable to find someone to marry. Bride kidnapping, bride buying from Vietnam and other poorer countries have been occurring in recent years at alarming rates.

Moreover, the government will likely maintain the active promotion of eugenics from the One Child Policy. As a scholar interested in eugenics I ordered books on eugenics at the Shanghai library only to receive two-dozen baby books, educating the public in healthy birth and eugenic birth. Ever since the 1980s the Chinese public has been inculcated with knowledge of genetics, eugenics and birth defects. Further re-articulations of eugenics occurred in the 1995 law restricting births related to genetic defects, which also supports pre-marital checkups inquiring into hereditary diseases pertaining to mental health and venereal disease.

The birth of children with Down syndrome or birth abnormalities was actively discouraged through large-scale propaganda. If you are to have only one child, then it should be as healthy as possible. Although the law prohibits sex-selective abortions, and parents in China cannot legally find out the sex of their baby before birth as a preventative measure, screening for genetic conditions is indicated and parents are encouraged to abort genetically unsound fetuses. As a result of this state propaganda for eugenic babies, an overwhelming number of disabled orphans in the public system, most of them girls are crowding the orphanages. Girls have also been adopted in large numbers by foreign couples wishing for a family. The promotion of eugenic births is unlikely to be impacted by this policy change.

It remains to be seen if the urban public, the main beneficiary of this policy change will take advantage of the new law, or if last year’s birth statistics are any indication over thirty years of indoctrination and emphasis on economic growth has worked too well, as more and more couples say that they cannot afford a second child even if they are now allowed to have one.

Mirela David is an assistant professor in the Department of History at the University of Saskatchewan. She is also a member of the Women’s and Gender Studies Program. She completed her PhD at New York University in 2014. Her research centers around the eugenic dimension of birth control and how eugenics infused debates on free love, sex, population and venereal disease in 1920s-1930s China.