If one peruses their televisions, computers, and streetscapes, they can’t help but forget that we have been in the throes of the Christmas season since November. But this form of Christmas celebration, tied so deeply with capitalism, belies the transformative optimism Christmas provided working-class socialists in the Depression, and still today. Much as Pope Francis’ criticisms of capitalism and consumerist Christmas celebrations amidst war offer a call to change, so did the Christian Left seek a new social order in the Great Depression via the message of Christ and Christmas. For them, the egalitarian and socialist ideals of a 2000 year old Humble Nararane Carpenter spoke the society they wished to build.

While much has been written about Christianity socialism among ministers-turned-politicians like Tommy Douglas, J.S. Woodsworth, and Stanley Knowles, less has been said about Christian socialism among Canadian workers and trade unionists. Yet if we look back to Depression-era trade union newspapers, we see a movement utilizing Christian scripture and imagery in order to agitate for substantive political, economic, and social reforms. After all, numerous contributors argued that Christ was not only God reborn, but was God reborn as a humble Nazarene carpenter: a workingman sent to bring a gospel of justice and equality for the downtrodden. Christ came not as a king, but as a pauper, and in so doing showed his allegiances. This identification with Christ as a radical workingman led many to propose a Christian social order that struck at the core of social and economic inequality, private property:

A theology which teaches that God is Mammon’s silent partner would necessarily be suspect in an age of folk upheaval…. Property needs not God to protect it…Jesus announced “Good News”[:] namely, that Heaven is passionately on the side of the people against the despotic tendencies of property; and under that leadership a messianic passion for men is announcing itself. The trouble is the working people at large have not yet come to behold The Carpenter.[1]

Not all pieces were necessarily so strident, but in general, there was a pronouncement that Christianity was incompatible with capitalism, at least as largely practiced. The solution for many in this case was finding in Christian theology a refuge from the cruelty of capitalist motivations, chief among them profit and property: “For it is written, ‘thou shalt not steal.’ Unhappily, our modern idea is based more truly on the idea ‘thou shalt steal.’ The whole system of Profit is theft.”[2] This was part of a general perception that Christianity pointed to the necessity of

fundamental changes to our social order…to insist upon the creation of an industrial society which shall have as its purpose economic security and freedom for the masses of mankind; to strive for…a social order which shall be based upon the teachings of the Great Founder of Brotherhood, in accordance with the code of rules laid down by Him two thousand years ago.[3]

One final example of this perception came from the reprinting of a United Church minister’s article, which argued that capitalism,

with its rugged individualism and profit motive, has fostered selfishness, greed and avarice…. It gives the lion’s share to the unscrupulous. It is unfriendly to the Christian spirit of social service…. Its underlying philosophy has well-nigh become an uncritical part of our mental make-up. It uses Christian labels to profit thereby.[4]

Clearly there existed a desire in some to dislodge Christianity from capitalism, but where does Christmas fall into all of this? Simply put, Christmas was a time when many such critics stepped back to reflect on the existing world, and offer hopes for a Christian social order. When one December 1930 piece asked, “What Would the Master Say if He Were Here Today,” the answer was that Christ would demand his followers recognize suffering, injustice, and hypocrisy during the holidays. Because while some celebrated with lavish gifts and presents, many had little material or emotional shelter from the harsh realities of daily life. In all this, it was felt by many that the egalitarian “message of the Great Commoner” was being obscured amidst the joviality of a privileged few.[5] 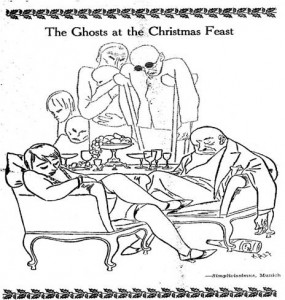 One illustration made this point by showcasing wealthy people napping after a feast. Behind them, are ghosts of neglected children, elderly, and the sick. The lesson was clear: “We have become aware of the need to do our good deeds more regularly, more systematically. Not without warrant is there a general suspicion that the contrast between Christmas benevolence and the starvation of body and soul which darkens civilization at other times reflects sadly upon our intelligence.”[6] It was the case that traditional Christian charity—epitomized by a power imbalance between the donor and recipient—could not address the rotten core of contemporary society. There was a strong sense that charity, as we have seen with contemporary philanthrocapitalists like Bill Gates and Mark Zuckerberg, subverted social change. 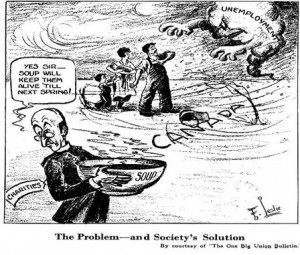 An excellent example was a December 1927 cartoon titled “The Problem – and Society’s Solution.” It portrayed a storm labelled “unemployment” bearing down upon a working-class family. In the foreground was a clergyman with a bowl of soup and a tag on his arm titled “charity.” Speaking to a figure off-scene, he says “yes sir – soup will keep them alive ‘till next spring.” The message: charity as practiced by the rich and conventional Christian institutions was meant to maintain subsistence and subservience, all in order to discourage the radical message of Christ from shining through.[7]

But despite all this, the Christmas season offered some a hope that “society has almost got to the point where it will recognize the duty of making collective use of its material achievement…Peace on earth, good will to all men, can be realized by the means now at mankind’s disposal. The era of plenty, of redemption from poverty, which Christmas symbolizes, is within reach.”[8] For such optimists, Christmas could be cast as a practical illustration of the possibilities for transcending capitalism. It was felt that “every year a few are added to the minority who recognize a flaw in the social system in which desperate poverty rubs shoulders with opulence. Every year brings recruits to the army of idealists who declare that the fruits of labour belong to those who produce them.”[9]

These messages and authors may seem disconnected from us nearly a century later, but in a Canada still substantially Christian, yet wracked with inequality, poverty, and economic uncertainty, the examples have a multi-faceted applicability. The ties between social justice and faith are still deep in Canada, and people conceptions of a better tomorrow, while undoubtedly based in material objects, are often underpinned by spiritual hopes and dreams. In this way, we need to see religious practice and philosophy for the complicated social project that it is. While in Canada Christian edicts have been used to oppress, placate, marginalize, and exclude, those same edicts, in addition to the contributions of other religious and spiritual denominations, have been integral in creating a more just and humane society.

More practically, these stories help us contextualize more modern discussions around Christianity and popular culture. As noted recently in The Guardian, any supposed ‘war on Christmas’ has come predominately from those who continue to embody the consumerist and capitalist conception of Christ’s birthday. In fact, even in a rapidly secularizing Canada, we can appreciate the topicality of a small boy and his family from the Middle East seeking refuge from homelessness, poverty, and violence. In all this, the art, history, imagery, and scripture of Christianity still has much to offer to those who wish “to comfort the afflicted and afflict the comfortable.”

Christo Aivalis is an Adjunct Professor of History at Queen’s University. His SSHRC-funded dissertation examined Pierre Elliott Trudeau’s relationship with organized labour and the CCF-NDP, and is being published by UBC Press. His work has appeared in the Canadian Historical Review, Labour/le Travail, Canadian Dimension, Our Times Magazine, and Rankandfile.ca. He is a dedicated activist within the NDP, various labour bodies, and municipal Governance, while also being a media contributor to multiple sources including the Toronto Star and CBC.