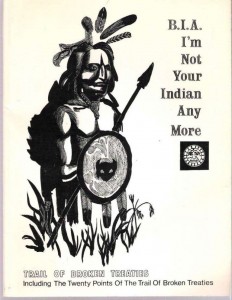 Cover from The Trail of Broken Treaties: B.I.A. I’m Not Your Indian Any More (Akwesasne: Akwesasne Notes, 1973)

When approximately thirty members of the Idle No More and Black Lives Matter movements entered the Indigenous and Northern Affairs (INAC) office in Toronto on April 13, 2016 to protest government inaction on the suicide crisis in Attawapiskat, the group, calling itself #OccupyINAC was drawing on long established political strategies. Indigenous peoples have occupied Indian Affairs offices before. Perhaps the most well-known was the 1972 American Indian Movement (AIM) occupation of the Bureau of Indian Affairs (BIA) headquarters in Washington, DC. The BIA takeover concluded the Trail of Broken Treaties—a cross-country march organized to protest broken treaty promises and the poor living conditions of Native American peoples across the country. When the caravan reached Washington, 500 American Indians took over the BIA office, destroyed records, and began a seven-day occupation, during which they presented AIM’s “Twenty Point” position paper to President Nixon, listing their demands. Less well known are the occupations that occurred in British Columbia three years later.

On May 1, 1975, Indigenous activists in BC took part in the pre-planned, simultaneous occupations of Department of Indian Affairs (DIA) district offices in Kamloops, Williams Lake, and Vernon. Like the BIA occupation and the current #OccupyINAC movement (which spread quickly to Indigenous Affairs offices in Winnipeg, Vancouver, Regina, and Gatineau), this burst of coordinated action, dubbed “Militant May,” used peaceful occupations and pan-Indigenous solidarity to resist settler colonial intransigence and forward well-defined political aims.[1] Activists, including Indigenous leaders, grassroots peoples, and AIM members sought to dismantle DIA, demonstrate Indigenous sovereignty, and resolve the outstanding BC land claim.

Although direct action was not a new strategy in 1975, it was an unusual approach for the Union of BC Indian Chiefs (UBCIC), the organization responsible for organizing Militant May. Since its inception in 1969, the UBCIC sought to resolve the land question through policy papers and political mediation, but DIA soon overwhelmed the organization with bureaucratic service delivery.  Frustrated with DIA interference and paternalism, as well as inadequate program funding that left Indigenous communities perpetually underserviced, the UBCIC and its member communities decided to “become radical” and declare political and fiscal independence from DIA. They resolved to reject all forms of federal and provincial funding and use coordinated occupations, blockades, and strategic law-breaking for one month beginning 1 May 1975 to achieve their stated aims. Militant May, therefore, involved a multi-pronged approach that incorporated DIA occupations as part of its core strategy.

The impetus for Militant May built on these local circumstances, but also drew on the global political mood and the political histories of more radical Indigenous communities. Red Power, AIM, and other political channels including ethnic nationalisms and global decolonization movements were active at the time, and BC Indigenous activists were part of these global networks. At the same time, specific BC communities including Osoyoos and St’uxwtews (among others) organized highly publicized protests and blockades in their territories, and the UBCIC built off these strategies. 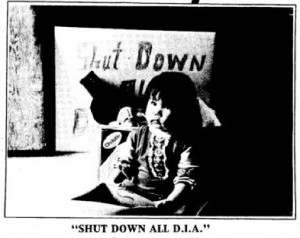 True to the UBCIC’s promise that seizures and demonstrations would “explode all over B.C. on May 1,” that morning hundreds of activists simultaneously occupied DIA offices in Kamloops, Williams Lake, and Vernon.[2] The events were both well planned and attended. The Kamloops demonstration, led by Tk’emlúps te Secwépemc Chief Mary Leonard attracted one hundred supporters from the twenty-five bands in the Thompson-Nicola region, while the Williams Lake takeover drew one hundred and sixty participants from the fifteen bands in that area. Support quickly spread across the province with occupations at the Bella Coola and Nanaimo offices beginning shortly after. Organized locally to promote a wider single goal, activists planned for the occupations to continue until the federal government agreed to negotiate the land claim, and until DIA permanently closed its offices and ceased to exist. Viewing the occupations as expressions of Indigenous sovereignty, participants argued that, in the absence of fully functioning offices, Indian Affairs no longer had a purpose, and its budget should be returned to the bands to administer.

The occupations were also distinctly local. The Kamloops takeover, for example, deviated from the others by employing a class-based strategy to shut the office down. Elsewhere, activists did not interrupt office operations or place limitations on staff, but peacefully occupied the space and discouraged community members from conducting regular business there. In Kamloops, Thompson-Nicola community members began with this strategy, but after two days, moved outside the building and set up a picket line.[3] Unlike the other offices, which continued to function — albeit in limited form — at Kamloops the picket prevented Department employees from entering the office altogether. This was because employees were members of the Public Service Alliance of Canada Union and refused to cross the picket line. Through the picket, the Kamloops protestors quickly achieved their goal of closing down the district office, which forced DIA officials to consider alternatives. As early as 23 June 1975 DIA regional director Larry Wight was arranging for district staff to be retrained and relocated to other government agencies. Wight did not express any hope that the situation would be resolved.[4]

The district occupations were successful. Despite the inherently confrontational nature of the takeovers, they were, for the most part, well received by district DIA employees and the Minister of Indian Affairs Judd Buchanan. The organized and peaceful nature of the occupations, as well as broad participation by community members elicited sympathy and acceptance. Although maintaining a paternalistic tone in his response, Buchanan promised to support band wishes. By September, activists succeeded in permanently closing the offices in Kamloops and Vernon with DIA transferring administration to the thirty respective band councils throughout the Thompson River and Kootenay-Okanagan Districts.[5] Protestors achieved similar outcomes in Vernon and Nanaimo. Ultimately, the occupations and resulting disruption to DIA services allowed many communities to envision governance unfettered by Department considerations, and this was a powerful boon to sovereignty.

The occupations also extended to the regional Department of Indian Affairs office in downtown Vancouver where Indigenous leaders and activists and one hundred AIM members from across the province, came together to shut the office down. Vancouver Sun reporter Ron Rose described the Vancouver or “Black Tower” occupation as noisy but peaceful, and outlined how an AIM security force maintained order by allowing Department staff to move freely, banning drugs and alcohol from the premises, and restricting the occupation to Department offices only.[6] Like the district occupations, the Black Tower takeover had a strong and well-articulated political goal. Occupiers designed the action to last until the June 25 land claims meeting between the province and Indigenous peoples. They argued the occupation would function to pressure a suitable agreement and would encourage DIA to turn over its budget to the communities.

Yet, in contrast to the district occupations where Department officials took activists’ goals seriously, Wight saw the Black Tower occupation as illegitimate – the work of foreign radicals who had co-opted the BC Indigenous movement. Failing to account for AIM’s strong presence in Canada, its unique expression in British Columbia, and widespread community support at the occupation, Wight homogenized Black Tower occupiers into a trope of foreign radicalism to dismiss the activists’ objectives. This opposition took its toll as Wight quickly called in the police and activists quietly left the offices in a “gesture of responsibility,” to begin an information picket outside. The occupiers did not use force to escalate their tactics, but employed the same types of direct action applied in the districts. The presence of AIM, then, made little difference in terms of the occupation’s goals and tactics, but made a significant difference in how DIA officials evaluated it.

Militant May, like #occupyINAC exposes the complexity, careful negotiation, and transformative power of direct action. Both also demonstrate the overwhelming belief in pan-Indigenous unity and solidarity across movements as an effective strategy for achieving real political change. Yet, forty-one years after Militant May, #OccupyINAC reminds us how Indigenous peoples are still fighting some of the same battles activists engaged with in 1975. Despite the current climate of “reconciliation,” where Prime Minister Justin Trudeau has committed to implementing the Calls to Action of the Truth and Reconciliation Commission and the United Nations Declaration on the Rights of Indigenous Peoples (UNDRIP), we find that meaningful change has yet to occur.

Sarah Nickel is an assistant professor of Indigenous Studies at the University of Saskatchewan.

[1] At the Gatineau and Regina offices, protestors staged demonstrations outside the offices. In response, INAC suspended operations at these locations. The Toronto office occupation ended on April 21, 2016.

[6] “Indians continue occupation of downtown gov’t offices,” Vancouver Sun, May 10, 1975, 1 and 11. The “Black Tower” was the colloquial name for the Regional Headquarters of the Department of Indian Affairs. Louise Mandell, interview with author, Vancouver, BC, March 12, 2012.

One thought on “(Re)Occupied: #OccupyINAC and British Columbia’s 1975 Militant May”