This is the second of two posts responding to “Debating the Confederation Debates of 1865” a two-week series we ran in partnership with Canada Watch.

As the countdown to our country’s 150th  anniversary begins, Canadians are hungry for information about their country’s past and contemplating its future. The Confederation Debates – an online and largely crowd sourced initiative – will bring the records of the Numbered Treaties (1871-1921) as well as the colonial and federal legislative debates that preceded each province’s entry into Confederation between 1865 and 1949, into the public discussion while also making them accessible to future generations. Since it is a largely crowd sourced project, anyone can contribute to the work and discussion! 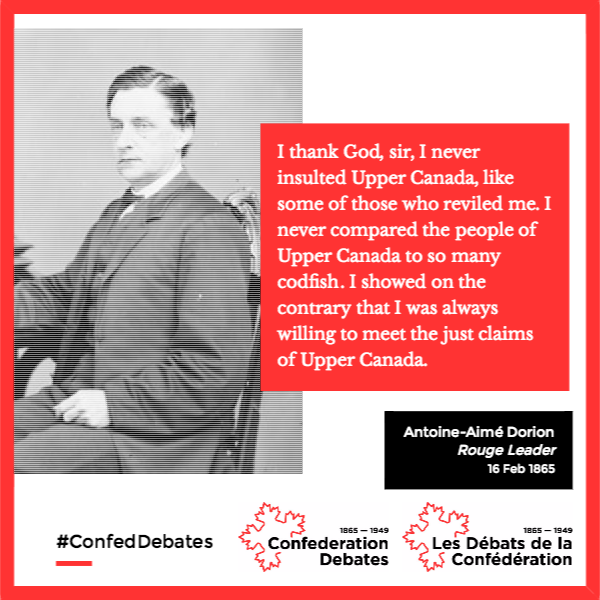 The Confederation Debates posted its first “Quote of the Day” to social media on 1 July 2016. We will continue posting content from all stakeholders in both official languages for the next year. Anyone can log onto our website (click the image to visit the site), transcribe a page, and flag some text for these posts.

As the past two weeks of Confederation-focused essays demonstrate, Canadians will bring diverse backgrounds and conflicting perspectives to what promises to be important, and at time heated, public and private discussions. Popular imagination, and Robert Harris’ group portrait of Canada’s ‘founders,’ limits Confederation to the1860s. Even if we expand the so-called ‘Confederation years’ to encompass the entry of BC, Manitoba, and PEI by 1873, we still ignore Alberta, Saskatchewan, Newfoundland and the territories. This latter date also misses nearly all of the Numbered Treaties between Indigenous Peoples and the Canadian state between 1871 and 1921. The records for a few of the provinces’ Confederation discussions are online, but they are often difficult to find, buried in thousands of pages of unrelated debates, or require a subscription to access. Other colonial debates are only accessible in archives. The Numbered Treaty records suffer from the same access issues.

In these debates, Canadians clashed over issues that continue to resonate today. Indigenous Peoples demanded relationships that were more engaged than federal officials envisioned. Colonial politicians weighed their desire for local autonomy against the lure of federal wealth and power. French Canadians tried to protect their language rights inside and outside of Quebec. Atlantic Canadians feared that Central Canadian interests would squash their provincial economies. Ultimately, some colonies joined, while others held out for better terms.

The Confederation Debates will contribute to the next year’s discussions of what Canada was, and what it has become, by helping Canadians of all ages to engage the laudable and disappointing perspectives that underlay our country’s founding and continue to inform its politics today.

First, anyone with a Google account and 5 to 15 minutes of spare time can login to our transcription website (transcribe.theconfederationdebates.ca), find a page from any debate or negotiation, and correct transcription errors that our scanning software may have made.

These volunteers are more than human photocopiers. Our transcription platform also has a “Memorable Text” button that allows volunteers to alert us to text that they find interesting, funny, offensive, or profound. The teams responsible for posting the “quotes of the day” as well as the education lesson plans (see below) rely on these alerts to develop their respective projects. Transcribers, therefore, also analyze their pages for several public history deliverables. Anyone interested in adding this sort of experience to their CV / resume just has to log in and work through several pages. Every contributor’s name is logged and will be displayed next to their pages on a legacy website permanently hosted by the University of Victoria beginning in 2017.

When it is finished, the website will also host introductions by well-known scholars concerning each province’s journey to Confederation. These short introductions will bring the local, federal and Indigenous content into dialogue, and call attention to the themes and issues that continue to inform present-day politics.

Many Canadians, however, will want to engage small chucks of the debates. We are therefore packaging short portions of the records in a variety of forms that will allow people of all ages to engage these important documents. These include:

If any of these projects interest you, please consider transcribing for the project, following us on social media, and / or contact me (dheidt@uwaterloo.ca) to learn how you might be able boost your CV / resume by contributing in other ways to this national legacy project.

Daniel Heidt, PhD is Project Manager for The Confederation Debates and the Administration Manager at the Centre on Foreign Policy and Federalism. His research interests include Canadian political history and Arctic history. The author of several articles, his first co-edited book will be published in spring 2017.