If you are a Canadian as obsessed with current U.S. politics as I am, you probably are aware of the strange presidential election south of the border. In fact, even if you are not interested in US politics, the theatrical run-up to the 2016 US election seems hard to avoid. The Republican candidate, Donald Trump has repeatedly filled headlines with his flagrantly racist and sexist views, as well as his fondness of dictators and the use of nuclear weapons. His approach to immigration includes building monolithic walls along first the Mexican, and then Canadian border. With US citizens threatening to move to Canada in droves if Trump is elected, giving rise to “dating sites” attempting to match US citizens with compatible Canadians, this presidential race has become a truly North American preoccupation. 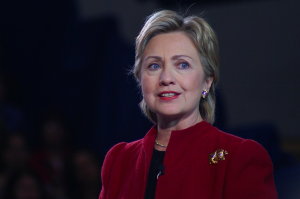 Many peoples’ hope for this election, if begrudgingly, rests on the shoulders of the Democratic candidate, Hillary Clinton, the former secretary of state. Although she has by no means courted controversy as much as Trump, she has experienced her fair share of drama. One of the more recent is a video emerging of Hillary Clinton stumbling into her SUV after attending a 9/11 memorial last Sunday. Later in the day, it was revealed by Clinton’s doctor that she had been diagnosed with pneumonia on Friday. Viewing it as “not a big deal”, Clinton continued with her campaign duties, until the fateful stumble made it apparent she might just have to give herself time to recover. This event was widely touted afterwards by the media as the “health crisis” of Clinton’s campaign that could threaten her bid for presidency. It fuelled conspiracy theories that emerged relatively early in the campaign that the Democratic candidate is in poor health, whether due to a brain injury, a heart condition, Parkinson’s Disease, or even syphilis.

There has been some understandable backlash to such claims, one of which emerged from CNN journalist, Christiane Amanpour, who pithily asked the question, “Can’t a girl have a sick day?” She then invoked history to point out an unfair double standard, listing examples of previous male presidents before Clinton who had some sort of health-related issues, yet were never questioned as to their ability to fulfill their duties as head of state. It seems fair to reason that Amanpour may be correct in thinking that the preoccupation with Clinton’s health is a product of historically ingrained sexism.

One might argue that an obsession with the bodies of potential or acting national leaders is not limited to Clinton. There has, no doubt, been some discussion about Barack Obama’s rapid aging since he took office, or even Justin Trudeau’s ascension to Vogue’s list of “10 Unconventional Alternatives to the Sexiest Man Alive”. Yet no one has demanded to see these men’s medical records like they have for Clinton. There may be some historical reasons why. Indeed, the particular shape of the sexism that has given rise to the conspiracy theories surrounding Clinton’s health strikingly reflects certain ideas of women and their bodies since at least the nineteenth century.

Women have arguably been conceived as more prone to illness since ancient times, when Greek medical theorists proposed the idea of “wandering wombs” that wreaked havoc on female bodies, leading to chronic disease.[1] The theory of wayward wombs never completely faded from view, but something nevertheless changed by the late nineteenth century. As Wendy Mitchinson described in her now classic study, The Nature of their Bodies, “what occurred in the late nineteenth century was an intensification of the notion of women’s vulnerability to illness because of the very nature of her body.”[2] Beginning with the onset of puberty, through to menstruation, birth and finally menopause, women could seemingly not escape their inherent fragility.[3] The motif of the “sick woman” even gained a sort of sacred quality to it in the nineteenth century. Women who passively accepted the limits of their supposedly infirm body were viewed as virtuous, and even holy, especially in comparison to their more active and politically inclined counterparts.[4] Pundits argued that women’s propensity for perpetual illness precluded them from taking on public roles and particularly roles of public office. After all, women’s sick bodies necessarily affected their minds, making them less rational and intellectually inferior to men, and thereby unsuited to positions of leadership.[5]

Despite being repeatedly challenged by feminists, the conviction continues that women’s bodies somehow impede their ability to exercise authority or make the critical decisions necessary of political representatives. This perceived inability remains rooted within women’s bodies, whether due to their hormones, a tendency towards illness, menstruation or menopause.  Regardless of how many doctors’ notes Hillary Clinton makes public, her unpredictable female body is repeatedly offered as reason why she cannot be president of the United States. This is not a claim that is peculiar to the 2016 US election, but one that aligns with a much longer history of how women’s bodies have been perceived.

[1] Christopher A. Faraone, “Magical and Medical Approaches to the Wandering Womb in the Ancient Greek World,” Classical Antiquity 30, issue 1 (April 2011): 1-32.

[2] Wendy Mitchinson, The Nature of their Bodies: Women and their Doctors in Victorian Canada (Toronton: University of Toronto Press, 1991), 49.