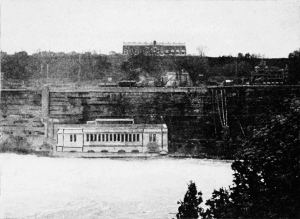 The politics of energy are omnipresent in historical and contemporary Canadian society. Who owns energy, how it is produced, and who benefits from its production and distribution has been central to the rise and fall of governments. In some cases, as with Pierre Trudeau’s National Energy Program (NEP), the regional tensions it inflamed are still evident to this day.

Perhaps the most interesting and current debate around energy hails from Ontario, where the provincial Liberal government—without seeking a mandate in the 2014 election—has begun the process of privatizing Hydro One, which has been in public control for more than a century. And while the majority of opposition has come from the left and organized labour, the advent of a public energy system in Ontario predates nearly all of Canada’s major unions and leftist parties.

Surprisingly given our modern ideological landscape, a public hydro system in Ontario was created in 1906 by James P. Whitney’s Conservatives (the title quote is attributed to him), who fought successfully against Liberal George W. Ross’ rejection of public energy control, which was driven by a distrust of public ownership as well as Ross’ pecuniary conflicts—which included being an executive of a company involved with energy production, as well as bestowing energy contracts as political favours.

The rationale for a publically-controlled energy system from Whitney’s perspective was quite forward-thinking. Ontario in the early 1900s was on the verge of mass industrialization, and electrical power was the lifeblood of such a system. To have electricity owned privately—either by foreign interests, domineering monopolies, or a patchwork of petty capitalists—served neither the public interest nor the needs of an increasingly capitalized and urban province. Whether for the worker, farmer, consumer, municipality, or industrialist, affordable, accessible, and consistent power networks were imperative.

It was thus that, throughout the 20th century, a publically-owned energy system has been a driving force in Ontario becoming Canada’s industrial heartland. And while perhaps less so than in Quebec—where the creation of a public hydroelectric system was fundamentally intertwined with a sense of national pride—there was a general feeling that Ontarians as a collective owned and benefitted from such a crown corporation

In our own times, many of these issues continue to play out. The argument from the current Liberal regime is that privatization actually democratizes ownership amongst individual shareholders, and the public selloff is the only way to both lower debts and raise much-needed infrastructure capital to work on things like roads and transit.

But the broad opposition to—or at least apprehension towards—privatization is telling. Indeed, defenders of public energy control are found beyond the ranks of social democrats and public-sector union leaders, even if these groups are leading the charge.

For instance, while some Chamber of Commerce voices see potential innovation in this round of privatization, many chapters are worried that it might cause price increases and volatilities, which are harmful to short and long-term profitability. Individual businesses have similar worries around price volatility and less public transparency into the corporation.

Likewise, more than a third of Ontario municipalities have officially opposed the sale of Hydro One. Most have done so because there is a feeling among constituents that the deal will not benefit average Ontarians, that privatization often leads to a decline in labour standards and that the potential increase in energy costs will make it more expensive to power homes, small businesses, and municipal properties themselves.

In direct conflict with Premier Wynne’s privatization rationale is Ontario’s Financial Accountability Officer Stephen LeClair, who suggested that Hydro One is a profitable body and that selling substantive portions of it will lead to a “negative hit in the long run.” He also legitimized concerns from labour, citizen and business groups by suggesting that the government has been unclear about the true costs and benefits of this deal, perhaps in an effort to use the sticker price of a one-time sale to mask declines in revenue that go beyond the next election.

From this perspective it appears, at least in part, that Ontario’s contemporary Liberals are playing short-term politics with the power grid, much like Ross’s Liberals did in the dying days of their government. So while Ontario has changed greatly from 110 years ago, there are still deep similarities in terms of energy’s universal importance. Over the next 110 years, Ontarians of all stripes will still require affordable and reliable energy access and the public’s control of such a foundational resource is necessary, not only for a vibrant economy, but for a functional democracy.

While the current government looks at energy holdings as an asset to offset debt and infrastructure costs, we would do best to think back to 1906, and realize that our energy system is a key piece of infrastructure for generations to come. We may not yet fully grasp the full extent of our technological future—neither did Whitney’s Conservatives a century and more ago—but like them we can set ourselves correctly with a public system.

As Whitney said after his 1905 victory over Ross:

“I say on behalf of the Government, that the water power all over the country should not in the future be made the sport and prey of capitalists and shall not be treated as anything else but a valuable asset of the people of Ontario.”

Christo Aivalis is an adjunct professor of history at Queen’s University. His dissertation examined Pierre Trudeau’s relationship with organized labour and the CCF-NDP, and has been accepted for publication with UBC Press. His work has appeared in the Canadian Historical Review, Labour/le Travail, Our Times Magazine, Ricochet and Rankandfile.ca. He has also served as a contributor to the Canadian Press, Toronto Star, CTV and CBC. His current project is a biography of Canadian labour leader A.R. Mosher.

One thought on ““The water power of Niagara should be as free as the air:” The Past, Present, and Future, of Democratic Energy Control in Ontario”