This post by Matthew Barlow is presented in partnership with Au delà des frontières / Beyond Borders, the blog of the Wilson Institute for Canadian History at McMaster University 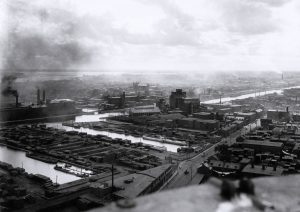 In May 2017, my first monograph, Griffintown: Identity & Memory in an Irish Diaspora Neighbourhood, will be published by UBCPress.  Around the same time, my colleague G. Scott MacLeod and I will release our documentary film, The Death of Life of Griffintown.  As you can imagine, I am very excited about this, as it will culminate a decade-and-a-half of work on Griffintown.  For those who don’t know, Griffintown is an inner-city neighbourhood in Montreal.  And while today it is under rapid regeneration with the construction of dozens upon dozens of condo towers, it was historically a working-class neighbourhood. Indeed, the Canadian industrial revolution began in Griff in the 1830s.

While the population was a heterogeneous combination of Irish-Catholics, Anglo-Protestants, and French-Canadians, the neighbourhood is remembered today for its Irish population.  Griffintown has emerged as the Irish neighbourhood of Montreal, even if only in memory, as a counterpart to more famous Irish neighbourhoods like Southie in Boston and the Five Points and Hell’s Kitchen in New York.  My work has centred around the constructions of identity in the Irish-Catholic population of the neighbourhood over the twentieth and twenty-first centuries.  The Irish of Griffintown were a diasporic people by the dawn of the twentieth century, as Irish emigration to Canada had more or less dried up over half a century earlier, during the Irish Famine (1845-52) once passage to the United States was made more affordable by the repeal of the Navigation Acts.

An imagined Ireland has remained part and parcel of the Griffintown experience, as the people of the neighbourhood’s diaspora found ways to represent the old country back to themselves. In the past two decades, in the memorializations, representations of Ireland, and Irish culture are central to the re-formulation of the imagined Griffintown.  In this process, we can see how the Irish-Catholic culture of Griffintown was one forged out of the ambivalence and hybridity of their experience in Montreal. 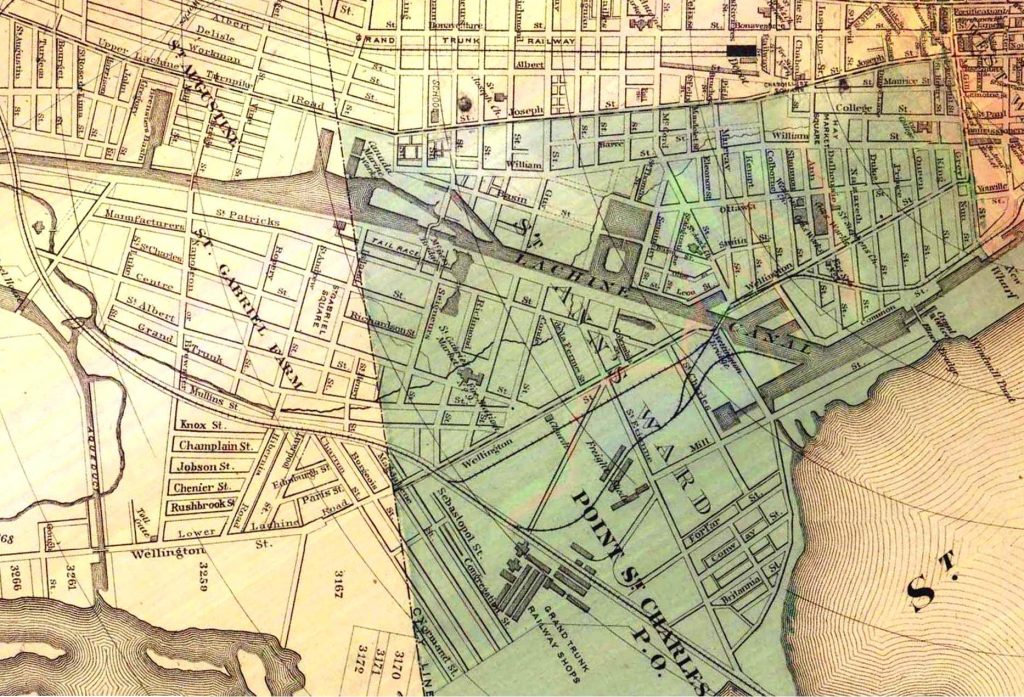 This ambivalence in Irish-Catholic Griffintown was a product of the hybridized, diasporic culture that had developed there by the late ninteenth century, long after emigration from Ireland to Canada had ended.  Diaspora as a site of inquiry for academics is a social condition and a process through which identity is created and re-created, and reinforced, based on the values of difference between the diasporic group and the host society.  These differences are predicated on the memory work of the diasporic group, which draws on its identity and memory of the homeland.

But diaspora is even more complicated than that.  Being a diasporic people or individual means standing between places, and across time.  Thus, we need to look at the historical and contemporary elements in any diasporic group’s ‘diachronic reality.’  Identities are networked, and for the diasporic group and individual, they are networked both locally and transnationally.  They are both real and imagined.  And more, diasporic communities are bound together through a collective memory and through their memory work, forged and reinforced through the quotidian.  They don’t abandon their old country behaviours and national allegiances upon settling in the new country.  Rather, these old country behaviours are imbued with new customs and loyalties in the new home, which are then layered over the old.   Or, put another way, the Irish didn’t arrive in Griffintown as ‘blank slates.’  And, this layering process automatically and perhaps necessarily creates a marked and fundamental ambivalence to both homeland and new land. 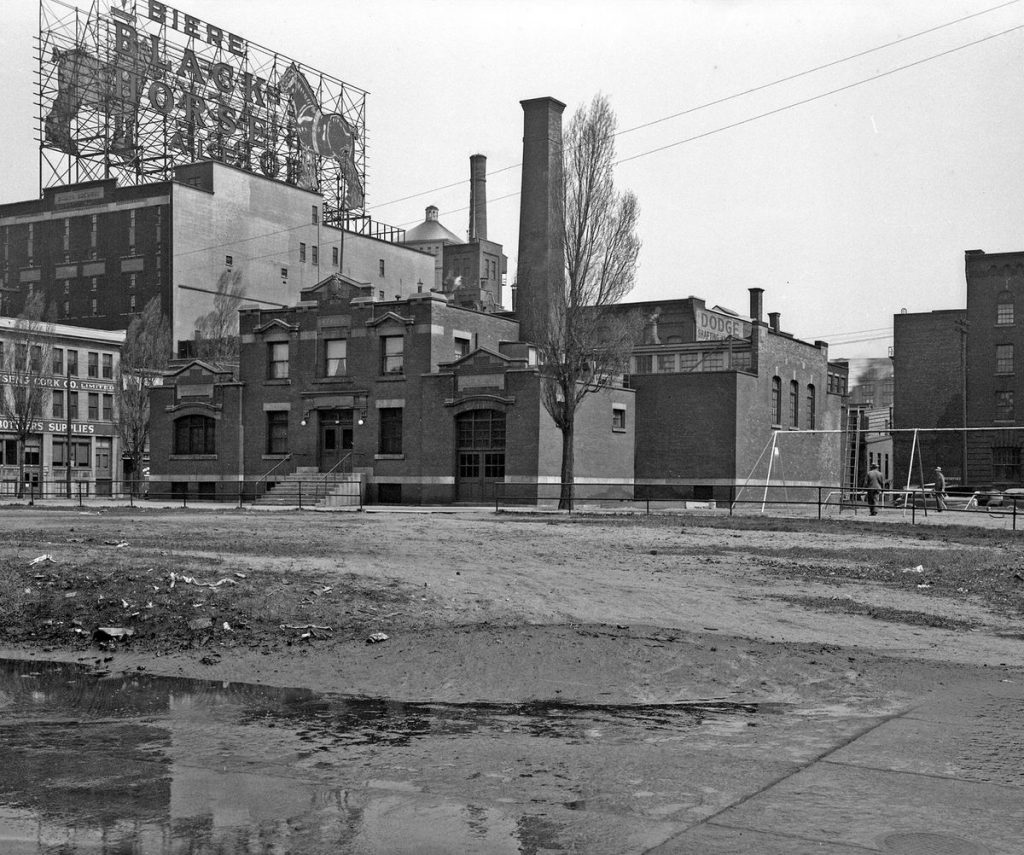 Griffintown was a particularly ambivalent locale, as the clergy and nuns of St. Ann’s Parish, together with their parishioners, worked to forge and police the boundaries of their very carefully constructed Irish-Catholic identity throughout the nineteenth and twentieth centuries.  And all of this was predicated upon memory work, which describes the process by which we manifest or articulate cultural memory as both individuals and members of groups.  Griffintown was both the first and the last of Montreal’s Irish neighbourhoods.  It was central to the forging of Irish-Catholic identity in Montreal as a whole in the nineteenth and twentieth centuries, to say nothing of the twenty-first.  This identity, in turn, was based on the extensive memory work carried out by the rank-and-file of the population of Griff, as opposed to it being an elite-driven process as it is in most instances of diasporic culture.

For example, each 17 March, the St. Ann’s Young Men’s Society put on a play and pageant at the Théâtre Monument-National on the rue Saint-Denis, in the east end of downtown, far from Griffintown.  Here, the Young Men and their support acts performed their Irishness for themselves, but also for their fellow Griffintowners, to say nothing of the wider Irish Montreal population and the city as a whole, all of whom packed into the Monument-National, filling it to the rafters on St. Patrick’s Day in the first half of the twentieth century.

The Irish-Catholics of Griffintown worked to memory-scape their neighbourhood; they invested particular places around the neighbourhood with their cultural memories, both Irish- and Griffintown- based.  One of my favourite books of all time, Keith Basso’s Wisdom Sits in Places, describes the manner in which the Cibeque Pima Apaches of Central Arizona have historically embedded in their landscape the stories, histories, and lessons of their way of life and their culture.  And this is embedded in the educated young Pima gain as they grow up on the traditional lands.  Thus, when someone has transgressed communal norms, or requires words of comfort, the Pima make what appear to be random and abstract references to locations.  The individual, however, understands, and will know what the speaker meant.  In this way, the Pima have memory-scaped their territory.  And while the memory-scaping of Griffintown is not as intense as that of the Pima, it still happened.  Walking the streets of Griffintown with former Denis Delaney, as he tells stories to a small crowd on a walking tour, I can see how each story he tells us is firmly embedded in the concrete of the neighbourhood.

This shouldn’t be surprising to anyone, really.  Memory was performed daily on the streets of the neighbourhood, from obvious examples such as the Procession of the Corpus Christi, to the conversations Griffintowners held on the streets, in their kitchens, in the hallways at school, in the break room in the factories.  They drew on the stories of an imagined Irish past to create an Irish landscape in Griffintown.  In this way, they harnessed what Delores Hayden has called the ‘power of place, or “the power of ordinary landscapes to nurture citizens’ public memory, to encompass shared time in the form of shared territory.”[1]

Matthew Barlow teaches at the University of Massachusetts – Amherst and works as a public history consultant.  His first book, Griffintown: Memory & Identity in an Irish Diaspora Neighbourhood, will be published by UBC Press in May 2017.  He is also working on a documentary with film-maker and artist G. Scott MacLeod, The Death and Life of Griffintown, which will be released in summer 2017.