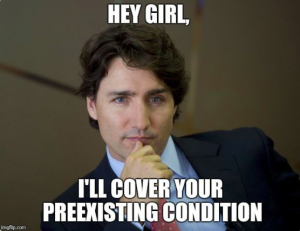 A Canadian-born meme became briefly popular on social media less than a week after the US House of Representatives passed the American Health Care Act (AHCA) in early May. Modeled after a series of other well-known “Hey Girl” memes (typically featuring Canadian actor Ryan Gosling), the meme pictured Prime Minister Justin Trudeau surrounded with the words: “Hey Girl, I’ll cover your pre-existing conditions”. This was one of a few distinctly Canadian responses to the GOP’s attempt to repeal and replace the Affordable Care Act, a comprehensive health care bill originally put in place by former president Barack Obama in March of 2010. Not only was the meme a tongue in cheek retort to an earlier Trump campaign’s depiction of Canada’s supposedly “disaster” of a health system. It also replied to some of the concerns raised against the AHCA, including where it would leave people with pre-existing conditions and women in particular – individuals who are viewed more generally as ‘high risk’. Although perhaps unbeknownst to the makers of the meme, or US Congress for that matter, this characterization of women  as in need of greater and more costly healthcare resources has a long history.

Commentators and women’s rights activists argue that the AHCA “will be especially disastrous for women” for a number of reasons. One of the most controversial is the Act’s proposal to allow individual states to apply for a federal waiver that would grant them the option of not implementing several rules that are in the current Affordable Care Act. One rule that could be waived includes the stipulation that insurers must charge the same premiums to anyone of the same age, regardless of current health – a provision particularly important to people with pre-existing health conditions. If states are successful in obtaining such a waiver, it seems highly possible that individuals with pre-existing conditions would pay significantly more for insurance after being placed in “high risk” insurance pools. Notably, the bill does not name specific pre-existing conditions, whether those of women or not, yet even pundits who argue that the AHCA is not targeting certain groups, still admit that there is some possibility for women to be disproportionally affected. Although perhaps inflated by social media, there seems to be considerable and valid concern that psychological trauma as a result of rape or sexual assault will be deemed one of these pre-existing conditions, much like it was before the Affordable Care Act was introduced along with other conditions most closely associated with women.[1]

These debates around the AHCA bring up a compelling history surrounding women and their health – including the ways in which women’s bodies have been placed beneath the medical eye from the nineteenth to twenty-first century. As I’ve written on before for ActiveHistory, women’s bodies, along with several biological processes most closely associated with women, including pregnancy, menopause and menstruation, became increasingly pathologized and thus much more tightly regulated under a burgeoning medical profession, especially from the nineteenth century onward.[2] At the same time, women were identified as more often suffering from long-lasting psychological trauma, especially after experiencing a sexual assault or rape.

Medical doctor Ambroise Tardieu was perhaps the first to suggest that there might be a psychological element to rape survivors’ experiences. In 1857 Tardieu published Etudie medico-legale sur les attentat aux moeurs or A Medical-Legal Study of Sexual Offences, one of the first works in the field of forensic medicine to be exclusively devoted to sexual assault and rape. He described the resulting emotional state in women survivors as a combination of moral, as well as physical duress – an important parallel to make when attempting to argue for long-lasting trauma, a concept that up until that time was still almost exclusively linked to a physical injury.[3]

Other French medical practitioners and researchers picked up where Tardieu left off, including psychologist Pierre Janet. Janet was fascinated by “dissociation” a psychological state of disconnection between mind and body. Notably, many of his patients were women who had been raped or sexually assaulted. He hypothesized in these cases and others that experiences like that of a rape often could not be fully assimilated into a person’s normal memory processes. As a consequence, his patients experienced a sort of splitting-off from consciousness so as to cope with what had happened to them.[4] Janet theorized in 1906 how these memories could resurface, such as in dreams, as well as through different forms of destructive behaviour, seemingly unrelated, that emerged from a wholly “subconscious” desire for justice or retribution.[5]

As historian Joanna Bourke has written, the theories of Janet again gained some traction several decades later. From the 1970s onward, feminist-minded psychiatrists and medical practitioners argued from case-study evidence that rape and sexual assault were especially damaging to a person’s emotional, as well as physical state. By the 1980s, a growing number of medical professionals noted parallels between the psychological effects of rape or sexual assault, similar to what Janet had recognized, with the sense of trauma experienced by war veterans. War-time trauma had begun to be widely referred to as Post Traumatic Stress Disorder, a condition first named by psychoanalyst Abram Kardiner in 1941.[6] By granting women survivors of sexual assault a similarly recognizable medical status, something “neutral,” which institutions believed they could now invest their time and energy, women survivors of rape and sexual assault were arguably afforded more resources to address their now medically-recognized symptoms.[7]

If you were hoping for a happy ending, however, I am afraid this story does not have one. Although women can now seek a formal diagnosis, for which they can obtain medical help, they still face characterizations as ‘high risk’, which in the end works to render affordable healthcare less accessible – or at least if the proposals of the AHCA are any indication. And although more medical studies and resources have been created to serve women’s health needs, including when experiencing trauma, it would be a stretch to call these resources fully comprehensive or easy to access. In fact, despite clever memes, this is an area that Canada has to answer for as well. The 2015 federal brief Sexual Violence Against Women in Canada identifies a number of country-wide resources for women experiencing trauma, yet the authors also recognize a persistent lack of data and under-reporting, ongoing stigma and a need to improve coordination among service providers. It would seem the further medicalization of women’s bodies and minds has not only failed to solve all our problems. It may have created some new ones.

[2] One of the most classic Canadian study of this characterization of women being Wendy Mitchinson’s The Nature of their Bodies: Women and their Doctors in Victorian Canada (Toronton: University of Toronto Press, 1991), 49, 77.