If you drive north from Highway 401 in southern Ontario along county road 45, you will come across the reserve of Alderville First Nation, nestled on the shore of Rice Lake. If you travel in this direction, which summer cottagers and scenic adventurers often do, you will notice a striking monument in the middle of the endless fields and rolling hills. This monument commemorates the sacrifices made by the Alderville First Nation from the First World War onwards.

The Alderville Monument in 1949. (All photos are the author’s.)

As a child, I would often attend Remembrance Day ceremonies that were held at the monument. My grandfather, James Marsden a local Legion president and son of a previous Alderville Chief, usually performed the ceremony for the reserve. The ceremonies included various veteran groups, school children and members of the local Indigenous reserve. This monument has been an important place of remembrance and identity for the local reserve since it was created. On a personal level, it is extremely significant to my family as it is where my great-great grandfather (Moses), my great grandfather (Frederick) and various great uncles’ names are memorialized. Over the last five years I have missed these ceremonies as I moved to Sudbury to pursue post-secondary studies.

However, this spring in a seemingly random occurrence, I was required to read Johnathan Vance’s award-winning book Death So Noble: Memory, Meaning and the First World War for one of my final graduate history seminars at Laurentian University. The book won Vance the Sir John A. Macdonald award in 1998 for the most significant contribution to the understanding of Canada’s past. Vance dove into archival records and looked at various monuments, commemoration events, poems, music and letters to conclude that a united national myth evolved as a way for survivors to cope with the horrors of the First World War.[1]

Vance argues that this myth was created by average Canadians and in “each case, even significant ethno-cultural or socio-economic discrepancies seem to have had little impact on how the war was remembered.”[2] He contends that the myth had “strong patriotic and assimilationist overtones,”[3] and that “the nation it envisioned was a melting pot, in which all inhabitants would be rendered down into a single type” – White, Anglo-Saxon, and Protestant.[4] Although, the myth never came to its ultimate fruition, Vance states that people still embraced these ideas as it filled a void.  He also argues that “the memory was not conferred on them from above; it sprouted from the grief, the hope and the search for meaning of a thousand Canadian communities.”[5]

Yet at least one community’s search for meaning is completely disregarded in Vance’s study. When I turned to the 201st page of Death So Noble, I found a grainy picture of the Alderville Monument prominently on display. Realizing that I finally recognized one of the monuments Vance was describing, I quickly read the note beneath the picture. He wrote: “The bizarre memorial in Campbellford, Ontario. Was it intended as a monument or an advertisement for the stonemason who erected it?”[6] I was dumbfounded. It seemed that Vance not only places the memorial nearly 30km away in Campbellford, but also makes a sarcastic comment regarding the unique structure, despite it being the first Indigenous war memorial in Canadian history![7]

Map of the Alderville-Campbellford area.

No, this was not an advertisement for a stonemason, but a community-driven project built in 1927 to mark the sacrifice of the reserve. This unique modernist structure goes against the traditionally “Victorian” monuments that Vance utilizes to make up a large portion of his book. The unique design is for a modern aesthetic that the local people felt symbolized an alternate version and memory of the War.

If Vance had utilized an image of the entire monument or had read its inscription, he would have found the true reasons why the monument was built. Written on the bottom of the monument is the inscription which states:

The cube on the very top symbolizes the four corners of the earth. The three globes beneath the cube symbolize the Holy Trinity. The three large pillars supporting the above symbolize the three holy virtues – Faith, Hope and Charity. The square base on which the cenotaph stands symbolizes the four freedoms – freedom of speech; freedom of religion; freedom from fear and freedom of the press. The nine large cubes situated around the Cenotaph represent the nine men who were killed in World War 1. That chain that is comprised of 35 links that encircles the Cenotaph is fastened to the 9 cubes represents the 35 residents who served in World War 1, and at the same time represents eternity.

This highly personalized justification for the monument stresses freedom and world peace. Not only does the style of the monument contrast with the traditionalism Vance emphasizes, but these themes stand in sharp contrast to Vance’s assertion of a unifying myth with overwhelmingly patriotic and assimilationist overtones.

The Alderville Monument in the 1960s.

Moreover, the Indigenous people of Alderville were the ones who took responsibility for completing the monument, showing their own form of agency during a period of increased restriction by the Department of Indian Affairs. The monument was completed in 1927 with the help of a local architect, Alf Mckeel. However, the entire structure was made by hand-stirred cement that was lifted by Indigenous men and powered by a crew of women providing the necessary meals. The community members also donated the plot of land for the monument and gave $800 to help pay for the materials.

One community member remarked in 2013 that over the last “four generations, the monument has acted as a beacon, meeting place, a destination, a point of solemn reflection, and a hallowed Centre of our community. It bestows upon us a responsibility to look up to it and be reminded up the sacrifice that it represents, when half or more of the able-bodied men in this community signed up for service in 1914 and 1915 to fight overseas.”[8] This monument became the heart of the town and strengthened the identity of the Alderville Community. Moreover, the community demonstrated agency in a period of controlling government policies and numerous obstacles that would arise over the ninety years.

The closer you get to a story like this the more interesting and complicated it becomes.  Vance explains near the end of his book that “Native Canadians also found that reality failed to live up to the promise of the myth. Even had they been attracted by Duncan Campbell Scott‘s blatantly assimilationist vision, they would have found that it lacked even the advantage of sincerity. For Scott, enfranchisement was simply a strategy to eradicate all traces of Native heritage.”[9] Between 1913-1932, Scott served as the Deputy Superintendent in the Department of Indian Affairs which regulated the rules concerning Indigenous groups in Canada. He is infamously known for his involvement in the creation of the Residential schools and Vance states that “He had little time for… rhetoric of the war as proof of Natives’ right to full partnership in Canada.’”[10] Enfranchisement entailed an Indigenous person consenting “to abandon their Indigenous identity and communal society to merge with the ‘free, individualistic and non-Aboriginal majority.”[11] This type of enfranchisement was the most common method that Indigenous peoples lost their Indian Status in the years between 1857 and the 1960s.[12]

Moreover, the enfranchisement policy enacted by the Federal government still excluded the right for enfranchised Indigenous people to vote in any election until 1960. My great-great grandfather, Moses Marsden was elected chief of Alderville in 1904 and then chose to enfranchise in 1909, giving up his rights as an Indigenous man in order to move to nearby Peterborough with his young family.[13] Despite being dis-enfranchised from the band, his name is still listed on the monument and he was still invited to annual dinners that occurred throughout the 1950s “where 75 sat down to a wild duck dinner at his great grandfather Norman’s place [every year].”[14] This clearly demonstrates that “all traces of his Native heritage” were never entirely forgotten or erased despite harsh enfranchisement laws. 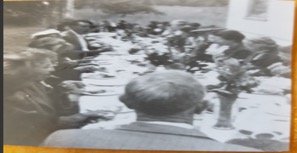 Hopefully this article rewrites a small, yet significant piece of history in a widely accepted book on memory in the First World War. The meanings behind this single Indigenous monument are more complicated than the last twenty pages of Vance’s book or this article can possibly convey. I hope it also serves as a demonstration that more work needs to be done to show how the First World War was remembered among First Nations groups. This past May, one hundred years ago, Private William Hagar and Private Archie Simpson of Alderville First Nation were killed in action in France during the First World War. Their memory lives on, through the first Indigenous war memorial in Canadian history.

Jackson Pind is a Masters, History, candidate at Laurentian University and will be beginning his doctoral studies on the history of education this fall at Queens University.

2 thoughts on “The Alderville War Memorial: A Bizarre Monument or A Community’s Search for Meaning?”