A memorial for missing and murdered Indigenous women in Halifax made headlines last week, largely because it was interrupted by a group of five men wearing matching shirts and carrying a red ensign. Smart-phone videos of the event show the five identifying themselves as members of the Proud Boys, a far-right men’s organization founded in 2016, and disrupting the memorial by asserting that Canada is a “British Colony.” Further investigation of their social media accounts revealed the group later posed for a picture while giving a white-power salute. Since being identified as members of the Royal Canadian Navy, apologies arrived quickly from the Canadian Armed Forces (CAF), including a comment from Chief of Defence Staff General Jonathan Vance that the five could be facing a discharge.

There is much to unpack from this event and subsequent discussions in the media, but the public revelation that five serving sailors are active members of a confrontational far-right organization provides a stark reminder of the CAF’s troubled relationship with racism in the ranks. The Proud Boys’ decision to disrupt a memorial for missing and murdered Indigenous women resonates uncomfortably with reports of sustained discrimination faced by Indigenous personnelin the Forces, and raises questions about the work the CAF can do to mend relations between settlers and Indigenous peoples in Canada. 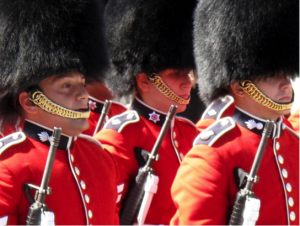 The five Proud Boys’ affinity for Canada’s British heritage certainly found a comfortable home in the recently re-branded CAF. Even without the Harper government’s 2014 decision to revert to British-pattern rank insignia, the CAF remains noticeably British in its traditions and appearance. The Ceremonial Guard that parades on Parliament Hill during the summer, for example, is nearly identical in appearance to the British Guards regiments that keep watch at Buckingham Palace. The CAF undeniably traces its origin to the British Army.

Can the Forces contribute to the process of reconciliation while continuing to celebrate its imperial lineage? A solution may be found in another of Britain’s settler colonies: New Zealand.

The New Zealand Defence Force (NZDF) shares the CAF’s imperial origin, but occasionally catches international attention for its displays of Maori ceremony during parades or commemorative services. In 2012, a video of New Zealand soldiers performing a haka for a service member killed in Afghanistan went viral. Last year, an NZDF contingent marched down the Champs Élysées at the head of France’s July 14th parade, led by the NZDF Maori Cultural Group. 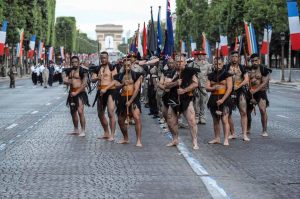 Members of the Maori Cultural Group rehearsing for the 14th of July parade. NZDF Facebook page

These prominent displays of Maori ceremony have not gone unnoticed in Canada. In 2007, historian Jack Granatstein praised New Zealand’s contribution to the war on terror and noted the high proportion of Maori in the NZDF, though he believed this was because “the military is one of the few routes that Maoris can take to get good jobs.”

Not satisfied with this conclusion, the Canadian Forces participated in an exchange program with the NZDF to learn more about New Zealand’s approach to settler-Indigenous relations in the military. The Canadian Military Journal published a report based on the visit, which briefly outlined the NZDF Maori cultural program. The report attributed the high enlistment of Maori service personnel to the NZDF “Maori identity,” which allows Maori personnel to maintain their culture after joining the military. Arguing that a minority group can only assert itself once it has reached a certain size, relative to the majority, the report recommended programs to promote Indigenous enlistments by creating a more accommodating setting for Indigenous recruits in the Forces.[1] When the report was published in 2007, such programs were already underway in Canada.

Since 1995, the Defence Aboriginal Advisory Group worked to institute a number of programs to recruit and retain Indigenous personnel. This includes the Black Bear, Bold Eagle, and Raven summer training programs, the Canadian Forces Aboriginal Entry Program, and the Aboriginal Leadership Opportunities Year, which invite Indigenous youth to undergo military training and participate in Indigenous cultural programs. While these initiatives encourage Indigenous youth to consider the CAF as a career, they also promise to provide those who do not enlist with “new skills that would benefit them and their communities.”[2]

Besides these programs, the CAF began allowing Indigenous personnel to display parts of their culture while in uniform. Dress regulations allow Indigenous servicemen to keep a braid and Métis members can wear a sash when attending cultural ceremonies in uniform. Two First Nations service members created the Aboriginal Eagle Staff in 2002, and service personnel can request to carry the staff at military or public events. These initiatives assist Indigenous recruits’ transition into the military and encourage Indigenous personnel to maintain cultural practices during their service.

The actions of the five Proud Boys and the reports of discrimination against Indigenous personnel, however, reveals that accommodating Indigenous cultures in the CAF only addresses half the problem. 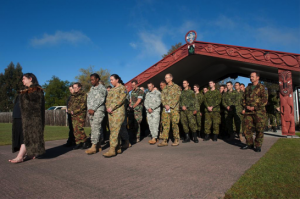 International contingents participating in Exercise Southern Katipo 2013 are welcomed with a powhiri onto the marae at Waiouru Military Camp. NZDF Flickr (CC BY-NC 2.0)

A closer examination of the NZDF reveals that reconciliation in the military is more than the result of a strong recruiting effort or outward displays of Maori ceremony. While the report in the Canadian Military Journal contained some basic errors, its focus on recruitment overlooked the work undertaken to create deeper cultural change in the NZDF.[3] In 1995, the New Zealand Army built its own marae as part of a wider NZDF strategy to provide Maori cultural training for all of its members throughout their career.[4] From basic training to senior staff courses, members of the NZDF are taught a corresponding level of te reo Maori[5] and tikanga.[6]

For Pakeha[7] personnel to perform a haka or powhiri might border on cultural appropriation, but Maori Cultural Advisors work against this by teaching the meaning and protocols behind each ceremony. Arguably the most notable quality of these programs is the way NZDF personnel are taught. While European methods of teaching seek to transfer knowledge from one to another – in the way CAF programs for Indigenous youth intends to impart skills and knowledge that benefit Indigenous communities – the NZDF approach to Maori cultural training sets out to teach by cultivating mutual respect between settler and Indigenous personnel.[8]

Twenty years after the formation of the Defence Aboriginal Advisory Group and the founding of the New Zealand Army National Marae, researchers continue to assess these initiatives. A 2014 study found that CAF programs, such as Black Bear and Bold Eagle, succeed in attracting Indigenous participants but few go on to pursue a career in the military. Anna Harpe’s recent Master’s thesis reveals some qualitative shortfalls of the program. In a survey of participants who decided to enlist, respondents struggled to name any advantages that the Black Bear program offered for their military careers, while others suggested that the CAF might be more welcoming for Indigenous recruits by “simply informing the average soldier about the Aboriginal people.” One respondent observed that “once you leave Black Bear you discover that the army is very, very white.”[9] Debbie Hohaia’s research on the NZDF, on the other hand, found that Maori interviewees gained confidence in both their culture and their military service through Maori cultural training, while Pakeha service members gained a deeper appreciation for Maori culture. One Pakeha member of the NZDF noted that the inclusion of Maori ceremony in military parades is “just what we do around here; it is the norm.”[10]

As the CAF expands its efforts to attract and retain Indigenous personnel, the NZDF cultural training program shows that Indigenous culture plays an important part in the process of reconciliation. While their programs are not perfect, the NZDF success in building mutual respect between Maori and Pakeha shows that military forces in Britain’s settler colonies can practice traditions outside of their imperial lineage. One Pakeha member observed that “without the bicultural policies in place, the NZDF would still be like the British Army.”[11] Maori ceremony became a source of pride for all members of the NZDF and this example provides a guide for the CAF to move beyond its efforts to accommodate and acknowledge Indigenous personnel and to institute broader programs that build a shared respect for Indigenous culture. The positive response to cultural training in the NZDF shows that military tradition need not play into the assumptions of socially-conservative chauvinist Anglophiles such as the five Proud Boys.

Steve Marti is a postdoctoral fellow in the Department of History at the University of Delaware. He is revising his dissertation into a monograph for UBC Press titled To Mark Our Place: Communal Mobilization in Australia, Canada, and New Zealand, 1914-1918. Find more about Steve’s work on his website: stevemarti.com

[4] A communal meeting place, often the traditional seat of an iwi or sub-iwi.

[5] The common language spoken by Maori.

[6] Broadly defined to include culture, customs, tradition, and etiquette.

3 thoughts on “Strong. Proud. Ready to do More”