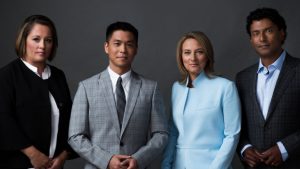 Since Peter Mansbridge announced last year that he was retiring from his post as anchor of The National, there has been plenty of speculation about how the show would use his departure as an opportunity to revamp. Criticisms of the show have ranged from political bias to being too centered around its anchor and many looked forward to a fresh start. As a result, yesterday’s announcement that the anchor position will be split among Rosemary Barton, Andrew Chang, Adrienne Arsenault, and Ian Hanomansing created quite a stir.

While The Beaverton may have won for the funniest story about the change, the announcement simultaneously harkens back to the CBC’s earliest days, when announcers were not expected to be household names, while also signalling a potentially dangerous shift in how the national broadcaster intends to deliver its news.

During the Moose River Mine Disaster in the spring of 1936, J. Frank Willis became a celebrity for his fiery and extravagant descriptions over Canadian Radio Broadcasting Commission stations. When the CBC started later that fall, General Manager Gladstone Murray wanted to make sure that no personality was bigger than the Corporation, which contributed to his effort to standardize the accent and vocabulary heard on CBC programs.

Over time that policy was challenged by the likes of Matthew Halton, whose updates from Europe during the Second World War made him one of the best-known journalists of the period. Since then, the idea that journalists should remain largely anonymous has really virtually disappeared. One could argue that Knowlton Nash and Peter Mansbridge shattered that idea in Canada as both are inextricably linked with the CBC’s wider news service.

In an era where news outlets are routinely accused of partisan motives, returning to the days of less prominent individual journalists can help alleviate that problem. For the CBC, the news division will no longer be identified by a single person, whose personal beliefs can come to represent the entire organization. Additionally, four people, who have very different professional backgrounds, bring different perspectives and, with that, a layer of protection against claims of partisanship.

If the CBC had just announced the personnel change, that would have been fine. But the Corporation added something to its announcement that made yesterday feel like yet another step in the ever increasing shift towards American style news.

When Sun News Network failed, there was some relief in knowing that alarmist news was not a successful business model in Canada. But that was two years ago and in the interim the news cycle has continued to get faster and more dependent on social media. This has made news organizations more reliant on click-bait headlines and soundbites to drive digital traffic to the detriment of well-researched, in-depth coverage.

The National, to a certain extent, has been an outlier in this shift. The show’s format mirrored the newspaper – hard news at the beginning, followed by analysis, and then personal interest and investigative pieces. Compare that to American cable news, which doesn’t actually give news. Instead, it offers a quick soundbite, a headline in the lower third of the screen, and has a number of guests arguing about the issue at hand for three-to-five minutes. CNN is, by far, the worst offender of this, while FOX News and MSNBC aren’t much better, especially as their respective organizational partisanship erode their legitimacy.

Compare that to The National. It was never a perfect show, but in giving time for prolonged segments like At Issue and The Insiders, the program allowed space for conflicting perspectives in an engaging format. Rather than have people yell at each other, the segments included dialogue and discussion. The benefit was that, unlike too much of the American content, viewers could actually hear the conversation and could come away better informed of the opposing perspectives.

This is why the first sentence in the CBC’s story on the change is so concerning: “Four CBC journalists will share anchor duties as the network revamps The National to offer an expanded digital focus along with more insight and analysis on the day’s news, the public broadcaster announced today.”

An expanding digital focus is likely to include shorter segments that can be easily packaged for Twitter and Facebook while “more insight and analysis” is on the slippery slope towards more argumentative panels. And if this comes at the expense of the longer, investigative pieces that have become a staple of The National’s second half, viewers will not be better served.

And while the CBC claims that each of the anchors will still report from the field, moving Adrienne Arsenault into the studio feels like a big loss. She is the best reporter the CBC has, with a tremendous ability to find stories and develop sources around the world. Pulling her out of the field could be a sign that the CBC is going to increasingly rely on wire reports and the BBC for its international coverage.

This is why yesterday was such an interesting moment for the national broadcaster. It’s announcement was a reminder of its earliest – and arguably most successful – period while at the same time signalling a response to the ever-changing media landscape that could compromise its news organization moving forward.

The CBC turns 81 in November while the news service turned 76 in January. Yesterday it looked to the past in its effort to look to the future. In thinking about it, a J. Frank Willis quite jumped to mind. He once described his experience at Moose River by saying “you were alert enough in certain ways, you could still do the old biz, you know, picking up any news that was going – but in the meantime you were not physically that well.”

Sean Graham is an editor with Activehistory.ca and host of the History Slam Podcast.