I will confess that I am haunted by Marius Barbeau, the twentieth century anthropologist and folklorist, about whom I wrote my doctoral dissertation. Barbeau has done a lot for me. He’s helped build my CV because I’ve written — perhaps, some might say, too much — a good deal about him. He got me my job. Indeed, my “job talk” was an exploration of the issues his work raised for Canadian cultural history. He’s gotten me invited to conferences, led to offers of collaboration, brought me books to review, helped me meet colleagues at faculty seminars where I’ve talked about him and, I am certain, gotten me promoted. He is responsible, in large measure, for those step pay raises we, as faculty, receive over the years. 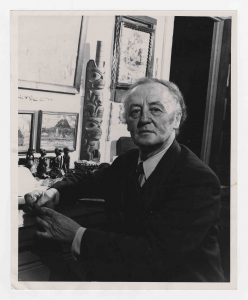 One of the things I learnt from Barbeau was how not to interact with Indigenous cultures. I learnt about power and voice and what happens when Indigenous people cannot speak in their own names because their voices will be ignored while their culture is displayed in museums or at tourist sites. I learnt, in short, about cultural appropriation. But, that learning has only brought with it more questions.

This essay is the third in a series I’m writing about history and cultural appropriation. In the first one, I tried to argue that taking an historical perspective on cultural appropriation brought something new to the table in terms of the debates that surrounded this issue. And, I suggested, this might be needed. The discussion that we are having right now about cultural appropriation is not a leftist fantasy (a PC run amok) but a product of shifting power relations as Indigenous peoples stake their own claims to be heard and to control their heritage. In the second essay, I tried to show how an historical analysis might look at cultural appropriation as part of a broader cultural process in which different intellectuals, artists, political figures, boosters, and a broad range of others are caught up, as it were, without necessarily knowing it. Asking historical questions allowed people to see themselves as part of a process and, in this way, perhaps ask questions about how they related to it. It served, I hope, to humanize the issue and allows us to avoid what I suggested had become a stalled discussion that really ignored the past and history as process even when it spoke in historical terms.

In this post I want to shift grounds and revisit my own ghosts, as it were, because, I want to argue, Barbeau’s ghost brought with him a series of others. In short, I worry that I am as caught up in cultural appropriation as those I often criticize and I wonder where this leads me? To be up front from the start: I don’t have any easy responses to this and I think this is my point. There is, and always will be, a certain ambiguity that haunts most — but not all — of the ways history is practiced in contemporary Canada when it comes to cultural appropriation. For Settler society, this is an ambiguity that cannot be resolved.

Settler society is another one of those terms that has gained new currency but which actually goes back a while. I haven’t looked up its precise genealogy but it is another term I recall hearing for the first time in grad school in the early 1990s. At that time, the term was used as an analytic framework that allowed for comparison across societies (US, Canada, Australia, and the like) and I recall it being deployed with little reference to Indigenous Peoples.

The currency it has gained is stark.  As a framework, the term “settler society” is used to narrate the shifts and continuities in a set of deeply embedded discourses and power relations that served to dispossess Original Peoples in a myriad of ways and to maintain power inequalities. If I were writing Barbeau’s story today, it would be about the organization of social studies (anthropology, folklore, museums, history) in a Settler society.

As it were, my work was about voice, the politics of tradition, and cultural appropriation. Lurking behind my text were thinly discussed Indigenous voices and they appear periodically in other things I have written over the years as well. In some ways, those voices helped move along my studies — and with it my job, conference invites, etc. — because they provided the counter voice to colonialism’s culture. They were the voices contesting Settler colonialism and the authoritative claims its social scientists, artists, historians, public figures, and others made.

Where does that leave me? Have I appropriated the very voices in whose name I am claiming we need to be careful speaking? The short answer is “yes.” This begs another question: what is to be done about that?

I want to be as clear as I can on one point before proceeding further. I am not saying that one person can never speak in another’s name, nor that historians, anthropologists, sociologists, demographers and a range of others should never study “the other.” Indeed, in Canada this would make for pretty poor scholarship. Power relations and demographics being what they are, it would mean that white scholars would never discuss First Peoples, straight scholars would ignore the LGBTQi community, Settlers would ignore more recent immigrants, etc., and so historians, let’s say as an example, could never discuss dispossession or the validity of treaty rights or the horrors of the residential schools. My view — and I suspect this view is widely shared — is that these subjects (and, others like them) are just too important to not discuss. For those of us who teach in universities, they are too important to our students’ futures to neglect.

In my first post I suggested that one of the things that history tells us about researching other people is that it carries with it a heavy burden of humility. Let me make this point clearly too: what this means is that the conventions of history as a discipline often serve us poorly because we are encouraged to speak in authoritative voices when we likely should be more circumspect. It also means that we need to be cognizant of the power relations embedded in contemporary society and within which history as a discipline functions. It does not mean that Settler historians should ignore subjects but it does suggest that we have to understand that we make our living on the backs of other people.

Many of the Settler scholars I’ve read in the last decade who write about Indigenous societies have done so with grace and sympathy, with a careful treatment of sources, and with the idea that they are participants in a conversation about the past that must, necessarily, include the descendants of the people about whom they are writing. I won’t embarrass anyone by offering a list of names, but Settler historical research has moved a good distance from where it was a generation ago with regard to the research into First Peoples or the range of other groups marginalized in Canadian society. It has encompassed new sources, asked different questions, re-oriented perspectives, brought in new voices, and looked to develop a more empathetic and conversational approach to the study of marginalized peoples.

All this is to the good. But the fact that, even with that, we engage in some measure of appropriation and that we — if we are Settlers writing about Indigenous People — speak, in some way, in another’s voice can’t be avoided either. The complexities and power relations of Settler society allow us no place of innocence on which to stand. I’m not saying that historians should stop trying to write more accurate histories, nor that history is any worse than other disciplines. Instead, what I am saying is that we need to understand who benefits and who does not from certain presentations of the past (however dialogic they may become) and what that entails for Settler scholars.

In my next post, I’ll try to end on as positive a note as I can, but for now what I am suggesting is that we need to recognize the tension that sits at the heart of contemporary historical writing and research in Canada: it cannot avoid some measure of complicity in the very cultural appropriation it decries.

Andrew Nurse is a professor in the Canadian Studies program at Mount Allison University and a contributing editor at ActiveHistory.ca