For the second time in a matter of months, Conservative Senator Lynn Beyak has drawn ire for her comments on Indigenous people in Canada. Earlier this year, in March, Beyak was criticized for her defence of the Residential School System when she stated that the Truth and Reconciliation Commission’s final report let the “remarkable works, [and] good deeds” of those who ran the schools “go unacknowledged.” While this statement deserves comment for its praise of the mechanisms that caused long-lasting harm to hundreds of thousands of Indigenous children, not to mention the generations that followed, her most recent statement made in an open letter published on her website is where I want to place my focus. Beyak’s words raise questions about Canada’s repeated failure to acknowledge readily available histories that for at least the past four decades serve to justify recognition of Indigenous rights.

In the letter, entitled “More of the Same is Not the Answer,” Beyak states that

The mountains, rivers, and streams belong to all of us. None of us are leaving, so let’s stop the guilt and blame and find a way to live together and share. Trade your status card for a Canadian citizenship, with a fair and negotiated payout to each Indigenous man, woman and child in Canada, to settle all the outstanding land claims and treaties, and move forward together just like the leaders already do in Ottawa. All Canadians are then free to preserve their cultures in their own communities, on their own time, with their own dime.

The letter manages to accurately draw the conclusion that “what [Canada is] doing is simply not working.” At the same time, however, it demands that Indigenous people surrender their rights and identities, and submit to the ‘privilege’ of Canadian citizenship for their own good. Her suggestion is remarkably ironic; Beyak has identified what Canada has been attempting (and failing) to do to Indigenous people since before Confederation as “a real change.” Despite her attempts to diverge from the norm, Beyak is upholding that norm in a way nearly identical to her federal predecessors by challenging the existence of Aboriginal and Treaty rights, unique by virtue of a continuous, historical relationship between Indigenous people and settler governments.[1] And like those who came before her, Beyak’s comments demonstrate an active refusal to acknowledge the history that both explains and justifies ‘special status,’ as well as an unwillingness to take Indigenous voices seriously. 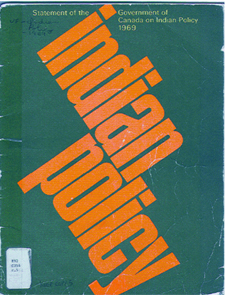 Perhaps most clearly, Beyak’s letter mirrors much of the federal justification for backing the controversial 1969 White Paper. The proposed policy developed out of a federally commissioned report written by anthropologist Harry B. Hawthorn in 1966 that determined Indigenous struggles in Canada were caused for the most part by the residential school system, Canadian assimilation policies, and the government’s active denial of Indigenous self-determination. Hawthorn concluded that Indigenous people needed to “be provided with the opportunities and resources to choose their own lifestyles, whether within reserve communities or elsewhere.” In the discussions that followed the report’s release, First Nations people across Canada called for the recognition of Aboriginal and Treaty rights and self-determination.

Instead of acknowledgement of these rights, Prime Minister Pierre Trudeau and Indian Affairs Minister Jean Chrétien instead named Indigenous ‘special status’ as the cause of the state of Indigenous affairs and released the White Paper, which, as Beyak described, “rejected a nation within a nation,” and laid the groundwork for a removal of the Department of Indian Affairs, Indian Status, and as such, would have rendered all treaty agreements—both pre- and post-Confederation—null and void.

The problem with this rejection was its misunderstanding of Indigenous nationhood and ignorance of the treaties. Indigenous people were not, and are not seeking to be recognized as a nation within a nation. They were calling for the government to remember the agreements they had made with Indigenous people as one sovereign nation to another on shared land. The White Paper, federal assimilation policies, and now Beyak’s comments, are built on the incorrect assumption that in Canada Indigenous people were not partners or allies, but wards of the state.

In response to widespread Indigenous rejection of the White Paper[2], the Canadian government was forced to engage with a history they had previously ignored. In the decades following the Paper’s demise, a series of Supreme Court decisions like Calder et al. v. BC attorney general (1973), R v. Sparrow (1990), Delgamuukw v. British Columbia (1997), and R v. Marshall (1999), and government-commissioned reports like those from the Royal Commission on Aboriginal Peoples (RCAP) (1996) and the Truth and Reconciliation Commission (TRC) (2015) have time and time again affirmed the rights that Beyak and so many others deny. That her claims are still being made in 2017 shows not that these rights don’t exist, but that Canada clearly isn’t listening to the history that justifies them.

At this point, with the amount of information available to Canadians, comments such as those Beyak made should come as a surprise. The fact that Indigenous groups nationwide are still fighting for the fulfillment of treaty agreements and self-determination should also be shocking. The unfortunate thing is that this behaviour is something that I as a historian, and also a Mi’kmaw woman, have come to expect.

I’m a firm believer that education is the key to reconciliation, but as I stated in a blog post earlier on this website, it isn’t the education itself that is going to lead to reconciliation, but what is done with that education. Canada has had ample opportunity to forge a better relationship with Indigenous people rooted in the treaties and pre-existing Aboriginal rights. Beyak’s comments, and evident commitment to challenging Indigenous claims, not only demonstrate that these opportunities have been lost on federal officials, but that the government has not learned from its own failures.

The very fabric of the structure of Aboriginal and Treaty rights, as unique rights that should be honoured, are rooted in a history that those in opposition refuse to learn. It’s why Senator Beyak can reference the information I’ve cited here in her letter, and still come to the conclusion that assimilation is the best thing for Indigenous people in Canada. [3]

Indigenous rights are built on a historical foundation; so too should history remain at the core of the steps this government takes to acknowledge and protect those rights. The fact remains that until we acknowledge this, the current climate of Indigenous affairs in this country will remain “More of the same.”

[3] Beyak references both the Truth and Reconciliation Commission’s Final Report and the Royal Commission on Aboriginal Peoples in her letter.