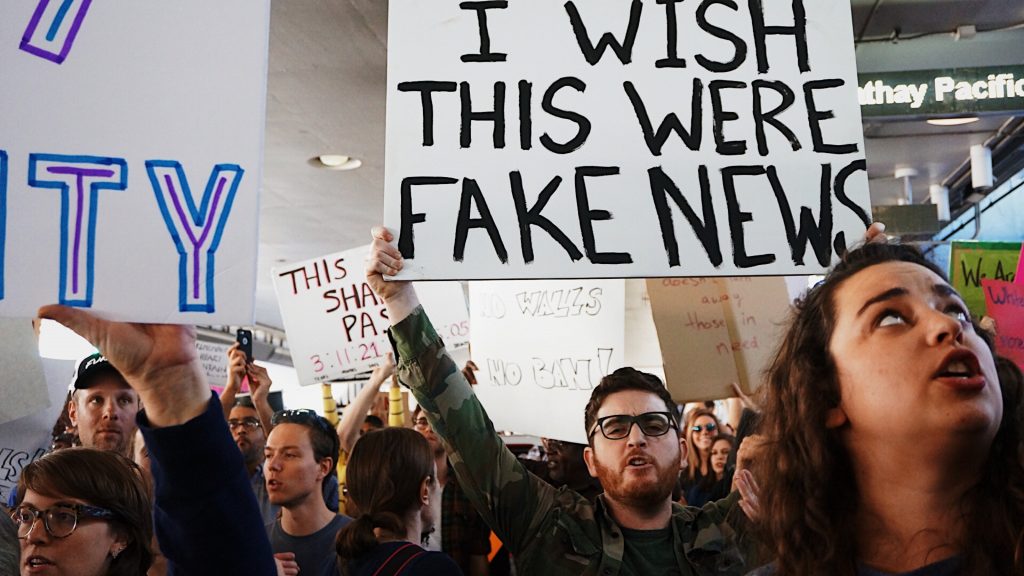 Photo by Kayla Velasquez on Unsplash

During the 2016 American presidential election, but especially after the victory of Donald J. Trump, the term fake news became part of the public lexicon. The confluence of social media, digital campaigns, and the monetization of internet ‘clicks’ led to numerous instances of groups outright fabricating news stories, either to serve ideological objectives, or even just to generate high web traffic and income. And while such falsifications were more likely to emanate from the Trump/Republican side of the equation, Clinton/Democratic partisans were not innocent from the use of—or belief in—fake news that confirmed their ideological biases. And in a time where Trump is president, Democratic Party partisans, according to some, have become increasingly vulnerable to recirculating fake news stories.

Clearly, the spectre of fake news being shared across Facebook and Twitter from less-than-reputable web domains is a concerning one and most of us are guilty of playing a role in this cycle. The prevalence of fake news has also been used by traditional news sources like The New York Times and Washington Post to highlight the social value that well-researched and vetted journalism provides, even if that journalism comes at a personal cost to the consumer. As former Prime Minister Kim Campbell has argued in The Globe and Mail, “preserving our sources of reliable information should be our mission as citizens and leaders.”

But as important as first-rate journalism is to the health of democratic society, so are multiple disciplines within the academy. Specifically, the work of historians offers much of value in terms of textual analysis, a critical eye to how sources are created, preserved, and hierarchized, and a wider context that tends to complicate societal ‘common senses’ that underwrite much of our current fake news climate. Indeed, since Trump’s win many have argued that history and related scholarly disciplines are core tools to preserve the sanctity of truth within education and mass media. And while historians need not pat themselves on the back too vigorously, the role we can play in providing viable information—even without definitive answers—is a vindication of the humanities in our times.

But perhaps the greater role historians can play in this moment revolves less in our ability to quash fake news through our supposed mastery of archival research, and more in the contextualization of the very idea of fake news. Simply put, fake news in its 2017 iteration poses some unique challenges, but should in no way be treated as an unprecedented phenomenon. As a piece in the New Yorker—a source claiming that it is “fighting fake stories with real ones”—has noted, the existence of fake news has a sustained history. This is where our work as historians has its greatest importance: in our various temporal, thematic, and geographic sub-disciplines, we can all offer a sense of how the media of the day often purposefully warped the truth in the search of ideological or financial objectives. We can illuminate how fraudulent stories were used not simply to win elections or sell papers, but to promote war, trumpet state propaganda, mislead consumers, and justify systems of colonialism and oppression.

And while I don’t believe historians need take a nihilistic approach to this issue by stating in glib terms that ‘all news is fake,’ there is certainly a value in historical criticism challenging the idea that ‘reputable sources’ like those mentioned above are the arbiters of truth, rationality, and impartiality within our media landscape. Indeed, those sources have their own financial and ideological motivations that—even if subconsciously—could lead to news limited in its ability to represent the multi-dimensional nature of truth. And while this obviously isn’t fake news in the ‘Obama is a Kenyan Muslim’ vein, we must show how officialdom’s objectives and perspectives cannot be the saviour from our current predicament, especially if those sources in aggregate represent interests that are dominant and homogenous in social and economic terms.

Ultimately, Historians have a chief role to play in helping people better question where there news comes from, and how to verify and interpret that news. This can certainly chip away at the blatant fake news that has helped define 2017, but it also asks of society tough questions about how the media more broadly represents the truth, especially when it clashes with its interests. It should likewise implore historians themselves to explore the structural and intellectual biases that perpetuate certain practices within the discipline, regardless of truth. After all, Fake History is by no means a non-issue, and the politics of what gets to be venerated as historically-meaningful is rife with biases and structural power imbalances.

In fighting the modern incarnation of fake news, historians need not venerate the grand old papers and networks, but rather hold all sources of public debate and inquiry to a higher standard. As Thomas Peace noted in Active History late last year:

If we are looking for the roots of our present-day political crises, fake news is certainly part of the problem, but we need to take an equally critical lens to the real news and the politicians, civil servants, and opinion makers that mislead the public through their conceptions of history and uses for the past. What we need in Canada – and more globally – is not just an assault on the so-called “fake news” but rather a return to critical analysis in the media and a better understanding of the work of the historian.

Christo Aivalis is a SSHRC Postdoctoral Fellow in the Department of History at the University of Toronto. His dissertation examined Pierre Trudeau’s relationship with organized labour and the CCF-NDP, and is being published with UBC Press in early 2018. His work has appeared in the Canadian Historical Review, Labour/le Travail, This Magazine Our Times Magazine, Ricochet, and Canadian Dimension. He has also served as a contributor to the Canadian Press, Toronto Star, CTV and CBC. His current project is a biography of Canadian labour leader A.R. Mosher.