On Friday, 23 June 2016, Britain voted to leave the European Union, with 51.89% in favour of leaving and 48.11% in favour of remaining.  And thus Britain embarked on what was certainly the most important political decision of the past forty years (going back to the 1975 referendum which approved membership in what was then called the European Economic Community by 67.2% to 32.7%) and just as certainly the most complicated political, economic and legal course taken by the nation since the Second World War.

There is a certain weary tone to British political commentators that one can discern with each passing week: “do we have to talk about Brexit this week?”  And, of course, they do, as they will be doing from now until 29 March 2019 (when the negotiation period formally ends) and well beyond.  The period of political and legal adjustment for Brexit is estimated to stretch into the next decade, and the economic cost will measure out even longer. 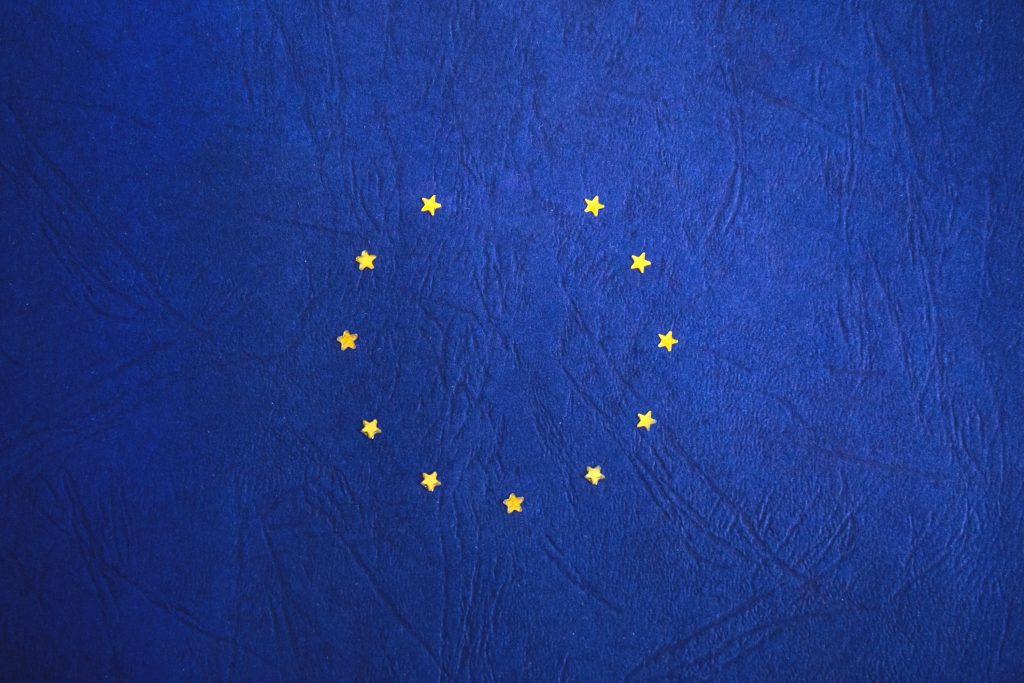 The European Union Flag, missing one star for the UK

Before thinking about the relationship between history and Brexit, it’s worth remembering why the referendum even happened.  Given the scale of the decision, the immediate justification for the referendum seems criminally capricious at best.  In 2013, facing a Conservative Party that had long tortured itself with membership of the EU, often to the indifference of the general public, and with a threat from the right emerging from the United Kingdom Independence Party (a party led by a someone who was, coincidentally, a member of the European Parliament), the hapless Conservative Prime Minister David Cameron committed to an ‘in-out’ referendum on EU membership.  To be clear: it is likely in 2013 that no one outside the Conservative Party particularly cared about a referendum.

Setting aside the short-term context for Brexit, the 2016 referendum nonetheless evokes a broader vista of historical meaning.  But it does so in a deeply ambiguous way.  Brexit is, in many ways, about the powerful pull of Britain’s historical experience and, at the same time, an unsettling example of the misuses and misunderstandings of history.

One way of thinking about this, for example, is reflecting upon two historical reference points.

The first is 1945, the end of the Second World War.  Britain emerged from the war as a victor, but a much diminished one.  Within three years, it was forced to initiate a long process of decolonization.  It was also deeply in debt to the United States.  Britain soon fell behind the Americans in a new world order of global power based upon nuclear weapons and competitive globalization, neither of which it could really afford.   So, victory in war actually clouded the reality of a declining relevance in the world.  The ‘splendid isolation’ Britain had enjoyed in the nineteenth century now seemed an unattainable luxury.

But the war distorted this reality in a particular way.  To many Britons, the critical phase of the war had been the period between the defeat at Dunkirk in 1940 and the desert victory at El Alamein in 1942.  In the eighteen months between Dunkirk and America’s entry into the war, the British struggle had been one of national survival, the victories of which were the Battle of Britain and the Blitz.  Underpinning the myth of that struggle was that it was fought alone: the famous David Low cartoon has a British Tommy standing on the coast of England shaking his fist at enemy planes overhead and proclaiming, ‘Very Well, Alone’.  This myth of course elides the many contributions made by the members of Britain’s global empire.  As the novelist Nicholas Shakespeare has recently commented, it is notable in an era of Brexit that contemporary films like Darkest Hour (2017) and Dunkirk (2017) so powerfully memorialize a moment of British isolation.  Victory in 1945 was, of course, partly rooted in surviving the national crisis of 1940, but it was also built upon a multinational alliance with the United States and the Soviet Union and a multiracial empire based in North America, Africa and South Asia.

But the other ambiguity of 1945 is a product of Britain being among the victors of the Second World War, albeit in reduced circumstances.  Unlike almost every other country in Europe, Britain never really understood the emotional need for a united Europe that would not simply facilitate the movement of people and capital, but actually help avoid a Third World War.  In the midst of the political crisis that followed the fall of France in 1940 and brought Winston Churchill to power, one parliamentarian was urged to ‘Speak for England’.  Because of Britain’s historical experience and its historical amnesia, no one during the 2016 referendum campaign could ‘speak for Europe’ in the way other Europeans could see the project of the European Union: as something that served as a bulwark against the devastation of war.

The second historical reference point is 1979, the electoral victory of Margaret Thatcher’s Conservative Party.  Between 1979 and 1990, Thatcher presided over the construction of a new political culture in Britain, one that sharply broke with the social democratic consensus that had shaped the country since 1945.  The ascent of neoliberalism after 1979 saw the deregulation of finance, the evisceration of local democracy, and the restriction of government spending, not only in social welfare, but also in government aid to industry which led to the devastation of the manufacturing sector.  The New Labour administrations of Tony Blair and Gordon Brown may have tried to address the problems of the poverty caused by this change between 1997 and 2015, but they largely went along with a vision of global neoliberalism and the dominance of the market.  The legacy of this change has been dramatic.  The south-east of England, and particularly London, have become spectacularly wealthy on the spoils of finance and global markets.  Indeed, a cipher for this change is the Docklands of East London. Once an area that drove London’s economy with trade and manufacturing and employed tens of thousands of working-class people, it is now dominated by the steel and glass temples of finance.

Who has lost since 1979?  The former industrial heartlands, mostly in the north and west.  Manufacturing workers.   Public sector workers.   It is completely unsurprising that the Leave vote in 2016 was strongest in those areas that felt that globalization and neoliberalism had done nothing for them, that there was nothing to lose in ditching connections to Europe, and that revenge upon all the discontents of the neoliberal world was best served by putting two fingers up to the cosmopolitan, Remain-loving metropolises like London and Manchester.  In a brilliant essay on Brexit, Zadie Smith remarks that “the notable feature of neoliberalism is that it feels like you can do nothing to change it, but this vote offered up the rare prize of causing a chaotic rupture in a system that more usually steamrolls all in its path”.

But, as Smith also acknowledges, what is striking about the campaign and its aftermath was the “casual racism that seems to have been unleashed”.  Brexit may have been fueled by the ascent of neoliberalism and globalization, but it was also an interpretation of such change that relied upon the image of the migrant and the outsider.

Immigration was the most powerful and raw touchstone during and after the campaign.  For many people in 2016, taking back control from Europe meant one thing: taking back control over migration.  In the early 2000s, the Labour government decided not to impose transitional controls on migrants from new European Union members in Eastern Europe.  The number of those consequently entering the United Kingdom was well above what was predicted.  By 2008, migration was becoming the main political issue on the doorstep, an issue complicated by the increasing number of asylum seekers. Worries were rampant that jobs, welfare resources, housing, and education were all being monopolized by ‘outsiders’.  The problem here is that there has never been any compelling empirical evidence that any of this is true.  To be sure, state resources are under great stress, particularly in the National Health Service.  But this development doesn’t have its roots in the EU or in migrants, but rather in 1979 and cuts in state funding.  Besides, the British economy needs migrant workers.  One of the ironies of a post-Brexit Britain is that the strawberries and cream that are such a clichéd English ritual of that even more clichéd English ritual, Wimbledon, may well be even more expensive because strawberry producers are increasingly unable to attract migrant workers for the harvest.

What the anxieties over migration perhaps really represent is how the historical development of a globalized economy gets read on the ground.  A recent survey of London’s East End (The New East End, Profile Books, 2009, by Kate Gavron, Geoff Dench and Michael Young) has argued, for example, that many of the frustrations working-class people in that area had – over unemployment, social services and housing – many of which were triggered or worsened by post-1979 political change – were often reduced to a resentment of migrants or ethnic minorities, even if those migrants and ethnic minorities had nothing to do with the scarcity of jobs, services, or housing.  In this way, Brexit is the confused reaction to a confusing world.

It is with confusion that I would end this post.  There is, first of all, the immediate confusion.  What Britain wants out of Europe, either before or after Brexit, is an exercise in confusion.   As the prime minister of Luxembourg, Xavier Bettel, quipped: “before they were in with a lot of opt-outs; now they are out with a lot of opt-ins”.  On the day I wrote this post – 19 March 2018 – the framework of a transitional deal seems to have been agreed, but with what were called “unimaginable concessions” from the British side on questions such as Northern Ireland and a staggering £40 billion “divorce bill”.  The Conservative party that began this whole process seems, at present, unconvinced by what it has gained and as unhappy leaving Europe as they were staying in.  The opposition Labour Party is holding itself in a stance of ‘creative’ or ‘constructive’ ‘ambiguity’ on Brexit, caught between its working-class voting base that is perceived as dominantly Leave and its party members that are overwhelming Remain.  One might also point to the short-term historical amnesia afflicting many politicians and newspapers in Britain, the claim that Brexit was an overwhelming mandate for change.  It was not.  The difference between Leave and Remain was a margin of 3.78%.

But the confusion is, of course, not just immediate.  Brexit is, at its most basic, about a confusion of identity that has dogged Britain and England, in particular, since the Second World War.  Britain has never been able to answer the question ‘who are we?’ or ‘what are we?’ with much confidence in the twentieth century.  Brexit is a product of that.  It is telling that Scotland, with a much more confident sense of itself in national terms, is also much more comfortable with Europe than England.   After the 2016 vote, there were a disturbing number of reports of ethnic minority Britons or Europeans being told to “go back to where you came from”.   But this taunt should be turned inward, as well.  Where is it, or what world is it, that Britons want to go back to?  There is the delusion that Brexit will lead to a Britain without the complexities of globalization or larger, more complex communities, that ‘Little England’ can be resurrected, and that the identity of Britain and England can be made certain and fixed.  As any historian knows, there never was such a world.

Stephen Brooke is a history professor at York University, Toronto.

One thought on “Brexit Ambiguities”