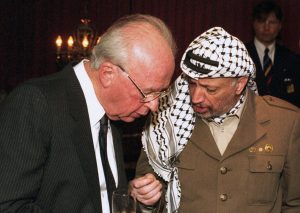 The Oslo Diaries has is Canadian Premiere during Hot Docs in Toronto. The first screening will be Tuesday May 1 at 9pm at TIFF Bell Lightbox 1, with a second on Wednesday May 2 at 12:30pm at the Isabel Bader Theatre.

In the early 1990s, increasing violence and bloodshed continued to deteriorate the already tense relations between the Israelis and Palestinians. Officially, neither side recognized the other’s leadership as legitimate – the Israeli government classified the Palestine Liberation Organization (PLO) as a terrorist organization while the PLO did not recognize the State of Israel. In that environment, each side demonized the other, creating an atmosphere where distrust and suspicion compromised any efforts towards peace.

In 1992, however, negotiators from each side secretly met in Oslo, Norway. These meetings, which had to be secret as it was illegal to be speaking to each other, changed the Middle East. Chronicled only by the negotiators’ diaries, they opened the process that ultimately led to Oslo Accords, a series of agreements between the two sides.

These meetings and the efforts to implement the Oslo Accords are the subject of the new documentary The Oslo Diaries. The film combines the written record from negotiators on both side with re-creations of the meetings to take the viewer behind-the-scenes of an incredibly  contentious, yet hopeful, moment in Israeli-Palestinian relations.

The film also uses interviews with key players in the story, including the last on camera conversation with former Israel president Shimon Peres. Moving seamlessly between archival footage, re-creations, and contemporary interviews, the film immerses the viewer in a story that is simultaneously about the past and the future.

With the relationship between the two sides continuing to deteriorate, the film speaks to modern concerns just as much as it does about the 1990s. In documenting the highs and lows of the negotiations, The Oslo Diaries poignantly demonstrates the fragility of peace and the high cost of failing to preserve that peace.

In this episode of the History Slam, I talk with Daniel Sivan, one of the film’s directors. We talk about the history of Israeli-Palestinian relations, the motivation to make the film, and the use of re-creations. We also talk about the Oslo accords, de-humanization in conflict, and the region’s future prospects for peace.

Sean Graham is an editor at Activehistory.ca and host/producer of the History Slam Podcast.