This post is part of a series, a virtual tour of the Depression-era Soviet Union, in part through the eyes of Canadians who traveled there and, in part, through Kirk Niergarth’s eyes as he attempted to retrace some of their steps during a trip to Russia in 2014. The previous installment is available here.

What do you pack for a visit to the Soviet Union in the 1930s? There is the luggage to be inspected at the border, the hard currency to be declared, but there is other, invisible baggage, too (and I am not referring to something clandestine, like the revolver that Saskatchewan farmer George Williams managed to sneak through customs in 1931). The baggage carried in our minds plays a defining role in shaping the Soviet experience, even if it is never unpacked. What we know or think we know about the USSR shapes what we see there, just as it did for Canadians in the 1930s.

For example, in the 1930s, Canadian Communists knew before they ever left Canada that socialism had triumphed in the Soviet Union and they were eager to observe the fruits of victory. As the German train he was on in 1932, crossed the Soviet border, “tears of joy” streamed down prominent-Communist Party of Canada member, the Rev. A. E. Smith’s face. He was overwhelmed with the realization that he would finally have the opportunity to see the “Land of Socialism.” For Young Communist Dave Kashtan, it was the banner at the border reading “Workers of the World Unite,” that convinced him he had arrived at a country that “shared his hopes.” 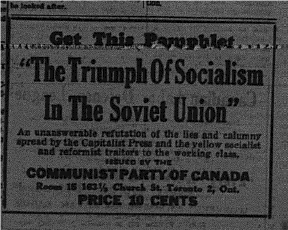 These hopes prepared Canadian Communists to observe the USSR in “particular, mediated ways” that amounted, in Lisa Kirschenbaum’s phrase, to a “communist way of seeing: measuring the bright Soviet future against both the backward Russian past and the grim capitalist present.” The USSR, Kirshenbaum continues, “could be ‘seen’ in its ‘marvelous’ form only if the true communist heart somehow filtered the raw data captured by the speciously accurate eye.” For Canadian communists “revolutionary truth structured their observational truth.” Or, as Kirschenbaum’s metaphor would have it, “they saw not with their eyes, but with their hearts.”[1]

The opposite was also true: the anti-communist Col. George Drew was convinced more than a year before he himself visited the Soviet Union that sympathetic travelogues were “giving a false and what may conceivably be a very dangerous impression of the Russian experiment.” In between, were uncommitted travelers, most of whom prepared as best they could before their departure. There was no shortage of material for them to read, books about the Soviet Union, sympathetic or critical, were abundant in the interwar years. On the eve of his 1935 departure, Frederick Banting was in the middle of a book on Soviet economics, A. Leontiev’s Political Economy: A Beginner’s Course, which he found “most readable and clever.”

For Banting, as for many other travelers who went by ship from London to Leningrad, a few days on board a Soviet ship provided additional preparation. Soviet films were part of the entertainment, the ship’s captain answered all Banting’s questions about the Kirov assassination. For Graham Spry, a prominent member of the CCF, his time on the ship was “the first lesson in something new.” When the crew referred to the boat as “our own,” Spry thought, it meant something very different than a “similar expression on a CPR, Cunard or other boat.” 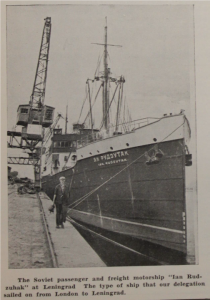 For those who came overland, the journey to Stalin’s Soviet Union often led through Hitler’s Germany and most were appalled by what they saw there, with the exception of George Drew who was impressed with its marvelous efficiency.

At the Soviet border, there was a mandatory change of trains and a customs inspection which was intense in some cases and cursory in others. Few got the kind of reception given the Canadian women trade union delegates who arrived in the summer of 1930. They were serenaded by the Red Army band and each presented with a bouquet of flowers. As one wrote, their hearts were “full of the joy of arriving in a new world where the workers and peasants rule.” 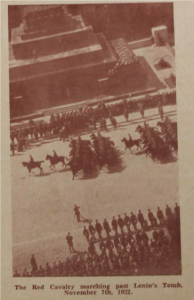 None came to Moscow by air, as I did in May 2014. I saw no Soviet films on the journey. I was anxious about border security because of the then-strained diplomatic relations between Canada and Russia over conflict in the Ukraine, but I entered the country without incident. No one was on hand to give me a bouquet and the Red Army band was apparently elsewhere engaged. As soon as I had checked into my hotel, just like most 1930s Canadians, I made my way straight to Red Square. 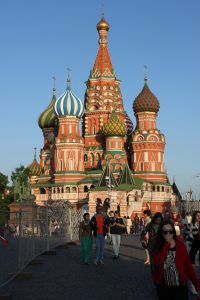 Figure4 St. Basil’s Cathedral on Red Square, taken a few hours after my arrival in Moscow in May 2014

Most interwar Canadian visitors went to Moscow in the summer, some journeys were timed according to the revolutionary calendar, being on hand to witness the celebration of May Day or the anniversary of the Revolution in November. My visit was in May and I was only slightly less enthusiastic than McGill economist Eugene Forsey had been in 1932. He wrote: “We began sightseeing of course at the centre of everything, the Red Square. I have never seen anything finer anywhere… a matchless setting for the great gem of the place, Lenin’s tomb. This is without question the finest monument I’ve ever seen, both in itself and in its situation. I can’t imagine anything more dignified and impressive.”

Like Forsey, I eventually entered Lenin’s tomb. Unlike in his time, there was no special line for foreign tourists to help them avoid extensive queues. Saskatchewan farmer George Williams was very pleased with the police officer who directed him to this much shorter line in 1931. The officer was a Jew, Williams noted, indicating “national prejudices have been forgotten in Russia.”

Forsey found that nothing in Moscow contradicted his positive first impression. “Moscow is full of life,” he wrote home to his mother, “not only in the physical sense but also in the ‘spiritual.’ The streets are crowded with motors, trains, pedestrians. Everything is moving. This is true of all parts of the city that we saw and we rambled over most of it as freely as you could ramble over London. It would be absolutely impossible for the govt. to fake a happy population of four millions or so for the unwary foreigner.” Five years later, in 1937, the novelist Hugh Maclennan was similarly impressed: “We arrived in Moscow today and it is like what an American boom city must have been like sometime before 1900 – except that it is better, for everything possible is being done for the young. The city and its people burst with self-confidence and a sense of achievement… It is a profoundly enlightening experience to be in Russia now. One learns more in two days here than in two years of reading books.”

Jack Cowan of Toronto had only been in Moscow a few hours when he wrote a dispatch home for the magazine Soviet Russia Today: “The red square itself is a blaze of colour and slogans and tomorrow it will be roped off, but we will be on the reviewing stand beside the leading comrades. All this is very impressive of course but I realize that it is a special show. What is a thousand times more impressive is the living reality of everything we ever believed about our Soviet Fatherland. I never felt so feeble in my attempts at describing anything. It is true, it is true, it is true, keeps running through my mind.” 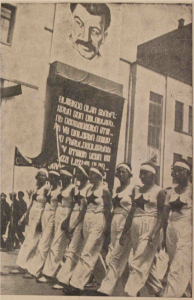 Certainly, not all Canadian visitors saw the USSR as Cowan did as a fatherland, but many did witness parades or performances on Red Square. Banting estimated there were 150,000 marchers in the procession he saw. They “sing magnificently,” he wrote. “It was stupendous. It is a parade for themselves.” King Gordon, then professor of Christian ethics at the Union Theological Seminary in Montreal, saw Stalin “smiling as he walked away from the tribune with Maxim Gorky. He has just been reviewing 120 000 of the youth of Moscow… Without a doubt it is the greatest spectacle I have ever witnessed. Strong bronzed healthy boys, girls, young men and young women…they walked past in their athletic shorts and shirts as splendid a crowd in physical appearance as one could find anywhere.”

While they were in the USSR, Canadian visitors often wrote prolifically in letters home or journals. Another Montreal professor, Frank Scott’s travel diary runs to 16,000 words and he is not particularly exceptional. True to the 21st century, I captured my impressions in digital video. Like the Canadian interwar visitors who would turn their Soviet photographs into lantern slides and use them to illustrate public talks (often lecture tours following a Soviet visit were longer and with more numerous stops than the visit itself), I edited some of these videos into short, amateur films which I have inflicted upon audiences of Calgary university students, public library patrons, and, now, in this sentence, on the readers of ActiveHistory.ca. The first captures my experience of Red Square and Lenin’s tomb:

Kirk Niergarth is Professor of History at Mount Royal University.