The crisis consists precisely in the fact that the old is dying and the new cannot be born; in this interregnum a great variety of morbid symptoms appear. ~Antonio Gramsci

Over the last generation, a series of “post” and “neo” ideologies prophesied fundamental change already evolving around us: a new era was being born.

This has not really happened and the diverse manifestos that foretold historic change stand as testimony to unrealized aspirations. Nowhere, perhaps, is this more evident than with regard to new communications technologies (NCTs), social media broadly construed, or the internet. At their most extreme, the internet’s advocates promised a revolution in communications, subjectivity, and politics. As Heather Brooks noted in The Revolution Will be Digitized:

“Technology is breaking down traditional social barriers of status, class, power, wealth and geography, replacing them with an ethos of collaboration and transparency”

On an international level, the Arab Spring was its key manifestation. Closer to home, the Maple Spring, student protests, culture jamming, and Occupy were taken as illustrations of NCT’s political potential. Yet, as Andrea Nagle’s Kill All Normies: Online Culture Wars form 4Chan and Tumblr to Trump and the Alt-Right argues to persuasive effect, NCT’s dark side lies in their connection to the alt-right and the most reactionary social movements in contemporary history.

This is one of a series of important questions in contemporary history that should be explored as part of a broader engagement with the recent past. Others might include millennial stereotyping, the rise of the “gig economy,” a consideration of actually existing globalization, Canadian imperialism, among others.

This post is the first in a series that explores issues in contemporary history. In this series I want to ask how we think about, teach about, and narrate contemporary history, which is a significant part of my job. My larger aim is to open a conversation about how historians and historical research contributes to a consideration of contemporary issues. What does history contribute to a consideration of recent history and contemporary issues that is missed by other types of commentary? For this post, I will use Nagle’s text as a model of how we can think about the historical role and importance of the internet and the rise of the alt-right. 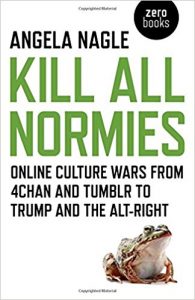 Kill All Normies is an important text because it elides simplistic narratives about the  political effects of internet. Political studies of NCTs are now into their second generation, which is far more cautious than earlier pronouncements that tended to see in it the potential for radical democracy. Instead, more recent studies look at both the limits and potential of NCTs for political activism and communication to suggest that they can likely never become a panacea for the problems of public life.

Nagle adds an historical perspective to this view by setting it into the midst of the “culture wars” in the United States and other Western countries. Her goal is to re-map the culture wars as a period of intense political and ideological struggle “that formed the political sensibilities of a generation.” (9) Anonymous, wikileaks, and Occupy formed the far activist edge of progressive internet politics as it tried to organize “a new leaderless form of digital revolution.” Equally significant, however, was what Nagle calls the “Tumblr-liberalism” that formed the basis of an often campus-based call-out culture that ended up, she contends, producing ironic results.

An historical perspective is particularly important for a re-mapping of the culture wars because we are deeply embedded in it, and its legacy, today. Nagle has a clear perspective on the culture wars, but that perspective is not to argue the validity of one side or to defend its politics. Instead, what she seeks to do is connect the effects of the internet – as a political space, culture, and an aesthetic – to broader historical processes and ideological currents. This allows her to chart the dark dynamics of extremist, masculinist, and racist internet communities.

In this sense, an historical perspective encourages analysis of internet politics as part of a broader narrative, with ideological connections to diverse currents of thought. It allows Nagle to avoid becoming a protagonist in the very history she seeks to relate. Her re-mapping allows her to chart a narrative from early cyber utopianism to the election of Trump.

Nagle’s narrative is built on irony, and the rise of these alt-right online communities is one of the ironies to which she points. The alt-right emerges, in part, as a response to an internet call-out culture, adopting similar tactics, but with more extreme, violent dynamics. The alt-right is not, it should be noted, a single cohesive movement or political perspective. It involves a range of groups that interact with each other but who, on the surface at least, seem to have little in common. It includes everything from woman-hating male celibacy advocates, intensely sexualized libertines, “Return of Kings” “Alpha Males,” virulent racists recycling anti-Jewish conspiracy theories, white nationalists, and radical libertarians who view the state, in almost any form, as an intrusion on their personal freedom. Each of these groups, however, was helped and affected by a range of factors connected to the evolution of cyberspace, including:

The result, as we know, is not only that the alt-right challenged progressive politics, but has led to a bizarre re-cording of conservatism as well. The Internet did not make the alt-right but it was instrumental as a space through which alt-right, its tactics, its organizational capacity, and its aesthetics evolved.

This did not happen overnight. Indeed, it is part of a longer story in media, cultural, and political history that, I strongly suspect, needs to be connected to the challenging realities of the globalized economy. Nagle shows us how we can write an intellectual history of the internet by treating it seriously as a space of political and cultural organization. This is a point implicit in Nagle’s argument, if you believe that Trump’s victory was simply a product of a dysfunctional electoral college and white working-class insecurity, you are missing an important part of the narrative of contemporary history.

For me, this is the larger point. How do we write or teach contemporary history in a way that treats the internet seriously but which also avoids the well-known pitfalls of reductionist thinking? Seeing its organizational capacity is one way and mapping how this potential became part and parcel of the tactics of the alt-right is another. One might agree or disagree with this particular plotline. Fair enough: constructive criticism is also part of historical discourse. But, whatever narrative we adopt for contemporary history, we will have to find a way to treat the internet in a complex and non-reductionist way.

2 thoughts on “The Ironies of the Wired Society: The Internet and Contemporary History”