This is the first in a five part series featuring the Lost Stories Project.

In mid-June 2017, I received a phone call from a senior official in the New Brunswick Department of Tourism, Heritage and Culture. He wanted to talk with me in regard to the Lost Stories Project that I direct. We seek out little-known stories from the Canadian past, hand them over to artists to create works of public art, and document the process by way of short documentary films. The project was designed, in part, to show what happens when stories about the past are told in public space. When we see a piece of public art making reference to the past, it appears as if it couldn’t have told any other story, taken on any other form, or been located in any other location. The Lost Stories Project offers an opportunity to show that the process was far from straightforward since there are invariably numerous interests that need to be heard and challenges that had not been expected.

During 2017, with Canada 150 funding from the federal government, we created four new episodes from across the country, selecting from nearly 200 stories that were brought to us following a call to the public. While subsequent Active History posts this week will explore other episodes, my phone call was pertinent to one that I led, which told the story of individuals — mostly Acadians — who contracted leprosy and were in the 1840s confined to Sheldrake Island, near the mouth of New Brunswick’s Miramichi River; and until that phone call, everything connected with this particular episode had gone according to plan. 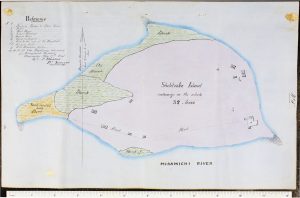 The story came to us from the Sheldrake Commemorative Committee which had been working for a number of years to provide some public recognition for the fifteen people who died on Sheldrake Island, enduring terrible conditions before the survivors were evacuated. They were sent to Tracadie, in the Acadian Peninsula, where a proper lazaretto was established, which went on to treat people with leprosy until its closure in 1965. Today, there are cemeteries in Tracadie, both to patients who died at the lazaretto and to the Sisters, members of the Congrégation des Religieuses Hospitalières de St-Joseph, who attended to the ill; and there is a museum which focuses on the history of the Tracadie lazaretto. However, in contrast with the strong public memory in the region of what happened subsequent to the Sheldrake Island tragedy, the episode on the island had become “lost.”

This story immediately drew me in since my own research has over the past decade touched on questions of the forced movement of Acadians, looking first at the memory of the Acadian deportation of the mid-eighteenth century and more recently the expulsion of individuals — mostly Acadians — to create Kouchibouguac National Park in New Brunswick in the late 1960s and early 1970s. The transport — often with the threat of violence — of people with leprosy to Sheldrake Island was yet another example of forced removal, but this connection to my own interests wouldn’t have mattered if there hadn’t been an active community group eager to tell this story, with which we could collaborate.

In order to interpret the story, we selected the New Brunswick-based artist Marika Drolet-Ferguson. Her practice is deeply grounded in the use of photography, and her plan was to take photographs of the island at different times of the year, to evoke elements of the difficult environment with which the people with leprosy had to contend. She ultimately selected fifteen photographs (one for each person who died on Sheldrake Island) that would be mounted on short plinths and installed on a site — owned by the church of St Peter’s and St Paul’s, in Bartibog, New Brunswick — from which the island can be seen. It was important for us to have a site with meaning to the story, and the Sheldrake Committee was confident that there would be no problem in installing Marika’s installation there. By the time I received that phone call mentioned at the start, she had already laid out a path along which the photographs would be displayed, anticipating that the inauguration would take place on July 19, the date on which those with leprosy were first sent to Sheldrake Island in 1844. 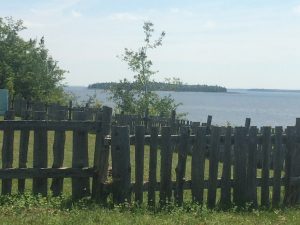 We had both a site and an inauguration date with meaning, but this all fell apart when — only weeks before the installation — we were informed (by telephone) that provincial archaeologists had concluded that our site contained artifacts connected with a Mi’kmaw encampment which had previously been unknown. So we had managed to “find” two lost stories. Since the site could not be disturbed without appropriate consultation with the pertinent Indigenous interests, this discovery scuttled our location, as well as plans to inaugurate the artwork on the date of the anniversary. In the end, however, the determination of our partners in the region saved the day. The Sheldrake Commemorative Committee secured a site in Tracadie — where the Sheldrake Island survivors had been evacuated — that bordered upon other sites of memory that told the story of leprosy in the region. And if we didn’t inaugurate the artwork on the anniversary of the arrival of the first patients on Sheldrake Island, we managed to do it close to the anniversary of when the last people were removed in 1849. 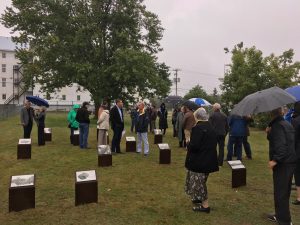 Anyone who visits Tracadie and comes across Marika Drolet-Ferguson’s installation might think that it had been installed on the site where it had to be located, but of course that was not the case, a matter that is discussed — briefly — in Julien Cadieux’s documentary film, Sheldrake. His film beautifully tells the story of the individuals with leprosy, as well as the process of turning that story into a physical object. I would have liked that this unforeseen shifting of commemorative site had been given more attention, but it was Julien’s film, and we were sharing authority, to use the expression popular among public historians. In the end, it is far too easy to assume that such exercises in public memory had to unfold as they did, but in fact there are usually contingencies that cannot always be anticipated, and which cannot always be perceived by visitors. This particular episode underscored how doing history in the public sphere is fundamentally messy.

One thought on “Public History is Messy”