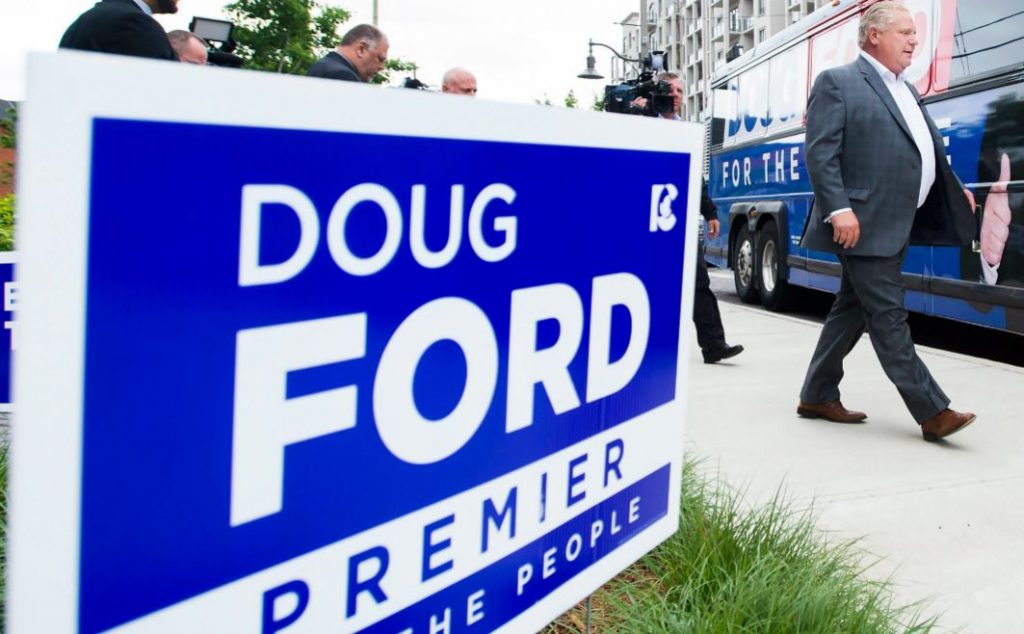 Ontario – wake up and sniff the kitty litter. Doug Ford aka DoFo, is premier-elect of Canada’s most populous province. That will make DoFo arguably the second most powerful politician in the country after Prime Minister Justin Trudeau. There can be no denying the political accomplishment and screaming yelp for CHANGE this proclaims. Doug Ford, elder brother of the late drug-addled, scandal-ridden and infamously world-renowned Toronto mayor Rob Ford, took Ontario in a resounding way and will lead a majority Progressive Conservative government. He obliterated 15 years of Liberal rule in the province and left the New Democratic Party (NDP), which will become the official opposition in his wake, as he racked up a significant majority. In the end, it was a PC landslide.

How did we get here? DoFo took over from disgraced PC leader Patrick Brown who resigned earlier this year. Ford then soundly defeated credible opponents for the party leadership. DoFo then skilfully recruited the vanquished Christine Elliott and Caroline Mulroney to work effectively at his side in the provincial election which began almost immediately following the PC leadership race. Ford survived a mid-campaign dip in the polls and sensational late breaking news of a law suit brought against him by his brother’s widow. None of that mattered– somehow DoFo tapped the secret sauce of Ontario political success.

WTF?  Here are a few observations that will hopefully provide useful context.

To begin, few things unite Canadians more than a tendency to affect moral superiority over Americans. Canada considered as a peacekeeper unlike its bellicose neighbour despite having largely abandoned the pursuit for decades. Canada seen as a greener kind of place despite a Trudeau government dedicated to completing two pipelines carrying bitumen to tidewater. And, above all, Canada seen as home to a gentler, more sensible form of politics than that practised by those darn Yankees led by an ogre known as Trump. (Canadians of progressive leanings generally refer to the occupant of the White House by his last name alone, spoken as if an epithet.)

That said, welcome to the political reality of Ontario in 2018. DoFo openly admires American President Donald Trump. Like Trump, he rode a wave of conservative populism to power. As campaigner he exhibited some of the same tendencies that many Canadians decry when they see evidence of same in America. Doug Ford, like his late brother, is a big man physically, with a propensity for goading so-called elites and baiting journalists. Many Canadians would like to believe such discourse could only succeed in the USA. Glass houses.

However, one must note shades of political character that emerged in DoFo’s back-to-back winning campaigns in the leadership contest and recent election. Doug Ford’s lathered critics might do well to observe the character that emerged. He stayed on message with extreme discipline. In the election debates, he refused to be baited by his principal opponents, outgoing Liberal premiere Kathleen Wynnne and social democrat Andrea Horwath of the provincial NDP. While DoFo, the community college dropout cum businessman turned politician, is hardly eloquent, he was succinct and calm and sometimes explicitly gracious to his opponents. To send a signal that he was not just another strong man on an ego trip, DoFo kept Elliot and Mulroney around for regular photo ops throughout the campaign. He showed political resoluteness when he ruthlessly axed the electoral campaign of social conservative leadership rival Tanya Granic Allen after she was exposed as a hater in old social media posts. In sum, as provincial election campaigner, Ford sometimes presented a sharp contrast from the once publicly belligerent right hand man and defender-in-chief of his embattled late brother.

The question now is which DoFo emerges as premier? The social conservative who pledges to reverse provincial sex education norms and stands firm against safe injection sites at the time of a provincial opioid crisis? Will his campaign promises of “efficiencies” result in cuts that will cripple social and environmental programmes, or will he practice more prudent, less costly public administration?

Will he hark back to successful PC provincial regimes of the past led by the likes of the highly successful John Robarts and Bill Davis in the 1960s and 70s? Davis’s famous slogan was, “bland works.” He was the master of a calming centrist conservative approach that worked for the party for decades.

The other PC path to political success is that of former premier Mike Harris, who won two majority governments from 1995 to 2002. Harris, while not an entirely obnoxious public brute, was often scathing about his opponents and claimed that his brand of northern Ontario common sense politics was more in step with public values than the academic and media elites of Toronto presumed. That more truculent posture worked for Harris and it worked again in the just concluded campaign for DoFo.

Will the coming weeks and months reveal the projection of the more steady, firm, almost avuncular campaign posture adopted by DoFo, or will he hark back the confrontational, uncivil patterns of his brother’s mayoralty? Will it be more Bill Davis, or more Mike Harris?

Ford’s opponents, some of whom cannot contain their horror about the election result, love to compare him to Trump. As noted, there are some similarities, but as Daniel Dale, Washington correspondent of the Toronto Star pointed out at a recent conference of journalists, there are significant and telling political differences between the two. One can hardly claim that Ford’s victory is the revenge of angry white men. Like his brother who built “Ford Nation” in the diverse Toronto suburbs, DoFo appeals to significant numbers of people in highly multiethnic suburban communities in southern Ontario. They drive the cars on which Ontario industry and suburban lifestyles depend, they are socially conservative, and they don’t want environmentalism and progressive social policy rammed down their throats. Ford opposed carbon emission control policies proposed by the outgoing Wynne government and he promised a ten cent per litre reduction in gas prices.

Rob Ford famously (if fatuously) declared that ‘the war on the car is over.’ His brother’s victory is likely to be bad news for Ontario environmentalists. Voters who feel they are over-taxed by interfering governments have found their new champion in car choked and car dependent southern Ontario. As DoFo angrily, but accurately, pointed out, it is easier to be an environmentalist and public transportation advocate living near a subway stop in Toronto than as a resident of a far flung suburb of the GTA (Greater Toronto Area) who has no way to get about other than a car because of decades of under-investment in public transportation.

The Globe And Mail reported that Doug Ford dealt hashish as a teenager in suburban Etobicoke in western Toronto, allegations that Ford has denied. Given such stories and the recent lawsuit launched by Renata Ford which claims that DoFo mismanaged the family company and squandered Rob’s estate, we can expect further exploration of Ford family members’ rich past and extravagant character. Ford denies Renata’s claims which have not been proven in court. But will it even hurt Doug Ford? That narrative might be the jet fuel of an expanding Ford Nation – just more evidence of the elites ganging up on good old DoFo. And hey, what’s so bad about a past as a hashish entrepreneur in a province where the provincial government will be dealing dope? Canada is slated to soon legalize marijuana with the provinces in charge of distribution. From that perspective Doug Ford’s electoral victory might be perfectly timed.

James Cullingham is a documentary filmmaker, historian and journalist.  His latest film Jim Galloway- A Journey in Jazz will have its world premiere June 28 at the TD Toronto Jazz Festival. Read more at Tamarackproductions.com or find him on Twitter @JamesCullingham.