Two new exhibits were recently opened at the University of Calgary’s Founders’ Gallery in The Military Museums. Gassed Redux is a live recreation of John Singer Sargent’s oil painting Gassed, which depicts victims of a 1918 gas attack on the Western Front.[1] The exhibit was mounted this past June 14th by artist Adad Hannah, and captured for visitors to see at the gallery until this September. This “tableau vivant,” in the words of Curator Lindsey Sharman,[2] is a clear example of art’s capacity to engage the public with the past, and might even be considered a version of active history.

The second exhibit is ÖDE, by artist Sarah Beck, and is the subject of this post by Laura Brandon, historian and former curator at the Canadian War Museum. (ÖDE is pictured here.) 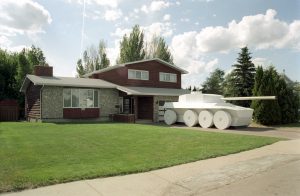 In her post, Brandon is interested in the way that Beck’s ÖDE, while a product of its own times,[3] anticipated contemporary patterns and anxieties about security.  As editors of the “Canada’s First World War” series, we found ourselves interested in how the war can be implicated in Beck’s art. One obvious example is that Beck’s imitation armoured vehicle is a legacy of the development of the tank during the First World War. We can link the piece to another of the war’s legacies: its role in democratizing and politicizing visual art – at least, large-scale, commissioned art. Beck’s medium is different than the oil paintings and carved stone monuments Brandon has written about in her three earlier posts in our series (here, here, and here), but its critical perspective, and interest in the social meaning of elements of war, resonate with the First World War shift in artistic interpretations of war’s significance.

A final observation: Beck’s disruption of the conventional meaning of flat-packed consumerism appeals to us as editors interested in unconventional histories and reflections about Canada and the First World War. If you have something you are interested in sharing, check out our series page here, and get in touch.

Around about the time the ubiquitous Swedish home-furnishings company IKEA arrived in Canada in 1976[4], award-winning Canadian interdisciplinary conceptual artist Sarah Beck was born in Saskatchewan.[5] In 2001, when IKEA began to use its own trains to transport its phenomenally popular products across Europe, tongue-in-cheek, Beck founded a company, ÖDE, which manufactures affordable flat-pack weaponry. Her first product was an environmentally friendly full-size MDF South African Rooikat 105 Armoured Fighting Vehicle.[6] Available in seven seasonal colours, instructions on how to put the Rooikat together with an Allen key accompany it.[7] Numerous glossy photographs in the instruction manual show a happy family constructing the vehicle. One final image shows the replica weapon dominating their driveway. Accompanying text assures readers that this family is now secure. Since this artwork was devised, the term IKEA weaponry—armaments that come in kit form and can be assembled quickly—has entered the lexicon.[8] Ironically, IKEA has also offered flat-pack houses, including the sort of house Beck’s vehicle protects.[9] 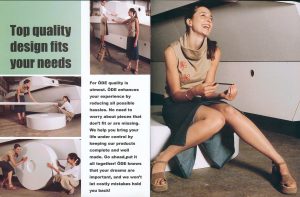 Excerpt from the ÖDE catalogue, by Sarah Beck. Image courtesy of the artist.

If ÖDE exemplifies the consumer context in which Beck’s generation came of age—the era of BILLY bookcases and POÄNG chairs—more remarkable is the year in which she conceived her artwork. ÖDE emerged in the spring of 2001 and Beck exhibited the Rooikat first in Vancouver in August, shortly before the horrific events of 9/11 changed the world forever.[10] In the tragedy’s aftermath, security systems previously associated with prisons, shops, banks, and the military became one of the world’s fastest growing domestic consumer sectors.[11] Rather than armoured vehicles, it was mostly video and other forms of electronic surveillance that government agencies, homeowners, and businesses sought to install but this could not easily have been foretold. For Beck’s generation, televised parades of tanks and weapons of mass destruction were what they knew. Thus before 9/11 it was structures like armoured vehicles that could offer consumers solid protection as the artist demonstrates with ÖDE.

The IKEA effect is another term that ÖDE foretells.[12] This is when consumers place an unrealistic value on something because they have made it themselves. While we may laugh at the presumption that a flat-pack armoured vehicle can meet a family’s security needs with the turn of an Allen key, Beck integrated an early understanding of this bias into her artwork a decade before the phenomenon even had a name.

In difficult times, ÖDE’s ongoing survival has been a subject of concern.  As art, it is not something that easily hangs over any living-room chesterfield, nor would it long survive installation as an outdoor sculpture. Nevertheless, as art, it reminds us forcibly about how much our creators contribute to our understanding of our own times. I hesitate to reference words like prophet or seer, but artworks like ÖDE demonstrate art’s notable capacity to outline the future even before we, its viewers, have the barest inkling of what that future might hold.

The original ÖDE armoured vehicle will be on display in Calgary at The Military Museums until early September.[13] Plans are ongoing to house it permanently in a Calgary public art collection.

[6] The vehicle was developed in the 1970s and has been in use by South African defence forces since 1980. See: Dewald Venter, “Rooikat,” Tank Encyclopedia, published 25 January 2018, online at: http://www.tanks-encyclopedia.com/coldwar/South_Africa/Rooikat.php; “Rooikat 105 Armoured Fighting Vehicle,” Army Technology, https://www.army-technology.com/projects/rooikat/; “Rooikat 105,” Military-Today.com, no date,

[9] For a recent discussion of flat-pack houses and IKEA see: David Morton, “New housing can be affordable and homely if builders learn lessons from the car industry – and IKEA,” 9 January 2018, The Conversation, http://theconversation.com/new-housing-can-be-affordable-and-homely-if-builders-learn-lessons-from-the-car-industry-and-ikea-88099 (accessed 27 June 2018).