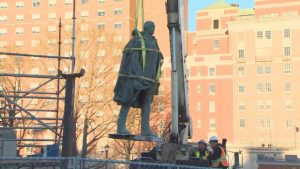 One thought on “What’s In a Monument? Part II: The Edward Cornwallis Monument and Reconciliation”