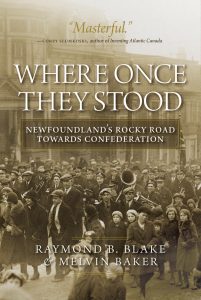 From airport kitchen parties to This Hour Has 22 Minutes to one of the greatest moments in Canadian curling history, Newfoundland and Labrador has become a vital component of Canadian culture. That position wasn’t a given, however, when it joined Confederation in the spring of 1949 after a contentious campaign. As Canada’s youngest province, there are many people still living whose nationality at birth was Newfoundlander and not Canadian, a fact which many hold dear.

The process through which Newfoundland rejected Confederation in the 19th century before joining in the 20th is a unique story where the divide between urban and rural populations and their voting priorities was clearly on display. In both cases, a refrain has emerged that many voters were duped, or didn’t fully comprehend, when casting their ballots. For some historians, these were not people voting in their own best interests, but rather an uneducated group that had been sold a bill of goods.

There are many parallels in how people have written about these people in Newfoundland during the Confederation debates and some members of the electorate today. As part of what seems to be increased tribalism in North American politics, the rush to cast those with whom we disagree as uneducated or foolish is clear when scrolling through Twitter during any election campaign. But what if people aren’t necessarily being fooled, but rather examining the available options are voting in their best interests?

In their new book Where They Once Stood: Newfoundland’s Rock Road Towards Confederation Raymond Blake and Melvin Baker examine the gulf between pro- and anti-Confederation voters in Newfoundland during the process that ultimately led to Canada’s 10th province joining Confederation. By challenging the popular notion that those who voted against Confederation in 1869, and for Confederation in 1948, were gullible and/or uninformed, Blake and Baker have explored a historical issue that not only informs our understanding on Newfoundland and Canadian politics, but also contemporary political discussion.

In this episode of the History Slam, I chat with Raymond Blake about the book. After we briefly reminisce about my time at the University of Regina, we chat about Newfoundland and Labrador rejecting Confederation in 1869, the public reaction, and how the First World War influenced the Dominion’s independence. We then talk about Joey Smallwood and his campaign for Confederation, the economic realities of Newfoundland in the 1940s, and why the narrative of Newfoundlanders being duped into Confederation emerged.