In 1919, Montreal, Canada’s largest city and a major industrial, manufacturing, commercial and financial centre, was considered a stronghold of craft unionism with strong links to the American Federation of Labor (AFL). The Montreal Trades and Labour Council (MTLC) opposed proposals for a general strike in support of workers in Winnipeg during the General Strike, and Montreal workers did not exhibit massive support for alternatives such as the One Big Union (OBU). Nonetheless that this metropolis was the site of most strikes in Quebec and intense militancy in the form of demonstrations, work stoppages, and spontaneous sympathetic crowd actions that reveal that Montreal workers wanted a greater say in industrial and political life. An examination of a long 1919 in Montreal also exposes rifts within its labour movement. 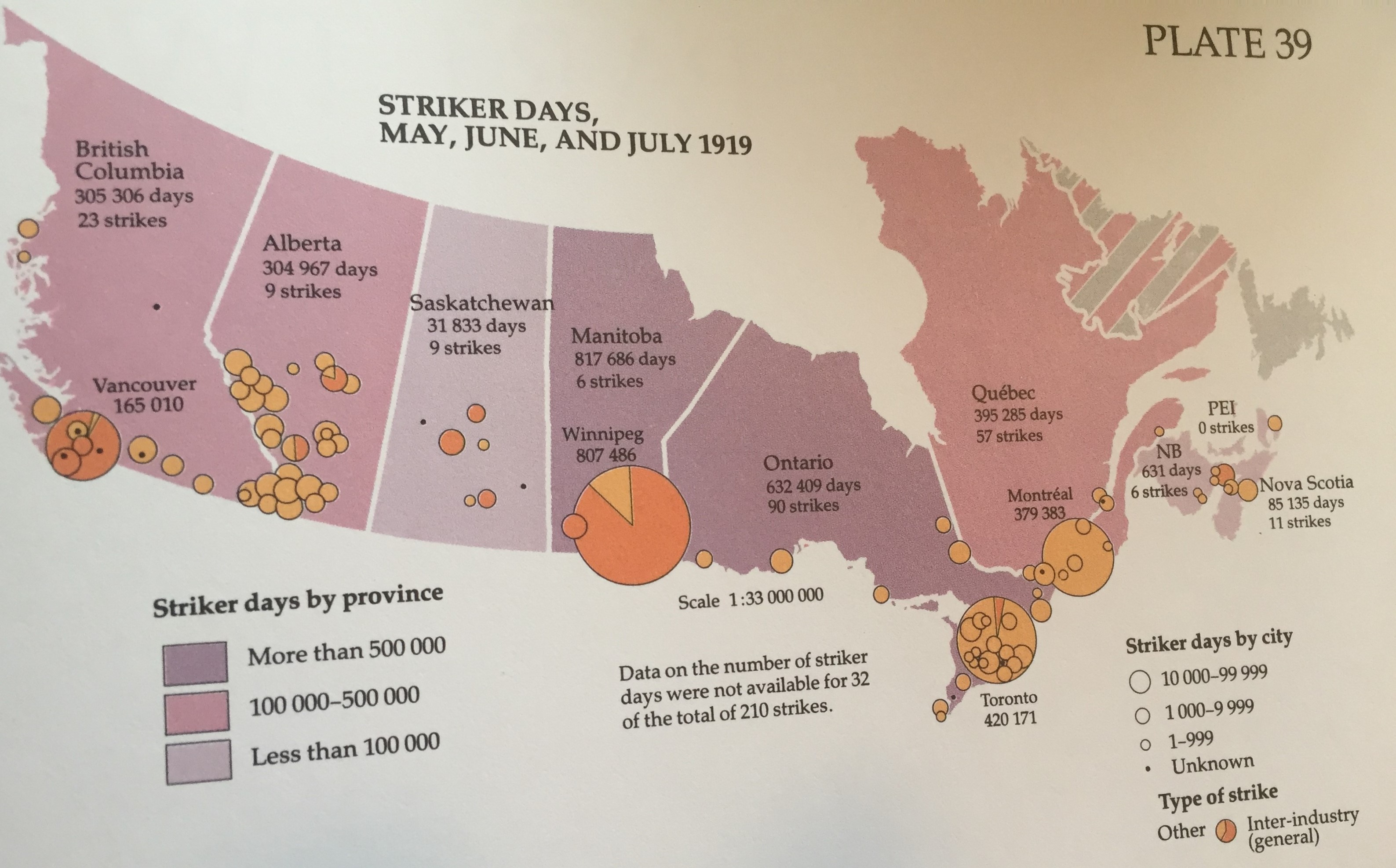 The first major post-war conflict divided Montreal along class lines and was compared to a civil war by one newspaper. In December 1918, a common front of 1,500 newly organized police, firefighters, sanitary engineers, and waterworks employees went on strike. Organization and strikes in the public sector were then common. What provoked Montreal’s working class was that the Quebec government had recently placed the city under the control of an appointed Administrative Commission when francophone workers expected to exert greater influence over municipal affairs. The Commission refused to bargain, imposed Taylorism, cut the workforce, and marshalled the business community to keep services operating during the dispute using volunteers, strike breakers, and private Thiel Detective agents.

The response was spontaneous and massive in working-class districts. Strike sympathizers set off almost 300 false fire alarms and laid siege to fire halls. They forced volunteers to flee, assaulted scabs, and sent Thiel operatives to hospital. In turn, as in Winnipeg, employers created a Citizens Protective Association and threatened to use military force. This was class conflict on a city-wide scale, and strikers won some important concessions. There were numerous other examples of working-class solidarity. In April 1919, several shops refused deliveries by strike breakers working for the Dominion Express Company, and sympathisers disarmed private guards protecting scabs during a dispute at the Montreal Light, Heat and Power Company.

Workers in Montreal demonstrated a growing distance between established leaders and a rank and file that frequently ignored their advice. Some teamsters left work a week before the strike date. When all 4,000 carters went out, they took control of the streets, pulled working drivers off their rigs, unleashed the horses, and unloaded the cargo onto the pavement. MTLC leaders condemned such tactics and asserted they had no place in a labour movement that promoted discipline and respected contracts, even defending police who protected haulers not on strike.

Montreal was part of the growing continent-wide strike movement in May and June 1919 when more than 12,000 workers in numerous industries were on strike and another 15,000 were threatening to walk out. This period reveals differences between a secondary leadership of socialists and craft unionists defending AFL policies. No strikes were explicitly called to support the Winnipeg General Strike; every group of workers had its own demands. Vickers Shipyard workers pressed the MTLC to call a general strike in support of Winnipeg strikers, but the Council refused to consider the motion. The Marine Trades Federation at Vickers established links with other strikers at Dominion Textile, for instance, producing a joint publication for six weeks. This division had national, linguistic, and ethnic elements because most socialists were immigrants while few were French Canadian. Still support for Winnipeg workers was evident in demonstrations and socialist strength was greater in the Montreal labour movement than within the MTLC, as socialists frequently belonged to unions not affiliated to the Council, including the Amalgamated Clothing Workers and the British-based Amalgamated Society of Engineers. The strike movement came to be viewed as a threat to craft unions and as the tide was turning against Winnipeg workers, MTLC leaders and AFL officials made strenuous efforts to discourage militancy in Montreal.

Montreal workers appear to have been attached to international craft unions. Many were reluctant to abandon organizations that they had invested in heavily over decades. There may have been other reasons for this support. The drive for uniform rates in railway shops provided greater benefits in Central Canada where wages were lower than in the West. Another motive to maintain ties with the AFL was that when Quebec workers moved to seek work, they often went south to the United States, so carrying an AFL union card was advantageous. Perhaps this accounted for the smaller degree of support for the OBU.

Still, even an AFL stronghold like Montreal could be forced to consider a general strike. At midnight, 31 December 1919, waterworks workers went on strike once again. As in 1918, Montreal’s trusteeship refused to negotiate and attempted to defeat the unions with help from engineering firms, the Canadian Pacific Railway, and the Harbour Commission. Strikers were replaced but the City was unable to maintain the water supply for ten days in some areas. The Administrative Commission’s anti-union actions prompted one of the largest MTLC meetings ever and forced cautious craft union leaders to threaten a vote on a general strike if minimum demands leading to an acceptable settlement were not conceded. The President of the Labour Council, J.T. Foster, made every effort to avoid a vote on a general strike and succeeded despite enormous pressure from delegates. He claimed he took more abuse from his own members than at any other time.

Quebec workers, both women and men of numerous linguistic and ethnic backgrounds, demonstrated a strong desire for effective unions. They were often willing to work in concert, taking simultaneous strike action, and even threatened a vote on a general strike. Montreal workers remained strongly attached to international craft unions and these were the principal vehicles for militancy. It was largely their growth and combativeness that prompted the Catholic Church to provide the funds, personnel, and press support to push for a Catholic labour movement in Quebec to replace secular unions that included socialists and that were vehicles for class conflict.

Geoffrey Ewen is an Associate Professor in the History Department and the Canadian Studies Program at Glendon College, York University.